As many of you know, I have been tracking scoring chances this season for all Flyers games. But in addition to tracking simple scoring chance +/- I have also been recording individual chance stats for each player. We're about halfway through the regular season, so I thought this would be a good time to pause and evaluate the roster. Before we get started, take some time to familiarize yourself with the terminology!

Scoring Chance: Any play directed at the net from within the scoring chance area. Includes missed shots, but does not include blocked shot attempts. 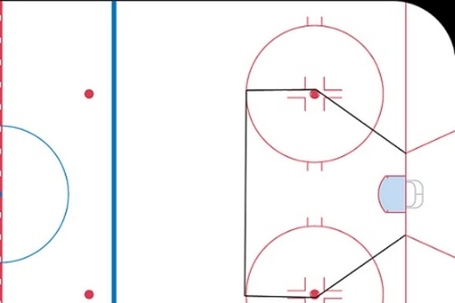 The scoring chance area is roughly defined as the homeplate shape shown above. Shots from outside of this area are not counted as scoring chances. There are some exceptions for screen plays or fancy puck movement, but this is the general rule of thumb.

Chance For: If a player is on the ice for a scoring chance directed at the opposition's net, he gets a +1.

Chance Against: If a player is on the ice for a scoring chance directed at his team's net, he gets a -1.

SC +/-: Just like traditional plus/minus or shot differential, the sum of all chances for and against while a player is on the ice.

Set Up: A set up is awarded to a player for any play that sets up a scoring chance. Think of these as potential primary assists. Includes passes, rebounds, etc

Chance: A chance is awarded to a player for physically directing the puck at the net from the scoring chance area. Think of these as potential goals. Includes shots, deflections, etc

Involved: The sum of all of the set-ups and chances a player is directly involved in creating.

Stat/60: Different players get different amounts of ice-time. Creating stats per 60 minutes of ice time allows us to directly compare every player on the roster, regardless of their time on ice per game. But we still need to keep overall sample size in mind when evaluating players.

For a full, in depth look at the Scoring Chance Project, consult Derek Zona's excellent write up found here.

Now! Lets move on to the meat and potatoes.

Even Strength and PP Data

All of these numbers can be a bit overwhelming. So I'm going to isolate and sort players by Involved Per 60. This will show us who creates the most offensive chances per 60 minutes of even strength ice time.

So we've got some interesting results right off the bat. Voracek is the most offensively efficient player on the roster. Giroux is involved in the most scoring chances period. And Michael Raffl despite limited ice time overall is showing us why he belongs in a Top-6 role. In fact, the team's depth chart is almost perfectly reflected in these numbers. A clear gradient from 1st liners to 4th line role players and eventually to the most "defensive" defense men. Lets take a closer look at the forwards at even strength!

As I mentioned, Voracek is involved in more chances per 60 minutes than any player on the roster. He's also leading the team in overall SC +/- by wide margin and has been among the better Flyers at preventing chances against. Yet he's only 10th on the Flyers in Points/60. We might expect Jake's production to get better as the season goes along if his strong possession and chance numbers continue. This sounds crazy considering Jake's 2nd on the team in points at the moment, but there's definitely the potential for more even strength production. If you take into account all of Jake's underlying numbers over the past couple of seasons, I think you could easily make the case that he is the best overall player on the team.

Giroux isn't far behind Voracek in offensive chance production but is out-pacing him in both even strength and PP point production. Though he's producing offense like the star he is, his defensive numbers leave something to be desired. He's 2nd only to Downie in CA/60. In fact, he's been on the ice for the 3rd most chances against on the entire team, just behind Coburn and Grossmann. He's still a net positive on the ice, but not by much. I'm not sure why his numbers diverge so strongly from his linemates. Hopefully it improves over the second half of the season.

Flyers fans haven't been quite sure what to make of Raffl. Is he a legitimate top line forward or is he being carried by his linemates? At first glance, his numbers look fantastic. He's involved in a ton of chances per 60 and been one of the best defensive forwards on the team. He's even producing more points per 60 minutes than Giroux or Voracek. At this rate, its fair to expect much more point production out of Raffl moving forward. The sample size is small but I would be cautiously optimistic.

Hartnell's exceptional possession numbers are no fluke. Although his chance production is clearly a step below the young guns, he's still good enough for 4th on the team in INV/60. Like Voracek, his point production has lagged behind because of awful shooting luck. But he's been solid defensively, and if he's current point streak is any indication, his luck may be turning around.

Vinny's numbers are perhaps the most surprising out of anyone on the roster. Lecavalier has been one of the worst possession forwards on the team, posting Jay Rosehill-esque numbers. He's been that bad in the shot differentials. Yet his chance numbers are good for 5th in INV/60. Although he has been porous defensively, until now he's made up for it with strong offensive numbers. Vinny might be due for some regression in the second half of the season.

Like other members of the shut-down line, Read has struggled to limit chances against. He's been a net negative in chance differential but is almost breaking even in shot differentials. Although he's involved in a large percentage of offensive chances relative to his teammates, he's giving up just as many chances against. Read's line in general has been subject to some extreme highs and lows. Everyone remembers the stretch of games where the 3rd line was carrying the team. They just haven't been able to sustain that type of success, especially recently.

7th on the team in offensive involvement, and surprisingly strong numbers in the CA/60 category. He has been one of the better forwards in preventing chances against, albeit against relatively weak competition. But he's still a net negative chances and shot attempts overall. His actual point production is far outpacing his underlying chance numbers. Fair to say he's been lucky. However, the 2nd line has been much improved since the addition of Hartnell. Schenn might be able to ride that wave into a strong second half of the season.

Coots' numbers have been trending downward of late. Only a few weeks ago it looked like he was ready for a breakout party but now he's clearly struggling. He's given up a ton a chances against and hasn't compensated with much offense. He's a -22 in chance differential and his recent performances have dragged down his Corsi numbers as well. The 3rd line needs some help! Its remarkable the types of defensive assignments this kid has been getting at only 21, but its clear he has a ways to go before assuming a true Top-6 role.

Simmer has definitely struggled for the better part of the first 40 games. However he's been on fire recently in both chances and possession, and if those strong numbers continue you should expect Wayne to start climbing this list. He's smack in the middle of the pack in almost every metric, but he's producing more points per 60 than any other regular starter. You can chalk some of that up to luck, and some of it up to the 2nd line's recent offensive bonanza. Let's hope Simmer's production isn't a mirage and he can continue to put up points in the second half.

Downie has the worst numbers out of any forward getting Top-9 minutes BUT its tough to fairly judge him at this point. He's played far fewer minutes than anyone else and he's spent time on the 4th line, which is basically a death sentence for your differentials. When he was getting consistent minutes on the 3rd line, he wasn't terrible. If he can earn his spot back, I'd expect the numbers to improve for Downie.

The assorted cast of 4th liners have all been equally bad. All the truculence and grit in the world can't save them from being an offensive black hole. These 4 have the worst chance differentials on the entire team. They give up roughly 70-75% more chances against than chances for. Suffice to say, they are a huge liability, and their ice time is justifiably limited.

That's all for the individual evaluations in Part 1. I'll be taking a closer look at the defense in Part 2. For now, lets move on to the powerplay. Again, I'm going to sort the data by Involved per 60.

Some general observations to note:

I've also been tracking chances on the PK, which you can see below. This data set is sorted by SH TOI. So few players are used on the PK that the data is crowded out by lots of extreme outliers. Sorting by TOI lets us focus only on the players who contribute the most PK time.

OKAY, so we've been through a ton of data and barely scratched the surface. Lets take a break for my sanity and yours. I'll be back with Part 2 and a closer look at the defense very soon. This project is the culmination of many long nights and well over a hundred hours of work. Please take the time to comment and discuss!!! I will be making my full data set freely available to anyone whose interested in taking a closer look. Also look for a follow-up written by Pierce looking at the correlation between my data and the Flyers Corsi numbers. Thanks for reading guys!