Today, we got to see two fantastic posts from RedWire detailing his scoring chance data from the first half of the season.

If you haven't already, please check out these two articles. The first one details the scoring chances for forwards, the power play, and the penalty kill. The second post details the defensemen scoring chance report. It's some great stuff that of course took a lot of great work by RedWire.

RedWire was gracious enough to allow me to use his data for this post. I wanted to show the relationship between Corsi and Scoring chances. One of the biggest complaints about Corsi is that it doesn't account for shot quality. However, there has been a lot of work to show that while there are definitely differences in shot quality in the short run (i.e. a breakaway is more likely to go in than a point shot), over the course of a season a team's scoring chance stats correlate very well with their possession stats.

Eric showed this in an article two summers ago, where he found a correlation between .8-.85 (depending on the cutoff level for games played) between a player's Fenwick % and his Scoring Chance %. This is pretty remarkable, as you can see just how strongly Fenwick correlates to Fenwick.

Further work by Eric in that article showed that a player's ability to out-chance his Fenwick % (i.e. having a higher or lower scoring chance % than his Fenwick %) was basically irreproducable from one season to the next.

And while work like Eric's and others has pretty conclusively shown the link between possession metrics and scoring chances, I thought it would be interesting to do the same thing for the half season of data RedWire provided me with 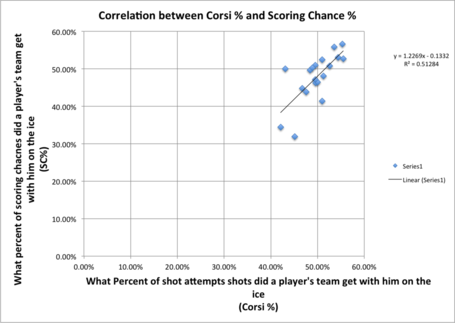 This r-value is slightly less than Eric found in his article, but he was using full seasons of data and more players, so the increased sample size of his data made it correlate better with the scoring chance data.

Just for kicks, I also looked at the data for Fenwick %. I expected lower correlations, since at a half season of data, the increased sample size of corsi would be beneficial. The below graph confirmed my guess. 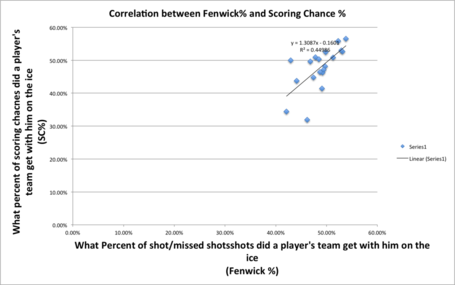 One interesting thing to note: In both graphs, there are two notable data points that are well below the best-fit line and the rest of the dots. Those would be none other than Adam Hall and Zach Rinaldo. Both players' Corsi/Fenwick % are higher than their scoring chance %. While it may be that these two have some weird inability to get good scoring opportunities, it is more likely that their low ice time (both under 300 even strength minutes) is causing the scoring chance data and possession metrics to differ slightly.