The 33-year-old center hasn't fared very well in his first season in Philadelphia, and his play continues to worsen. What the heck is going on?

Sometime last week, Kurt posted BSH's internal roundtable discussion regarding the Flyers' pre-Olympic break MVP. Unfortunately, the email chain died right before there were talks of a least-valuable player. So we're going to pick that back up right here.

Vincent Lecavalier's time in Philadelphia hasn't gotten off to the start most fans were hoping for. That's pretty evident. Let's take a deeper look at what's happened throughout his first 59 games (46, really - he missed 13 due to injury) as a member of the Philadelphia Flyers; is the Vinny hate warranted? Can No. 40 really be considered the team's LVP through the season thus far?

(Note: All stats were gathered from Extra Skater and Hockey Analysis. Go check both of 'em out. They're saviors.)

The signing and first glance

The Philadelphia Flyers originally announced the multi-year contract for the 6'4", 215-lb free-agent center through a press release on Saturday, July 6, 2013. The five-year deal, worth $22.5 million overall, was awarded to Lecavalier after he had been bought out by the Tampa Bay Lightning a little less than a week before.

First impressions? Confusion. In buying out Daniel Briere, the Philadelphia Flyers had finally opened up the logjam at center that had plagued the team throughout the past two seasons. Albeit an elite producer, Lecavalier wasn't exactly what this team needed. Philly's forward corps was already stacked, especially at center, and there were still question-marks regarding the backend.

Kurt touched upon the best and worst case scenarios for Vincent Lecavalier's 2013-2014 season in BSH's season preview, published back on September 18. First up, the best-case scenario:

Vinny stays totally healthy, keeps up or even slightly improves on his production from the past few seasons, and runs one of the best second lines in hockey with Schenn and Simmonds on his wings (helping Schenn along to a breakout year in the process). He also makes the team's second power play unit another legitimate force to be reckoned with, rather than just a break from the first unit. Maybe he'll miss some games, and the team will be a bit worse off in those games. But assuming his talent doesn't totally fall off a cliff this year, he should be able to provide a big boost to the Flyers' top-6, and should be pretty fun to watch in the process.

Lecavalier's health problems are even worse than usual, and in the games he plays his aging decline speeds way up and he's clearly not the same forward he was even just a year ago, and we're saying "just four more years" when we write this preview again next fall.

So, which scenario does it sound like we're entertaining as the team returns from the Olympic break?

Okay, Vinny hasn't looked the best (or even adequate) this season. Everyone seems to agree on that. The 33-year-old center has been slow carrying the puck through the neutral zone, and he's getting hemmed in the defensive zone despite his sheltered role on the second line with Brayden Schenn and Wayne Simmonds. He's missed some games due to injury - 13 - but the team seems to be just a bit more cohesive and better at maintaining possession when he's not in the lineup.  He's on the wing now, and he hasn't looked the least bit comfortable.  All of these are bad things.

Lecavalier's looked pretty deadly on the wall above the dots when he comes out with the second-unit power play, but, in terms of positives, that's about it. Vinny's lack of speed isn't a detriment to the power play once possession in the offensive zone is achieved. It is, however, a big, big problem at even-strength. His play at even-strength has looked markedly worse compared to last season, and, as a result, his production is suffering.

We already know that the second-line has been pretty sheltered all season long, and yet they're still losing the possession battle at even-strength. Is it because of Vinny?

Let's take a look at how badly Lecavalier affects his teammates' 5-on-5 play.

Stay away from Vinny

Lecavalier struggling at 5-on-5 is a small predicament in its own right, but what can the coaching staff do when almost every single linemate Vinny is placed with performs much worse when they're forced to share ice-time with him? It's no longer only about Vinny.

Lecavalier's played with almost every other top-12 forward at one point or another this season; of those 11 other forwards, he's shared at least 83 minutes of 5-on-5 ice-time with 5 of them: Brayden Schenn, Wayne Simmonds, Sean Couturier, Matt Read and Claude Giroux (basically the first to third lines.) He's spent most of his 5-on-5 time on the second line with Brayden Schenn and Wayne Simmonds, over 207 shared minutes a piece.

There's enough data here for a with or without you analysis, which is a way to measure a selected player's impact by comparing how the Corsi percentages of players on the same team differ while that player is on and off the ice. In this case, we can take a look at the 5-on-5 shot attempt differential of players that share ice-time with Vincent Lecavalier and the 5-on-5 shot attempt differential that those same players have away from him. 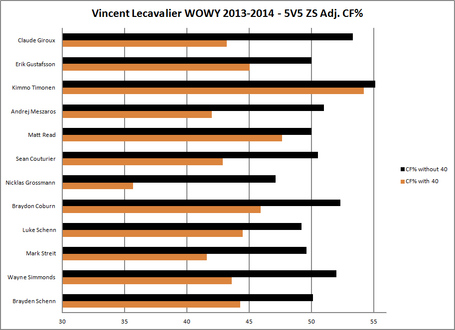 Jesus. I feel so bad for Brayden and Wayne; what Lecavalier does to those two is staggering...

Vinny's WOWY from the first 59 games of the season shows that every single player that has shared over 83 5-on-5 minutes with Lecavalier gets a higher percentage of shot attempts when he's not on the ice with them. Every single player. Luke Schenn and Mark Streit, chastised for their own bad play at one point or another this season, look pretty dang respectable away from Lecavalier.

And Nicklas Grossmann looks decent. Grossmann's Corsi-For percentage jumps almost 12 percent whenever 40's not on the ice. 12 percent! Grossmann's shared the fifth-highest amount of 5-on-5 ice-time with Vinny (a little over 145 minutes.) Grossmann's putting up pretty okay possession numbers away from No. 40.

Lecavalier's Corsi-For relative to his teammates (-5.2 percent) is the worst of any forward with at least 44 games played, or 75 percent of the season, not named Zac Rinaldo or Adam Hall. To put it lightly, he's been pretty upsetting to watch.

Could management have seen this coming?

Vinny's been totally disappointing this season, but should management really be at fault? Should they have seen his decline coming? Yes and no.

Lecavalier's decline had already started a long, long time ago; it's been in progress since the beginning of the 2010-2011 season:

In taking a look at individual shot rates, individual fenwick rates and individual corsi rates, Lecavalier's decline, from 2010 on, is pretty evident. Less traffic to the net, possession, whatever. Call it what you want. Vinny began to lose his ability to drive play. That's quite likely due to aging, and the decrease in speed, increasing likelihood of injury, etc. that comes along with it.

Lecavalier's possession metrics were starting to tail off, so what did Philadelphia management see in Lecavalier that would cause them to push hard for his signing? It's pretty simple: Lecavalier notched the highest points per 60 minutes of 5-on-5 ice-time of his past 6 seasons in 2013, the year before he was bought out. Playing primarily with Martin St. Louis and Matt Carle will do that. 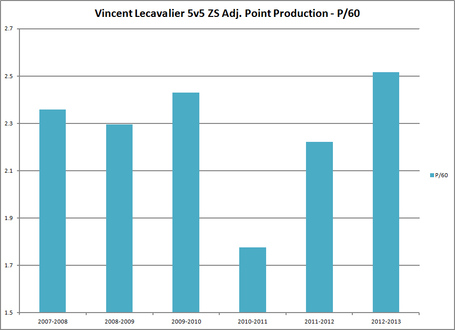 It's extremely flawed to look at production and production alone, and Vincent Lecavalier is the perfect example. Although he was an elite producer, there were many signs that pointed to his eventual decrease in ability to positively drive play at even-strength. Vinny's game was on the decline from the moment he put on that orange and black jersey. We can also take a look at Lecavalier's WOWY from his final season with the Tampa Bay Lightning (2012-2013), before he was bought out: 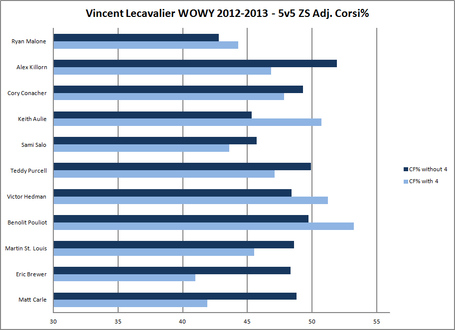 The results aren't as profound as the ones this year, it seems, but 7 of the top 11 players who shared over 83 5-on-5 minutes with Vinny saw their shot attempt percentages decrease with him on the ice (including the aforementioned Martin St. Louis and Matt Carle). Were the two sets of data above enough to say "Vinny was sure to come into Philadelphia and struggle"? Of course not. But it should have been acknowledged -- management could have noticed that Vinny's highest P/60 of the past six years was masking his deteriorating individual shot attempt differential.

Could Philadelphia have expected such a sharp decline in Lecavalier's play? Probably not. But they could have seen the decline, no matter how big it turned out to be, coming.

It seems there's a large amount of people that believe injuries have played a very big part in Lecavalier's decline this season, as he's already missed 13 games due to a facial injury and back spasms. But it's not like he has underperformed for a mere week or two. He's been downright awful all season long.

So that's interesting... it seems that Vinny had been better at driving play at even-strength after his injury had occurred.  Sure, the back spasms may still be lingering and affecting his game in some fashion, but his possession numbers have actually increased since they started appearing shortly after his back injury.  Those numbers are terrible regardless.

So it doesn't seem to be the injury that's affecting his game, and it's not just about Vinny anymore. The more 5-on-5 ice-time he eats up, the worse his most frequent linemates perform. It may seem like he's trying to save face and contribute to this team, but he's actually a big detriment; it's getting kind of depressing to watch.

It seems that the coaching staff doesn't really know what to do with Lecavalier at this point. Why does Vinny continue to receive a little over 12 minutes of 5-on-5 ice-time per game? Why potentially disturb Brayden Schenn's development? Why put this amount of money into a player who will only continue to decline and thus potentially force the Flyers to hastily deal with their logjam at center? Who knows.

Is he capable of playing first line minutes for the tail-end of the season with Claude Giroux and Jakub Voracek? Not really. He'll drag down a line that's been clicking since the beginning of January. Capable of playing on the third line matched up against tough competition with Sean Couturier and Matt Read? Absolutely not. The coaching staff would never relegate Lecavalier to the fourth line, so, what does that leave? The second line, I guess, where he'll still be on the wing.  Sorry, Brayden and Wayne...

As soon as Vinny's play had started to deteriorate (pretty much from the get-go this season), there were talks of trying to "jump-start" him, to get him back to form, to get him back to contributing. It's gotten so bad with him on the ice at even-stength, that, at this point, you can't continue giving the man ice-time just to "try to get him going again." He never was "going" in the first place. It's been all downhill from the start.

Vinny's been atrocious at even-strength this season, and it seems his only remaining redeeming qualities can be found in the 40-second shifts that the second line power-play unit is on the ice. That's definitely not enough to keep him in the lineup. The depressing part of this all? Because of management's usual M.O., the Flyers have their hands tied and have to keep him playing him.