Flyers vs. Penguins preview: Let's do this one more time

The Flyers look to sweep the home and home in Pittsburgh after some utter domination yesterday at the Wells Fargo Center.

Share All sharing options for: Flyers vs. Penguins preview: Let's do this one more time

Let's face it -- the Flyers freaking owned yesterday's game and made the Penguins look like a pee wee hockey team. But as we noted, that means nothing without a win today in Pittsburgh.

Yesterday was just completely awesome. The Flyers got solid contributions from pretty much every player and just dominated play for an entire 60 minutes. Hell, even Luke Schenn of all people made a beautiful stretch pass to spring Vincent Lecavalier for a successful breakaway. If that seems like a typo, you're probably not alone, but let that be an indication of just how freaking amazing the Flyers were.

The chart below shows cumulative shot attempts by both teams throughout the game. The takeaway here is that Flyers came out strong and just never let their foot of the gas. 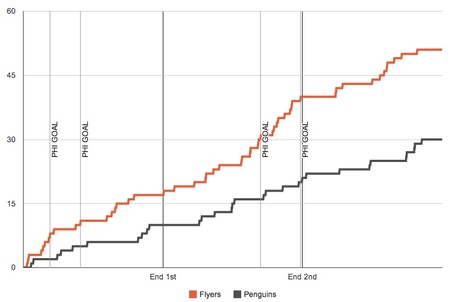 Seriously, after the third goal you'd think they might back away a bit. But no, they just kept laying on the awesome until the final horn. I honestly want to get that chart framed.

Sure, Pittsburgh is icing a team right now that is basically a bunch of scrubs plus Sidney Crosby and Evgeni Malkin, but they've been injury plagued throughout the entire season and are still sit atop of the standings. That very fact should prevent the Flyers from being lulled into a false sense of security, and if you listen to Claude Giroux, it seems like they're going to approach today's game with the right mentality.

Couple the fact that the Pens are looking for blood with the prospect of Chris Kunitz (who was a late scratch yesterday) returning, and it becomes clear that today's game is no slam-dunk for the Flyers.

The Flyers haven't been in Pittsburgh since November when Ray Emery led them to a 2-1 victory. Since then, the Penguins have established a disgustingly good record at home -- they've lost only 6 games there since October. Sure, the Flyers have a tendency to do pretty well in the Consol Energy Center, but that stat is still pretty damn scary.

Emery will likely get the start today, which is good since we should probably back away from overplaying Steve Mason as we enter the final stretch of the season. We haven't seen Emery in a while due to injury, but hopefully he returns to Penguins-slaying form quickly. UPDATE (3/16 11:30): Looks like Mason will get back to back starts. Let's see how that works out.

A win today would be the third straight against the Pens and a very important one given the schedule the Flyers face in the coming weeks. I can't think of a better way to start a tough stretch than by embarrassing the crap out of the Penguins, so the Flyers should do that.

Game starts at 12:30 and is nationally broadcast on NBC because these games are awesome. Pittsburgh sucks. Go Flyers.