The Philadelphia Flyers week ahead: It doesn't get easier

The Flyers dominated the Penguins over the weekend, but the schedule won't get any easier this week. Here's your guide.

Share All sharing options for: The Philadelphia Flyers week ahead: It doesn't get easier

Chicago comes to town for the first time since January 2012, a game the Flyers squeaked by 5-4 thanks to a last minute power play goal by James van Riemsdyk. The big news for the Blackhawks will be the impending arrival of Teuvo Teravainen, the 2012 draft pick who just finished his final season in Finland and is expected to come to North America (assuming he wants to play for a Stanley Cup instead of a World Championship). Chicago needs to get clever with the salary cap to fit him in, but it'll probably work out.

In time for the Flyers on Tuesday? That seems doubtful, but we don't need to explain why/how the Blackhawks are a dangerous team without him. They're the damn Blackhawks. Beating them will be very difficult.

Okay, so the Stars don't suck, but they have been extremely up-and-down lately. They're in the same precarious playoff positioning as the Flyers, sitting with 75 points in the final Western wild card spot with Phoenix right on their heels.

Goaltender Kari Lehtonen is back for the Stars after missing time with a concussion, which should help as Dallas is coming off a 7-2 drubbing against Winnipeg and a loss to Calgary in which they blew a two-goal third period lead. Before those two losses, they won three straight.

The Stars play Pittsburgh Tuesday before coming to Philly.

The St. Louis Blues are currently the best team in hockey. They're in Philly for an afternoon game on Saturday. The Blues score with the best: three players with 50 points, four players with at least 20 goals. They have a deep blueline, and as a Ken Hitchcock-coached club, you know they play team D well. Ryan Miller is their goalie.

The Blues have points in all eight games so far in March, seven of them wins. They are very good.

The playoff picture and your weekly rooting guide 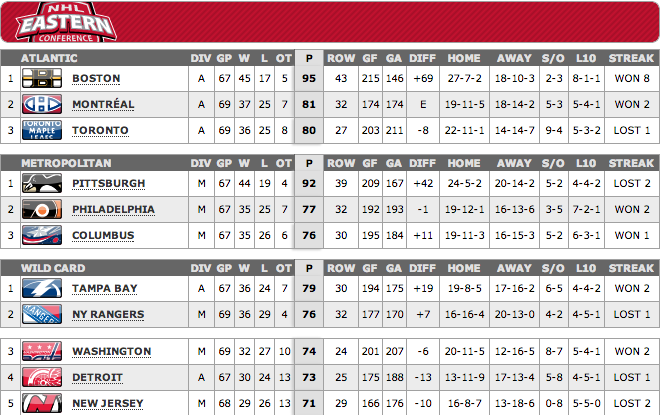 It's tight. Here are the games that matter this week. Root for the teams in italics, even if it makes you want to vomit.