After a stellar weekend, the Flyers will have to forget and move forward to keep building momentum. They take on the Chicago Blackhawks tonight at 7:30.

With the Flyers hosting a four game home stand against a handful of strong competition, I certainly hope that the "all ice is home ice" saying is put to rest. For a team that held a ten game win streak at the Wells Fargo Center earlier in the season, perhaps playing at home will still provide an edge.

We're continually keeping tabs on the Flyers monstrosity of a schedule, but this past weekend about as perfectly as it possibly could have. The Flyers routed the injury-wracked Penguins, earning four huge points that the team desperately needed in order to keep their head above the surface of Metropolitan Division-flavored nonsense. It was a great weekend for hockey.

Looking forward to Tuesday's competition, the Blackhawks have been going through a rough patch as of late. They've gone 5-5 in their last ten, which is decidedly below average for them. Underperformance coupled with key injuries have made Coach Joel Quenneville respond by hacking at his lineup. Here's a look, via DailyFaceoff: 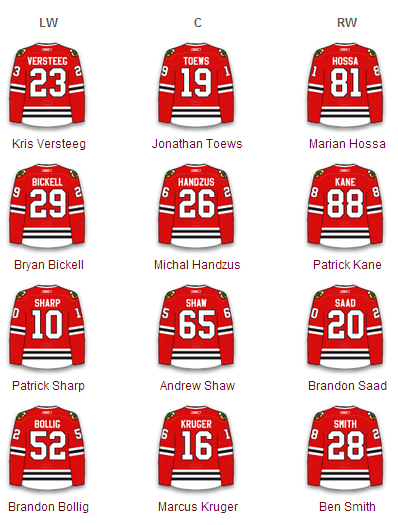 I don't understand a lot of those choices, particularly putting a guy who's tied for tenth highest goal scorer in the friggin' league on the third line. The Blackhawks top three scorers -- Kane, Sharp, and Toews -- are all separated. Quenneville is obviously looking for those guys to spark the production levels of guys like Versteeg, Bickell, and Handzus, who have all been struggling mightily. It seems a bit ridiculous to me, but I guess the Blackhawks can afford to take some risks because of their record.

They shouldn't be taking too many risks, though, because it's been one step forward and two steps back for Chicago as far as injuries are concerned. Marian Hossa, who was out of the lineup for five games with an upper body injury, returned for the Blackhawks game against the Red Wings. He notched three points on the night. However, left wing Brandon Saad exited the same game with an upper body injury and will not play against the Flyers. That's definitely a break for the Flyers.

Of course, this doesn't necessarily mean the Flyers are going to have their way with the Hawks. There's a lot to be said about Chicago's offense even when it isn't firing on all cylinders, just because their superstars are of such a high caliber. Also, their top defensive pairing, Brent Seabrook and Duncan Keith, are complete maniacs. They're both in the top twenty in points and top fifteen in assists for defensemen. Similarly, Chicago's line shuffling will make it hard for Berube to match lines the way he'd like to simply because the Blackhawks major weapons are so evenly distributed over three lines.

Tonight's game certainly doesn't have to yield the same result as the Flyers last meeting with the Blackhawks and really, you have to hope that it won't. After two consistently good showings against the Penguins, the Flyers should have all the confidence they need to keep producing wins. Ray Emery gets the start in goal for the Flyers. He played the last time these teams met.

If the Flyers manage to kill off any penalties and knock in a few power play goals, I think they take this one home.

Tonight is a big night in the division, as all Metropolitan teams will be battling for points. Pray for happy, standings-friendly results. Go Flyers.