Flyers vs. Blues preview: The best measuring stick yet?

The Flyers have won four in a row and are playing the best hockey they've played all season, but they'll have another stiff test this afternoon when they face the league-leading St. Louis Blues.

Share All sharing options for: Flyers vs. Blues preview: The best measuring stick yet?

We've spent a lot of time in the weeks since the Olympic break ended talking about how much of an uphill climb it was going to be for the Flyers down the stretch. Look at that ridiculous schedule! How are they going to win any games? How many points are they going to get?

Well. Don't we look stupid now. The Flyers come into this afternoon's game on a four-game winning streak, and have been very competitive in all four of those wins. They're winning and -- for the most part -- looking darn good in doing it, and they've taken their playoff position from precarious to a good bit more secure.

But the tough opponents aren't gonna stop any time soon -- and today, in fact, might be the toughest one the Flyers have faced yet.

Indeed, this afternoon's opponent, the St. Louis Blues (the only remaining team the Flyers haven't played yet this season), currently sit atop the standings in the Central Division, the Western Conference, and the entire NHL. They can clinch a playoff spot with a win today -- becoming the first team in the Western Conference to do so -- and the reason they're able to do so this far in advance is because they're very, very good.

They're able to win games in a lot of different ways, because they've got just about everything that most teams are looking for -- skill, physical ability, speed, intelligence, possession skills, sound defense, you name it. They're third in the NHL in both goals-for (3.16 per game) and goals-against (2.22), and there's not any easy way to end up with more goals than them when the final clock hits zero.

And of course, at the trade deadline, they picked up Ryan Miller, a good goalie who's been even better than his usually-good self this year. Miller (who will be in net today) is, of course, pretty familiar with the Flyers because of things like this. And the orange and black have typically played pretty well against him (Miller sports a career .902 save percentage in 29 starts against the Flyers, playoffs not included). But in any event, he's been excellent no matter what uniform he's wearing this year, and only lost a game in regulation for the first time with his new team last Wednesday against Chicago in his ninth start for the Blues. Couple his strong play this year with St. Louis' great defense and you have to figure goals will be at a premium today. 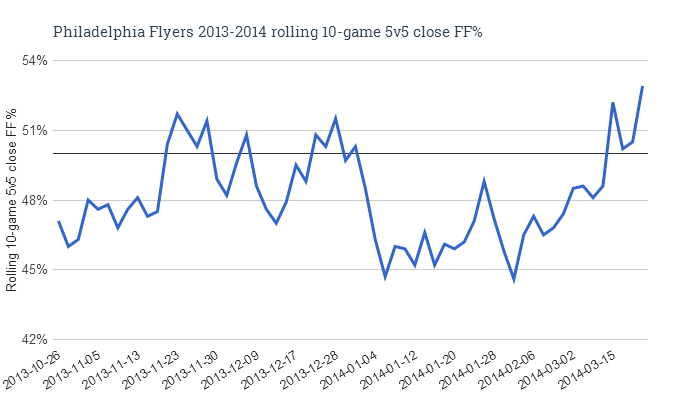 The Flyers' Fenwick Close percentage is 52.9 percent in their last ten games, a season-best. (Click to enlarge)

All of that said, as mentioned earlier, there are reasons for optimism here. We talked about how the Flyers are playing the best hockey of their year right now, and that's fairly evident -- you can see it based on their recent record (7-1-1 in the month of March), goal differential (+11 in that same time), possession-based numbers (per the graph on the right, courtesy of ExtraSkater.com, the Flyers' shot differential in close games over the last ten games is at 52.9%, the highest it's been all season), and really just by watching them play. They've looked as active as they have at any point this season, and they're being rewarded for it.

And they've done it against pretty good teams. Can they do it today, against possibly the best team in the NHL? I don't know. But this is a huge test, and maybe one that will tell us a lot about how the Flyers really do stack up.

Steve Mason is probably your starter in net, following his great game on Thursday against Dallas. Puck drop at 1. In the meantime, I answered some Flyers questions for our friends as St. Louis Game Time so feel free to kill some time reading those (and if you haven't already, go read their answers in response to our questions from yesterday).