The Phantoms winger has been called up for the fifth time this season. He'll step in (maybe) for Steve Downie, who was injured yesterday on an awkward collision.

Very early on in Saturday's 4-1 home win over the St. Louis Blues, Flyers winger Steve Downie ended up face-down on the ice following a collision with Blues forward Patrik Berglund. I say collision because I don't think there's a better way to describe what ended up being a really awkward hit, as Berglund raised his shoulder up and Downie sort of just skated head-first right into it. You can see video of the incident here via TVA Sports. No penalty was called on the play.

Downie left the game at the 45-second mark of the first period and didn't return, and the Flyers announced this afternoon that he'll be considered day-to-day with an upper-body injury. Whether or not that's them just not wanting to call it a concussion or if it's something else that they don't feel like telling us about is anyone's guess. But it seems like a pretty safe bet that he'll miss at least a few games.

Taking Downie's spot will be Adirondack Phantoms winger Tye McGinn, who's now been called up to the Flyers five different times since the regular season began. McGinn hit the 20-goal mark on the season for the Phantoms last night in a 4-2 Phantoms loss, tying him with Jason Akeson for the team lead (while having played in nine fewer games). In eight games for the Flyers this year, McGinn has tallied three goals.

The transaction is the second of the Flyers' four AHL call-ups that they are allowed to make post-trade-deadline (Cal Heeter having been the first).

McGinn, as mentioned, could probably make the drive from Glens Falls to Philadelphia with his eyes closed by now. Here's his trip log from the last two seasons, via prosportstransactions.com: 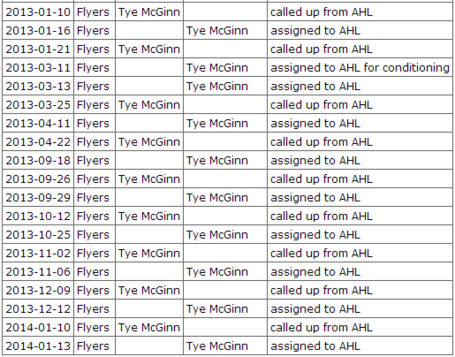 With McGinn in the fold, the next question becomes how exactly the Flyers plan to put together their lineup without Downie. Recently-extended winger Michael Raffl is probably the best candidate to take his place on the shutdown line with Matt Read and Sean Couturier, but are the Flyers willing to take him off of the fourth line that's looked much, much better of late with him on it? If they are, do they put McGinn on the fourth line (something they've typically been unwilling to do with him in the past) or does Jay Rosehill take that spot? And if they do keep Raffl on the fourth line, are they comfortable slotting McGinn in with Read and Couturier, or are they forced to bump someone from one of the top two lines down?

Lots of decisions to be made. But in the meantime, welcome back, Tye.