Michael Raffl extension: A deeper look at the rookie's season

Paul Holmgren signed Michael Raffl to a two-year extension over the weekend. Let's look at what Raffl's done this season and figure how good of a move it was.

Share All sharing options for: Michael Raffl extension: A deeper look at the rookie's season

By now you probably know that Michael Raffl will return to Philadelphia next year, and by all indications, that's probably a good thing.

On Saturday, immediately after the Flyers defeated the St. Louis Blues 4-1, general manager Paul Holmgren announced that Michael Raffl signed a two-year, $2.2 million contract extension. Details of total payment each year are still under wraps, but we know that it will cost $1.1 million against the cap, up from around $800,000 this year.

Charlie took a nice analytical look at Raffl back in December and found some pretty tasty nuggets. Since then, Raffl's gotten 35 additional NHL games under his belt and his usage on the ice has been altered quite a bit.

On the heels of his contract extension, let's take another deep look at how Raffl has contributed to the Flyers, and whether or not keeping him was the right move. (Statistics cited below are through Saturday's games.)

Raffl's production can be summed up in one word: respectable. He currently has nine goals and 21 points in 57 games, which is not too shabby given this is his first year playing on North American ice. He ranks 24th in rookie scoring across the NHL, which is, again, not amazing but not something to dismiss.

While his production is not so flashy now, there are a few things worth noting. Raffl has, in recent weeks, seen most of his ice time on the fourth line. Playing with Adam Hall and Zac Rinaldo is bound to hinder your ability to put the puck in the net, so we have to cut Raffl some slack here.

Is Raffl another Read, or another Nodl?

Back in December, when we hadn't seen quite as much of Michael Raffl's work, Charlie took a look at the young winger's production to date.

Is Raffl another Read, or another Nodl?

And it's not like he is getting a good number of minutes -- he currently plays just 10.7 minutes of even strength hockey per 60 minutes. The only people who have get fewer even strength minutes on the Flyers this year are Rinaldo, Hall, Chris VandeVelde, Kris Newbury, and Jay Rosehill.

Considering he's shown some signs of brilliance and has immeasurably more hockey sense than most fourth liners in the league, those trends will likely change. Craig Berube has already demonstrated that he's comfortable putting Raffl on multiple lines, and perhaps Raffl's low minutes this year are just a way of conditioning him into NHL hockey. Regardless of why Raffl isn't seeing much ice time with quality teammates, we can be fairly certain that he'll get a promotion sometime soon (more on that below).

That being said, it should be noted that he's coming out relatively better than some of his teammates. For example, both Wayne Simmonds and Lecavalier have offensive to defensive zone start ratios very similar to Raffl's, but generate less than 50% of all shot attempts when they are on the ice. I think it would be hard to argue that Lecavalier and Simmonds are duds (well, maybe Lecavalier), so we probably shouldn't put too much stock into this stat when judging Raffl.

Berube isn't really using Raffl against top competition, but we'll chalk that up to Raffl being used primarily on the fourth line. Also, unless your name is Sean Couturier, your coach is probably going to shelter you a bit in your rookie season.

The graph below, courtesy of ExtraSkater.com, sums up Raffl's usage relative to his fellow Flyers: 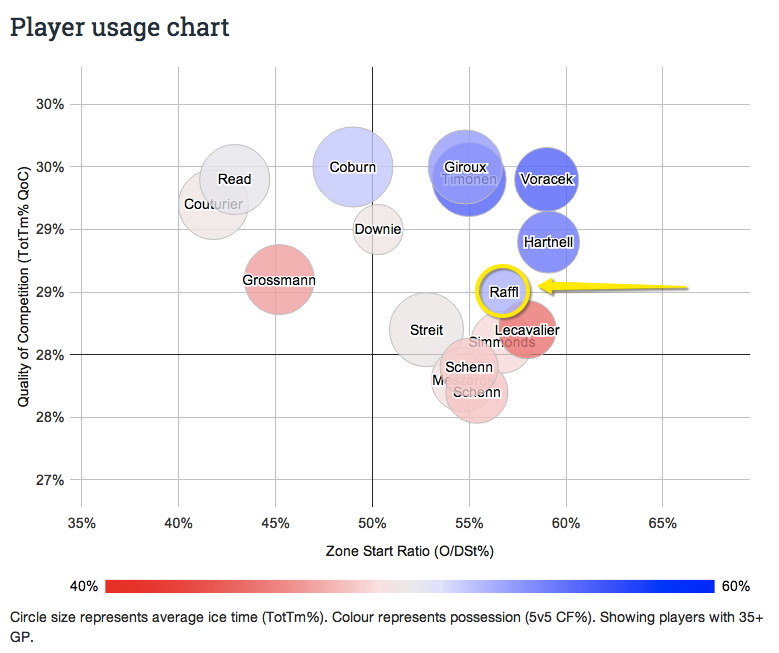 Of course, no look at Raffl's usage would be complete without noting his contributions to the penalty kill. Raffl's seen just under 100 minutes of short-handed time this year, and has been pretty darn good with his partner Adam Hall. His shot attempt percentage while shorthanded is 14.7 percent --good for 84th out of the 326 NHL players who have seen 50 minutes or more of shorthanded time. Again, not bad at all for a rookie.

Probably the most encouraging thing about Raffl is the fact that he improves the play of his teammates, and in a very big way.

Kurt noted on Saturday that Raffl has seen time on a number of lines this year, finding himself beside Claude Giroux and Jakub Voracek on the top line, playing a shutdown role with Sean Couturier and Matt Read, and more recently taking out the trash with Zac Rinaldo and Adam Hall.

The graph below shows how the above forward teammates have been in puck possession with and without Raffl. 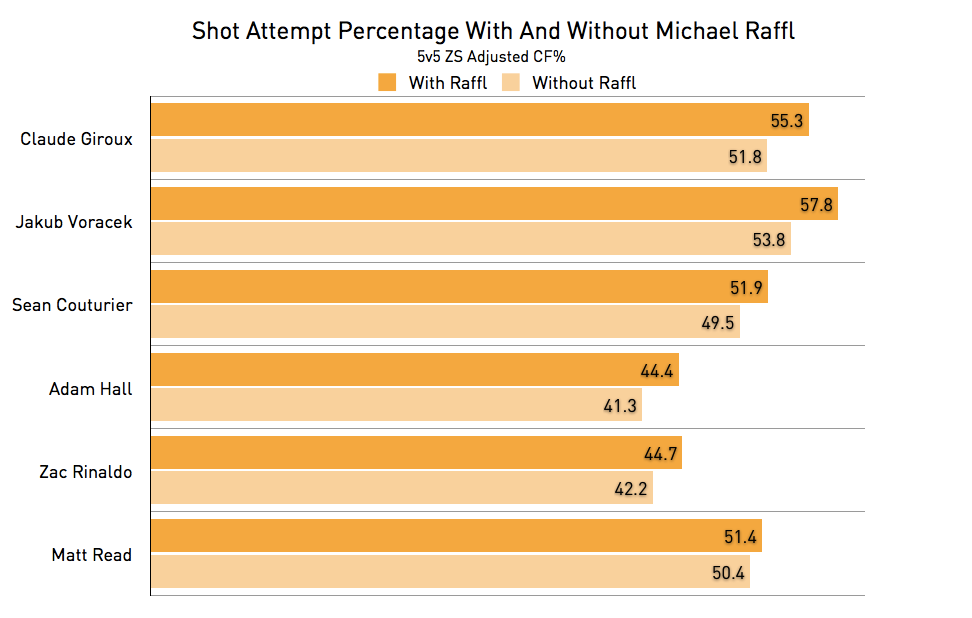 The first thing that jumps out here is that no matter who he's playing with, Raffl is improving his linemates' play. Moreover, it's clear that his biggest contributions come when he's playing on the top line with Giroux and Voracek, a nice indication of where he could be headed if his production ever catches up with the underlying possession numbers.

In terms of possession, Raffl is one of the more dominant Flyers on the ice. He currently ranks fifth among his fellow Flyers in shot attempts with 52.5 percent. Even though those strong possession numbers are somewhat of a byproduct of favorable zone starts and weak competition, it's still pretty impressive to see a rookie break the 50 percent mark in shot attempts.

And it's not like Raffl is only facing scrubs from opposing teams. The graph below shows his shot attempt percentage against the 20 NHL players he's opposed the most this season. The dotted line indicates the 50 percent threshold. 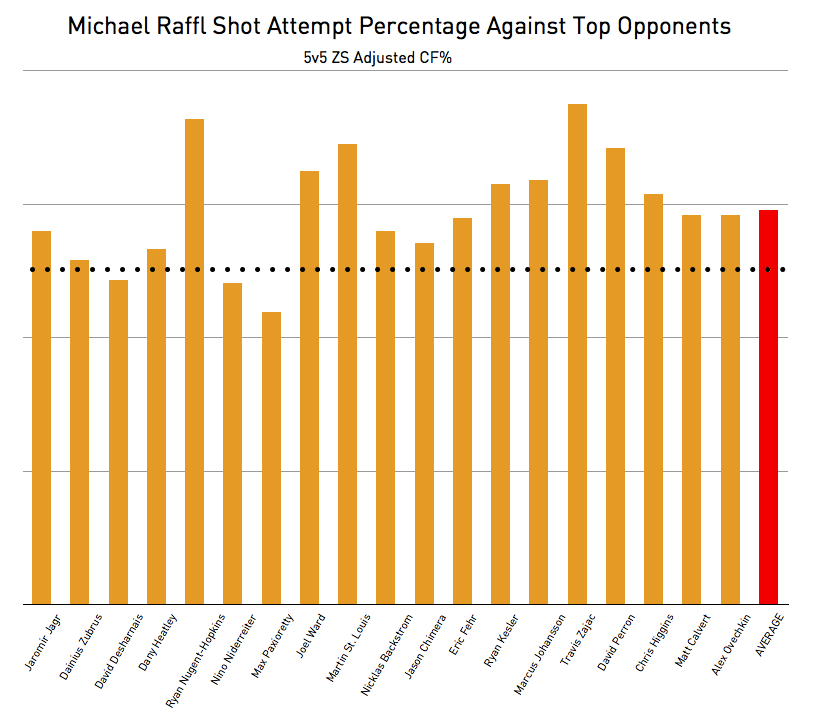 Sure, there are some not so great players in that graph, but it's hard to argue that guys like Jaromir Jagr, Martin St. Louis, and Alexander Ovechkin are playing poorly. Indeed, Raffl has played against some of the NHL's best, and more often than not comes out positive in possession.

Given that Raffl's positives -- solid penalty killing, positive impact on teammates, and overall good possession stats -- strongly outweigh the negatives, it's hard to come out and say this contract extension was a bad move.

Of course, some will express concerns over whether signing a 25 year old rookie is a good idea. We've certainly seen some late bloomers who have dropped off precipitously after a solid rookie campaign -- looking at you, Ville Leino -- but sometimes they end up being diamonds in the rough like Matt Read.

All in all, even if Raffl ends up being a bust, this contract is so low risk that it won't matter. Paul Holmgren seems to have made a smart move, and if you put any stock in the stats mentioned here, you might even say he got a deal.