In the three years since he arrived in Philadelphia, Wayne Simmonds has become one of the best physical, netfront presences on the power play in the entire NHL, if not the single best.

Last Thursday, Flyers winger Wayne Simmonds scored what would end up being the game-winning goal in the Flyers' 4-2 win over the Dallas Stars. Here was that goal, which came with 7:39 remaining in the game.

The tally was Simmonds' second of the game and 23rd of the year. (He would go on to get an empty-net goal in Saturday's game against St. Louis, upping that total to 24.)

I sent out a few tweets about Simmonds later that night after the game, with a thought or two about his playing style. Following the last of those tweets, an internet person on Twitter asked me a question about the 25-year old Toronto native:

@Kurt_BSH how many goals this season do u remember him scoring not within like like a 10 foot radius of the crease? none xcept 2nite for me

It made me think a bit. As anyone who watches the Flyers on a regular basis could tell you, "snapshot from the top of the circle to score at 5-on-5" is not a common description of a goal scored by Wayne Simmonds. (Especially since that goal was actually Simmonds' first 5-on-5 goal in 13 games, but that's beside the point.) I was pretty sure there were one or two more goals like that, but I couldn't remember them.

So I hit the video on NHL dot com and briefly reviewed each and every one of the 22 non-empty-net goals Wayne Simmonds has scored this year, took note of how each goal was scored, and charted exactly where they happened. I also separated them into even-strength and power-play goals, since the ability to score on the power play is one of the best assets Simmonds brings to the Flyers. (I lumped in an extra skater/6-on-5 goal in with the power play tallies.)

The findings are below. As the key indicates: blue dots are rebound goals scored off of another teammate's shot, black dots are rebound goals scored off Simmonds' own shots, purple dots are goals that went into the net following a Simmonds deflection of a teammate's shot, and green dots are clean shots taken by Simmonds (i.e. off of a teammate's pass or a carry-in). For clarity's sake, the red faceoff dots were removed from the diagram.

It's interesting: of the eight goals Simmonds has scored at 5-on-5 this year, really only one of them -- a deflection of an Andrej Meszaros point shot in Colorado on Jan. 2, noted by the purple dot on the left side above -- has been a dirty, rough-and-tumble goal that he's renowned for scoring.

Of the other seven, four of them came directly off of turnovers in the neutral or offensive zone, another two of them came on odd-man rushes from the other end of the ice, and the other one -- the goal against Dallas on Thursday -- involved Simmonds carrying it in and creating the shot himself.

Those power play goals where Simmonds collects the garbage? None of those at even strength. Not one.

Those power play goals we seem to see every third game where someone puts a shot on net and Simmonds is right there to collect the garbage? None of those at even strength. Not one. Only one of them (the black dot on the left, in a game against the Islanders on January 20) saw Simmonds even picking up his own rebound, and that came after a bad turnover that gave him enough time to have two chances all alone in front of the net.

Now granted, it's obviously a lot harder to do the things Simmonds does at the power play -- establish himself in front of the net, jockey for position, and deflect the puck and/or get to and control the rebound before everyone else on the ice -- at evens, when there are five guys wearing different-colored sweaters as opposed to four or three. And it's tough for a team to consistently establish possession in the offensive zone long enough to make that a reality (especially on this Flyers team, which hasn't been a great 5-on-5 possession team as is).

On the other hand, this chart probably looks exactly as you'd expect it to, and it starts to tell you how much of (and what kind of) a player Simmonds has become in his time with the Flyers:

With one exception -- a snapshot from the left circle past Henrik Lundqvist on March 1 -- every one of Simmonds' 12 power play goals this year has come within a couple of feet of the goal crease. Several rebounds off of teammates' initial shots, a few deflections on shots en route to the net, and even a few finisher's goals created off of his own plays or passes from teammates.

Again, this shouldn't be surprising, given that anyone who's watched this team's power play at all over the past three seasons knows that this is Simmonds' thing and he's really really good at it. But the degree to which it's held true is pretty noticeable when you look at it this way.

How many guys in the NHL play that same netfront power play role as well as Simmonds?

We've got through this whole piece so far and not even mentioned the fact that Simmonds currently has more power play goals this season than everyone in the NHL but two guys: Alex Ovechkin (the best winger in hockey) and Chris Kunitz (the winger who plays on the power play with the best player in hockey). Both of them play a bit differently than Simmonds, which prompts the question: how many guys in the NHL play that same netfront power play role as well as Simmonds?

I think the answer might be "none". Yes, when it comes to camping out in front of the goal and scoring with the man advantage, Wayne Simmonds might just be the best in the league at it at this point.

Here's the list of all of the guys in the NHL with at least 10 power-play goals this season, as of Sunday night: 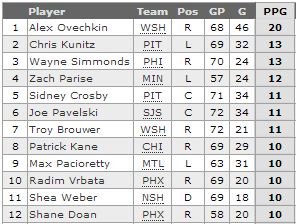 And in the interest of expanding the sample a bit, here are all of the guys with at least 25 power-play goals since Simmonds joined the Flyers in 2011: 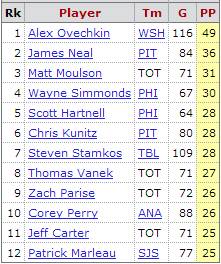 You look at those lists, and with maybe a couple of exceptions (Chris Kunitz and Troy Brouwer), those are a bunch of really, really talented hockey players. Most of them aren't scoring like Simmonds -- they're scoring goals by using space to make moves and get in a prime scoring chance area, or by simply unleashing wicked shots on goal. That's not to say they won't score the occasional dirty goal, but it's not at Simmonds' level.

Sure, there are guys who are great at scoring down close to the net. Shane Doan, for instance, had his fair share of rebounds and deflection goals. Zach Parise has pretty much mastered the finish after taking a pass at the side of the net. Thomas Vanek and Corey Perry are really, really good at pointing their sticks in juuuuust the right angle on deflections, and Matt Moulson (particularly in his time with the Islanders) has wreaked havoc in multiple ways in that area between the high slot and the top of the crease. Even Jeff Carter, for all the (bad) jokes about how he's a soft one-dimensional player, has a number of goals on the power play that have come from just standing in front of the net and tracking the puck well.

Matt Read does it all. BSH's Kevin Christmann examines his game and delivers some much-deserved praise.

A closer look at Michael Raffl

Paul Holmgren signed Michael Raffl to a two-year extension over the weekend. Let's look at what Raffl's done this season and figure how good of a move it was.

But there's been no one who's been as predictable and as consistent in their ability to find the puck right around the crease and put it into the net as Simmonds has been. It goes to show just how good at this Simmonds has become: that everyone and their mothers knows what's going to happen and where he's going to be, and he's still managed to score as much as he has. He's simply become a dominating force there.

And remember, we're just looking at the goals he's scored himself -- you think Scott Hartnell is fifth on that list above without Simmonds' work in front? Does Claude Giroux have 19 power play goals over the last three seasons without Simmonds getting over to screen the goalie?

That said, some credit has to be given to the other guys on the Flyers' top PP unit: Claude Giroux, Scott Hartnell, Jakub Voracek, and even Kimmo Timonen are all guys who command their fair share of attention, and are all still very good at getting shots to the net, giving Simmonds ample opportunity to do his thing. But he's emerged as an anchor there, and opponents can't stop him. For a team that relies as much on its special teams as the Flyers do, that's invaluable.

Now this isn't all to say Simmonds doesn't have his limitations as a player. He's by no means the smoothest player around, he's never been great at the things that fancystat-inclined folk love, like entering the zone with control of the puck or dominating possession of it. A lot of what he does on the power play doesn't always translate to even-strength.

Several Flyers writers have referred to Simmonds as a guy who might be the team's most valuable player this year, and with due respect to Wayne, there's only one correct answer to that question.

But regardless: when the Flyers traded for Wayne Simmonds three summers ago, his résumé included three years of middle-six production with the Kings and no real experience in an offense-oriented role.

If the Flyers' scouts saw something in him in juniors or in L.A. that led them to believe that he could be successful in this kind of role, then they deserve a lot of credit, because they hit a home run on that one. Wayne Simmonds has become the prototypical netfront power play guy that most teams spend a lot of time looking for, and he's a big part of the Flyers' success as a result.