Introducing "Captain Claude": A new shirt from our partners at Philly Phaithful

The regular season comes to a close in a little less than three weeks, and the Flyers find themselves in a pretty damn good position, thanks in large part to their captain. So our friends over at Philly Phaithful came up with a shirt to honor him.

Share All sharing options for: Introducing "Captain Claude": A new shirt from our partners at Philly Phaithful

It's almost April, which means the Stanley Cup playoffs are riiiiight around the corner. Who do we all (primarily) have to thank for where the team currently sits? Dare I say - Claude Giroux?

Introducing -- "Captain Claude", the newest and greatest t-shirt from our friends over at Philly Phaithful. 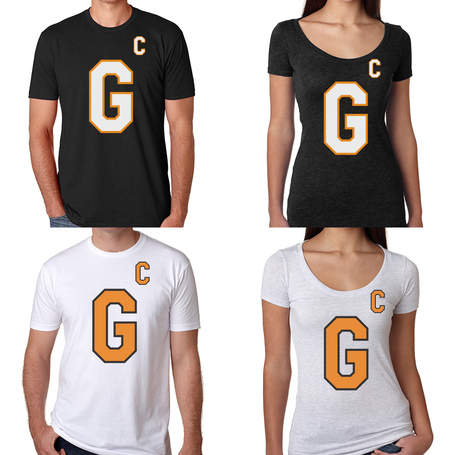 The Flyers have played some of their best hockey of the season over these past two and a half weeks. Claude Giroux's got 16 points in that time-frame (10 games.) He's found himself in the thick of the Hart Trophy conversation. He's averaging 1.04 PPG this season. And on and on and on.

After starting the season with a month of downright awful hockey, the Flyers now find themselves in a pretty nice position -- sitting inside the playoff picture. Who could've thought?

The team's record at the time? 1-7-0. Now that's a captain. And Philly Phaithful's got you covered with some captain's clothing.

Broad Street Hockey readers can use the coupon code "presale" to get 10 percent off the purchase, as the t-shirts will be on pre-sale through this week.

But there's more -- to sweeten the pot even further, Philly Phaithful will award one random purchaser from Broad Street Hockey a free viewing party for a Flyers game of their choice at the Philly Phaithful showroom (date and time to be coordinated.) Booze (21+), 10-15 of your friends and a Flyers game on their 16 foot projection screen -- what's not to like?

So go ahead and show some love for one of the best captains in the NHL.