Bob Clarke is the newest member of the Hockey Hall of Fame's selection committee. Time to lobby for No. 88, Clarkie.

Share All sharing options for: Bob Clarke can now lobby for Eric Lindros on the Hockey Hall of Fame committee

We've argued at least five times here at BSH that Eric Lindros deserves to be in the Hall of Fame. Now, it seems like he'll have a friend on the inside.

Former Flyers general manager (and current team senior VP) Bob Clarke has been named to the Hockey Hall of Fame selection committee. He's one of 19 people who will decide who gets into the HoF next year, and presumably many years into the future. (There's a 20 year limit for those sitting on the selection committee.)

He's just one guy, of course, but he'll be in the room on June 23 and 24 of this year when the committee deliberates. He'll have to convince at least 14 of these peers that Lindros is worthy: 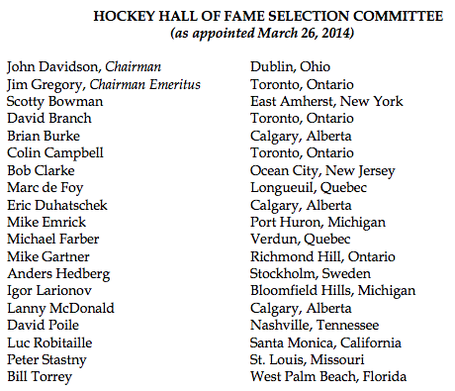 But wait! Bob Clarke and Eric Lindros don't like each other. Why would Clarkie vote for him, let alone lobby for him? Well, that's just a misconception. Consider thisfrom a CBC interview in 2007, when he was asked if Lindros is worthy of the Hall:

"Yes, based on his ability to play the game and based on his contributions as a player. I think you have to separate all the crap that went on. Particularly when he played for the Flyers, it was just outstanding, dominant hockey - the first of the huge, big men with small man's skill.

The standards that were put on this kid were very unfair. Nobody could live up to those standard, and I think he was awful special as a player and awful good.

But he wasn't Wayne Gretzky and he wasn't Mario Lemieux. He was a different type of player, but had he stayed healthy ... he may have been at that standard.

The 2014 Hockey Hall of Fame class will be announced on June 24. They induction ceremony will be held in Toronto on Monday, November 10.