Claude Giroux is very, very good, especially against the Washington Capitals. Maybe not as good as Ryan Kesler, though...

11: the number of goals that Claude Giroux has scored while facing the Washington Capitals over the course of his career -- the most against any one team in the league.

In case you happened to be under a rock or something this past Sunday afternoon, Claude Giroux had 2 goals (and an assist!), including the game-tying goal with 1:05 remaining the the third period, en route to a 5-4 overtime win for the Flyers in Washington D.C.  The two teams will play again tomorrow night, this time in Philadelphia, so get ready for that.

Claude Giroux's done pretty damn well for himself, and for the team, in his 20 career games against the Capitals; the captain's shooting 17.5 percent and has 11 goals and 8 assists in those contests. He's also registered 7 even-strength goals while facing Washington.  Again, the most against any one team in the league.

Below, a graph showing the breakdown of Claude Giroux's 112 career goals by team. He sure does like playing Washington -- a little less than 10% of his goals have come against that stupid red team. 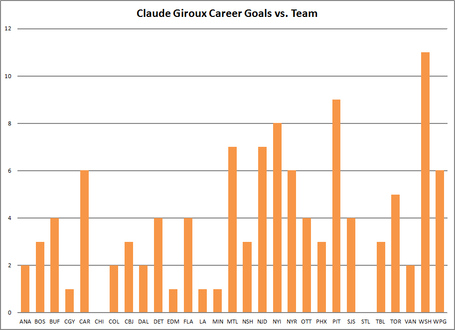 In case you were wondering, Ryan Kesler has scored just 2 career goals against Washington.