Andrew MacDonald traded to Flyers for 2nd, 3rd round picks

Share All sharing options for: Andrew MacDonald traded to Flyers for 2nd, 3rd round picks

The Flyers have added defenseman Andrew MacDonald, a pending free agent, from the Islanders on the eve of the NHL trade deadline. They've given up two draft picks for him.

The Flyers announced that prospect Matt Mangene is going to New York in the deal as well.

We wrote about MacDonald last week, and our basic consensus? "He sucks."

He'll block a lot of shots, he'll play 20 minutes a night and he's super cheap right now on just a $550,000 cap hit before his contract expires in July. But well .... he's just not very good. The Islanders gave him extremely tough minutes against tough competition this season and he crumbled under the pressure. The optimistic side of you should be saying that he'll get easier minutes in Philly and will be better than he was in New York as a result.

But, well, he's far from the answer. He might give you quantity in minutes, but in New York it didn't translate to quality. He's another third pairing defenseman on a blue line full of third pairing defensemen. Consider also that he's getting a raise for next year, and the Flyers just gave up three assets for a guy who a) doesn't really help and b) will be overpaid, if he even stays.

On the bright side, this probably means another guy is going to get traded. The Flyers have like .... 40 of them right now. Andrej Meszaros?

Here's a brief glimpse at our BSH internal chat as the news broke: 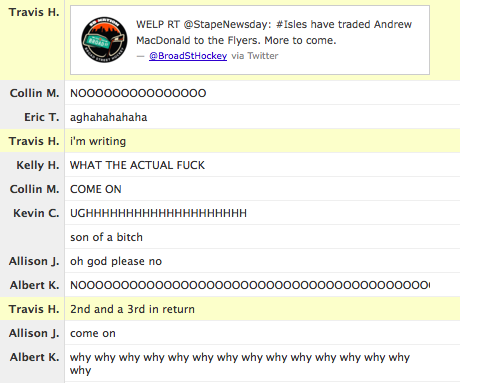 Islanders blog Lighthouse Hockey had a great primer on MacDonald ... and, well, basically, if Islanders fans are mocking you, you're losing.