How have Flyers done at the NHL trade deadline in the past?

With the NHL trade deadline today, there has been a good amount of speculation about what the Flyers will do next. By now you undoubtedly know about the Andrew MacDonald acquisition, and there seems to be a general consensus that the front office isn't done yet. But before we reach Wednesday's 3 o'clock deadline, let's take a quick look back.

When I got down to writing this, I intended to do a deep look into each player the Flyers had traded or acquired at previous season's deadlines. Then I took a look at the total number of transactions, and realized it would simply be far too much work.

Instead, I decided to write a more general assessment of what the Flyers do at the deadline.

To keep things simple (and somewhat relevant), let's start with the 1999-2000 season and define a "trade deadline deal" as one that happened in the three weeks leading up to that year's particular deadline.

Even after chopping the data down, it became clear that since the start of the new millennium, the Flyers have been pretty active around the deadline. The (very large) table below -- pulled from FlyersHistory.com -- shows every deal in detail.

Since 2000, the Flyers have had 34 total transactions around the deadline. I'm not entirely sure how this stacks up against other teams, but it certainly seems like an above-average amount of activity. Below, we dig into the data a little bit more.

How long do deadline pickups stay in Philadelphia?

Get the latest rumors, news & analysis

It's conventional wisdom that trade deadline deals are usually for rental players, but the data for the Flyers somewhat dispels that notion.

The 31 total skaters that have been acquired around the deadline since 2000 have logged 1,877 total regular season games with the Flyers. That's about 61 games on average. Considering the trade deadline typically happens with around 20 - 30 games left in the season, this fact kind of bucks conventional wisdom.

It seems that (at least on average) trade deadline pickups tend to spend more time in Philadelphia than just to play out the season. Sure, there are guys like Pavel Kubina and Kent Huskins who left right at the end of the season (as we knew they would), but the list of deadline pickups is peppered with multi-season players.

And hell, Braydon Coburn was a deadline deal, and as of writing he has logged 517 games with the Flyers.

How good are the players that are picked up?

If you take a look at the master table, you're bound a see a good number of names that you don't recognize or have just forgotten about. Of course, this is a byproduct of the fact that teams are generally wary of making blockbuster deals until the summer.

That being said, when you look at that list there definitely will be some names you recognize -- Coburn and Steve Mason are pretty darn important to the Flyers right now. Adam Oates was good at one point, too.

Overall, the Flyers haven't picked up any offensive power houses at the deadline -- the average player has scored 18 points in his time in Philadelphia. So based on their history, you can expect a typical deadline pickup to give you a point roughly every three games.

All in all, we're talking generally below average players.

What positions are targeted?

When I went through this data, I expected to see a lot of defensemen coming over to the Flyers -- let's chalk that up to short-term memory and current narratives about what the team needs. But when you look at the data, it seems that over the past decade and a half, the Flyers trade deadline acquisitions have been fairly balanced. 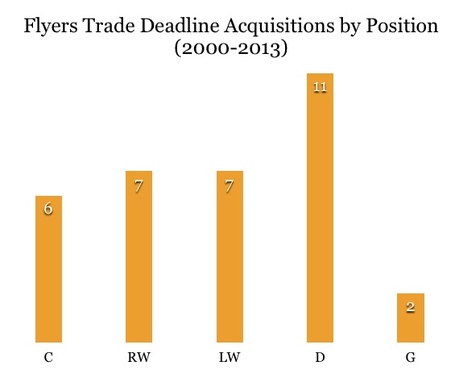 What about the draft picks?

I thought you'd never ask. Of course, the trade deadline tends to see a lot of movement of draft picks -- teams that are making a playoff push are willing to part with a small piece of their future to win now.

As you might suspect, the Flyers have been on the "buying" side of trade deadlines since 2000 -- they've shipped out a total of 28 picks and have gotten back 9.

Of the picks they've given up, most are concentrated in the 2nd-3rd round range. A good number of those picks (that have been used already) have turned into guys that have logged some NHL time. So far, those players have logged a total of 1,545 NHL games, with the leaders being Brandon Dubinsky, Ondrej Pavelec, and Shawn Matthias.

The Flyers haven't gotten any picks that turned into anything of value. Of the four picks they actually cashed in, only one played in the NHL-- Martin Houle, and it was only one game.

So what was the best trade?

For me, there really is no contest here -- it has to be the Braydon Coburn acquisition.

Sure, Coburn isn't exactly a game changing defenseman, and he perhaps didn't live up to his pre-draft expectations, but he certainly is a key piece in the Flyers system. Looking up and down that list of trade deadline acquisitions, no one really comes close to the contributions that Coburn has given to this team.

What's more, the Flyers got him for relatively little -- all they had to give up was Alexei Zhitnik. Zhitnik was a top defenseman at one point, but by the time the Flyers let him go, he was definitely past his prime.

So the Flyers ended up getting a cornerstone on the blue line for a guy who would spend only 87 more games in the NHL. I'd say it's a winner.

And the worst one?

What did they get out of it? An aging star would only dress with the Flyers for 19 games. The Flyers basically sat out of the 2002 draft for 19 games. I still can't get over it.

The takeaway here is that on very rare occasions, the Flyers pull off a trade at the deadline that really helps out the team or completely screws it for the future.

But more often than not, moves are likely to be fairly low-impact. Given the way this front office has acted in recent years, maybe that's for the best.