The Flyers are probably going to give Steve Mason almost all of the remaining starts on their schedule. This has happened before, and it's gone poorly. If they have aspirations of winning a playoff series this year, they should make sure he gets some rest.

Share All sharing options for: Steve Mason needs to rest

It was announced Friday that Ray Emery, who tweaked his groin in the Flyers' first game back from the break against San Jose, won't be making the trip with the Flyers to Toronto. Cal Heeter, the Phantoms' primary goalie this year, will be heading up with the Flyers. The backup goalie situation probably won't matter much, though, given that unless Steve Mason suddenly gets hurt or is just totally shelled in net, he'll almost certainly play the next two games.

With just two games between now and next Saturday's contest against the Penguins, they likely figure that this is a good time to give Mason some rest. Because even when Emery is good to return, all signs are that the Flyers will lean heavily on Mason the rest of the way.

Mailbag: The Schenn Bros, another logjam at center

Earlier this week, BSH took to Twitter to field any last second concerns or questions as the trade deadline approaches. These next few weeks are going to get pretty hectic, you guys

Mailbag: The Schenn Bros, another logjam at center

We already know how tough the Flyers' remaining schedule is, and the coaching staff clearly trusts Mason to be the guy against any remotely good team. He's already started all four of the Flyers' post-break games, and depending on how long Emery is out for, he could end up starting literally almost all of the Flyers' remaining 19 games. There's almost no way they'll give him a night off as long as Emery's hurt, and even when 29 comes back, I could see them starting Mason in pretty much any game that isn't against a bottom-feeder, which could mean he starts as many as 17 or even 18 of the last 19 games.

And while I believe that Mason is a better goalie at this point in time than Emery or Heeter is, I'm fairly positive that if that is the Flyers' plan, it would be a mistake.

Good or bad, goalies need rest. They need some nights off to refresh themselves and catch a breather while the other guy has to stop some pucks.

Know who would probably tell you as much? Steve Mason.

He's been here before

The best season of Steve Mason's career was his first one, in which he won the 2009 Calder Trophy for the Blue Jackets. He played pretty well that year. But his performance fell off a bit down the stretch. Maybe that's just a thing that happens to rookies -- we all saw, ironically enough, Sergei Bobrovsky start his rookie year on fire and then cool off a bit during the post-All Star break portion of the Flyers' schedule.

But here's something that didn't help matters. Mason spent some of early February 2009 dealing with a bout of mononucleosis. The first game he played following his recovery was on February 13 of that year, at which point there were 28 games left in the season. The screenshot below is clipped from ESPN.com, showing those final 28 games on the Blue Jackets' schedule. You'll notice I've highlighted who the starting goalie was in each of those games... 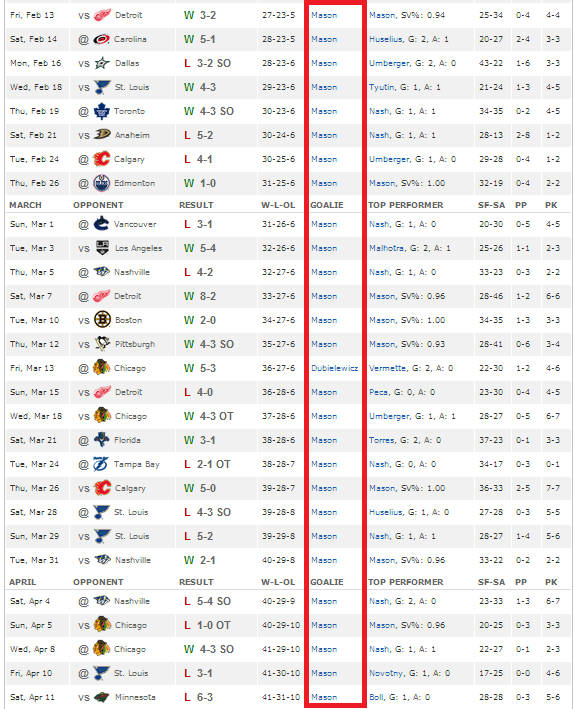 ...and you'll notice that Steve Mason was the goalie in all but one of those games. 27 out of 28. And he played from start to finish in each of them too, only getting pulled in-game when it was late and the Jackets wanted an extra attacker. That's nuts. I had to zoom out on my browser just to fit the entire string of Mason starts into one screen.

Mason put up a .906 save percentage in those 27 starts -- not terrible, given that the league average in 2008-09 was .908, but certainly less than you'd expect of a starting goalie. Unfortunately, things fell apart by the time the Jackets reached the playoffs, as Mason allowed 17 goals and put up a .878 save percentage en route to a sweep at the hands of the Red Wings.

The Flyers aren't a great team, and they likely aren't a serious contender to make it deep into the playoffs. But beyond Pittsburgh, the Metropolitan Division's top team (and even they've got their issues), pretty much every team in the division falls under that same description, and is one that the Flyers could hang with or even beat in a seven-game playoff series.

Having a goalie who's tired as hell from starting every game down the stretch -- not to mention, specifically, a goalie who saw his play fall apart in the playoffs the only other time he's had to do this -- seems like a pretty good way to put yourself at a disadvantage going into what would likely otherwise be a fairly even playoff series.

Starting Mason in every game down the stretch is probably asking for a disaster, whether because of an added risk of injury or added weight of fatigue that would see his performance deteriorate. A little bit of rest could go a long way for the Flyers' starter.