The emergence of the Mark Streit-Nicklas Grossmann pairing

Searching for optimism regarding the Flyers' chances against the New York Rangers? Look no further than Philadelphia's suddenly-strong second defensive pairing.

Share All sharing options for: The emergence of the Mark Streit-Nicklas Grossmann pairing

Following the Olympic break, the Flyers' playoff chances were far from assured. They were second in the Metropolitan Division, but only held a slim lead over the New York Rangers, Washington Capitals and Columbus Blue Jackets. At that point, even the Devils were still in the running.

Combine that with a hellish March in terms of schedule, and it was entirely plausible on Feburary 27th that Philadelphia could miss the playoffs for the second straight year.

Instead, they earned 28 points in their final 23 games, and clinched a berth in the postseason with three games to spare. They even defeated bonafide Cup contenders along the way, such as Chicago and St. Louis.

It wasn't simply good fortune. Steve Mason rebounded from a poor December and January to stabilize the goaltending, and Ray Emery held down the fort as a serviceable backup. Jakub Voracek scored at a point-per-game pace in March and April. Wayne Simmonds added 11 big goals. And of course, Claude Giroux reaffirmed his status as an elite player and forced his way into the Hart Trophy race.

But the Flyers also saw one of their main weaknesses through two-thirds of the season turn into a strength. The much-maligned second pairing of Mark Streit and Nicklas Grossmann not only began to deliver passing results after the Olympic break - they started to excel.

Rebound By the Numbers

A disappointing start to his Flyers career marred by poorly-timed pinches and blown defensive zone assignments did not endear Mark Streit to the Philadelphia faithful. Combine that with the lucrative contract he had signed in the offseason, and Streit became a regular punching bag for many fans prior to the Olympics.

Back in late January, Charlie talked about Nicklas Grossmann. It was not pretty. But is it now a thing of the past?

As for Grossmann, he was coming off a January in which traditionalists and stat-oriented fans alike agreed was one of the worst months of his career. And with every regular Flyers defenseman posting decreased possession statistics while on the ice with Grossmann, a rebound for the 29-year old blueliner seemed unlikely to say the least.

Instead, both Streit and Grossmann improved dramatically after the break -- with Streit approaching near-elite possession territory.

Thanks to the great work of Andrew D., we can also confirm that the Flyers have carried the play in terms of scoring chances with Streit and Grossmann on the ice as well, proving that they were succeeding in generating quality shots as well as quantity. Since the break, Streit has posted a +27 in on-ice scoring chances, while Grossmann is a +3.

Streit's numbers are better than Grossmann's, both when looking at shot attempts (Corsi) or scoring chances. But Streit has received easier minutes than his defensive counterpart, taking 53.88% of his non-neutral zone faceoffs in the offensive zone, while Grossmann comes in at 48.19%.

Regardless of the usage, both players have dramatically improved their statistics since the Olympic break.

Streit and the System

Stats can help us to recognize when players are making improvements to their game. But without watching the tape, it's difficult to identify how the improvements actually occurred.

After analyzing video, the answer is clear in Streit and Grossmann's cases. Their success since late February is directly tied to a team-wide commitment to coach Craig Berube's system and improved communication between the forwards and defensemen, with Streit in particular as a key beneficiary.

Streit's early season struggles are understandable when viewed in this light. After all, he signed with a team coached by Peter Laviolette, and prepared during the offseason to play in that system. With the abrupt firing of Laviolette, Streit was then forced to learn yet another system on the fly. His occasional overaggressive pinches make more sense in light of the fact that Laviolette's system often encouraged such plays.

As the season progressed, Streit slowly became more comfortable on the ice. But it did not truly come together for him until after the Olympic break, as the results show.

This is not to say that Grossmann's play did not improve as well. While his skating and passing remain a weakness, his play in the defensive zone certainly stabilized after his disastrous January. But Streit's ability to jump into the play and generate more offensive zone time has allowed Grossmann to specialize in his preferred stay-at-home role on the pairing.

This sequence late in the first period against the Penguins on March 16th helps to illustrate not only Streit's impact, but also how his comfort level with both Berube's system and his teammates has allowed him to play more aggressively while mostly avoiding back-breaking mistakes.

The play begins as a simple forecheck in the Flyers' zone. Grossmann is battling for the puck in the corner with Marcel Goc, with Giroux providing support. 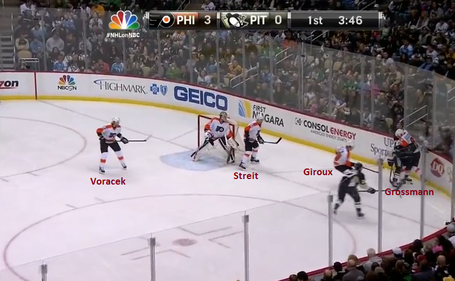 The puck moves up the boards, and Scott Hartnell pushes deeper into the defensive zone in an attempt to win possession. He succeeds, and immediately passes the puck to Jakub Voracek, now flanked by who else but Mark Streit on his right wing. 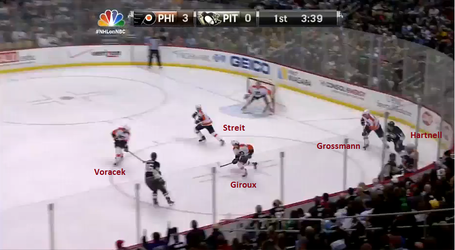 Streit, recognizing that Hartnell will be unable to quickly get back up ice, made a split second decision to jump into the play as a forward. As a result, Voracek is now temporarily playing the middle on the ensuing rush, and Giroux is on the left. 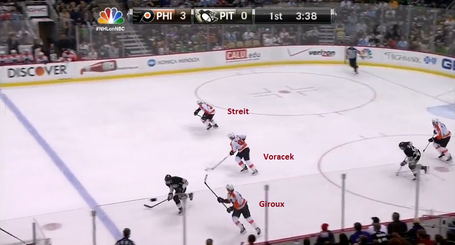 As they enter the offensive zone, Streit has the puck and is now leading the rush with Giroux. The defenseman has two goals: generate a scoring opportunity, and get back to his usual position on defense to protect against a possible counter rush. 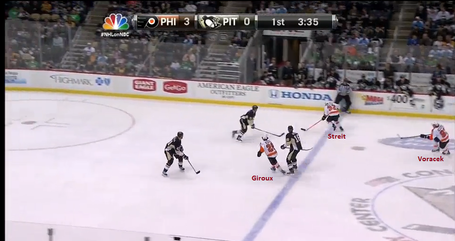 Streit's solution is to drive deep into the Penguins zone and around the net, before looking to pass the puck. 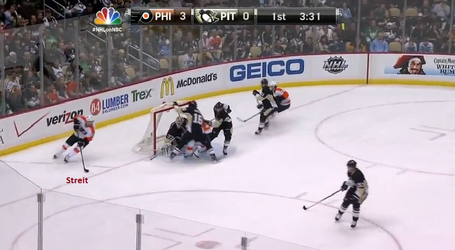 He circles the net, and passes the puck to a "defenseman" at the left point - Scott Hartnell. Now, Hartnell has the puck, and as a forward, has the option of shooting or even carrying the puck deeper into the offensive zone, knowing that Streit will now have the immediate responsibility of replacing him on the point. 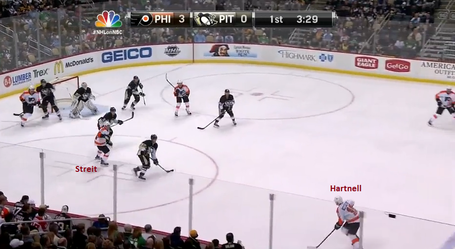 Hartnell takes a shot which hits a body in front, and after a subsequent battle in the corner, the Penguins bring the puck back up the ice. But Streit is already back in his normal position of defense, prepared for the ensuing rush. 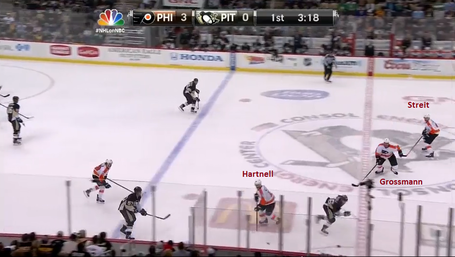 For this play to work effectively, both Streit and Hartnell need to have a very clear understanding of their roles. Hartnell provides support in the defensive zone at the start of the play knowing that if he wins the puck battle, Streit will immediately take his place as a forward, allowing for an efficient zone exit. It's this type of implicit communication that has improved the Flyers' breakout immensely in the second half of the season, and is characteristic of Berube's system.

But most important, Streit never forgets that his main role is that of a defenseman. Circling the net, while aggressive at first glance, in many ways could be considered safer than Streit simply taking a quick shot as soon as he enters the zone. A missed or blocked shot in that case could have the Penguins quickly moving back up ice, pressuring Nicklas Grossmann and Scott Hartnell as the main defensemen and giving Pittsburgh a huge advantage.

Instead, Streit circles the net, ensuring that even if disaster strikes, he's facing the right direction and is already at speed, making a potential backcheck easier to execute. It also gives the other Flyers on the ice a chance to set up in the offensive zone, creating the potential for a sustained forecheck.

It's been this combination of better decision-making from Streit and improved support from the forwards that have contributed the most to the second pairing's success.

Early in the season, the Streit-Grossmann pairing could be fairly called a mess. Streit alternated between passive defense without the puck and overly-aggressive offense with the puck. Grossmann was struggling when initiating the breakout, and even his usual solid positional play in the defensive zone did not prevent a deluge of goals against with him on the ice.

But as the season has progressed, things have dramatically improved. Streit's style is still aggressive, but now it is complemented by the forwards, whose commitment to backchecking and temporarily moving into coverage has allowed Streit to freelance far more effectively.

As for Grossmann, he's cleaned up his game despite dealing with nagging injuries. While Streit pinches and creates offense via the rush, Grossmann stays back to prevent disaster in case of miscommunication.

Since the break, Streit-Grossmann has worked as a pairing of opposites whose styles complement one another. And if the Flyers stand a chance of upsetting the Rangers in the first round and beginning a sustained playoff run, they'll need the second pairing to continue their surprising resurgence.