Rangers vs. Flyers: Should Claude Giroux's line use the dump-and-chase?

Share All sharing options for: Rangers vs. Flyers: Should Claude Giroux's line use the dump-and-chase?

As many of you will know, I've written a lot about the dump and chase. Successful carry-ins generate more than twice as many shots, scoring chances, and goals as dump-and-chase plays do (even after controlling for things like odd-man rushes, dump-ins to get a line change, and the skill of the players on the ice).

Moreover, I believe teams dramatically overestimate the risks of trying to carry the puck in. The time a turnover leads to an odd-man rush and a goal gets burned into your brain, but it just isn't that common -- at least the way teams play right now, failed entries lead (on average) to about the same number of chances against as a dump-and-change play.

Undoubtedly, if a team started pressing harder at the blue line, they'd be taking on some more dangerous situations and we'd see them starting to give up more chances against as a result. But given how much better a carry-in is than a dump-in, I have to believe teams aren't as aggressive as they should be right now.

A change of strategy

Given that perspective, you can imagine how I might have raised an eyebrow at some of what I read in Frank Seravalli's article this morning:

[Ryan] McDonagh's stout work at the blue line has forced Flyers coach Craig Berube to alter his game plan. [...] Berube described the style he wants Claude Giroux, [Jakub] Voracek and Scott Hartnell to play against McDonagh as "unfulfilling." Unless they have a clear break to carry it in the offensive zone, Berube has instructed his players to dump the puck in New York's end, particularly in McDonagh's direction.

"You can't let him force turnovers at the blue line, because he's just a killer," Berube said.

A lot of what Berube said made sense, in fairness. He acknowledged that dump-and-chase isn't the preferred choice, but was noting that this particular matchup might be one that tilts the preferences a little the other way. That's all reasonable, but given my perception that teams are generally way too conservative, any talk of finding reasons to be more conservative makes me nervous.

So I went back to this year's regular season games and looked at what happened on the entries where McDonagh was the defender.

I posted an article last week about the Flyers' individual zone entry defense. For each defenseman, we looked at how often the opponents were able to carry the puck in against him, how often they decided to dump the puck in, and how often they tried to challenge him and he broke the play up. Here's what we found, for comparison's sake:

I did the same analysis for McDonagh in his four games against the Flyers. At 5-on-5, there were 35 occasions where he was defending the player who attempted a zone entry.

Those are decent numbers, but they don't scream "stay the heck away from that guy" to me. I certainly didn't see anything that would make me tell guys like Giroux and Voracek to play it safe.

There was a quote in Seravalli's article from Voracek, noting that McDonagh was particularly tough in their last game. In that game, he was the primary defender on eight entry attempts -- five carry-ins (63%) and one break-up. Giroux and Voracek were responsible for the five carry-ins and the failed entry. Again, it's a decent game by McDonagh, but nothing that really scares me.

Of course, in a sample this size, the numbers might be deceiving. There are always going to be plays where a carry-in is automatic and plays where a dump-in is automatic; the question is how aggressive the team will be on the plays that fall in between. I'm assuming Berube isn't advocating a dump-in on a play like this: 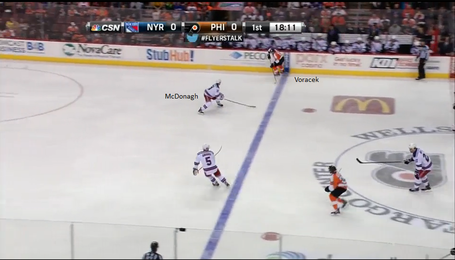 So I rewatched each carry-in attempt by Giroux or Voracek against McDonagh and looked at how much space they had as they approached the blue line, how risky a play it was, and how it turned out.

I pulled screenshots of what was happening right at the blue line on the plays where some judgment was involved: 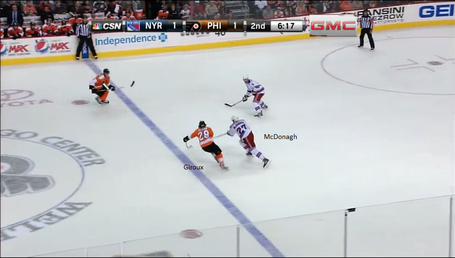 Giroux receives pass just before blue line and instead of tipping it deep, cuts inside McDonagh, gains zone. 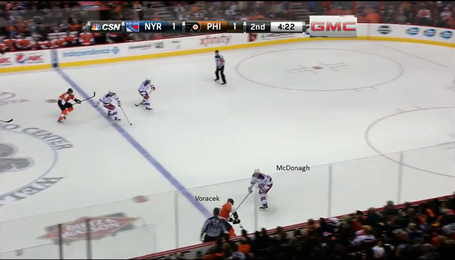 McDonagh challenges in neutral zone, has good positioning, but Voracek presses play to outside and gains zone. 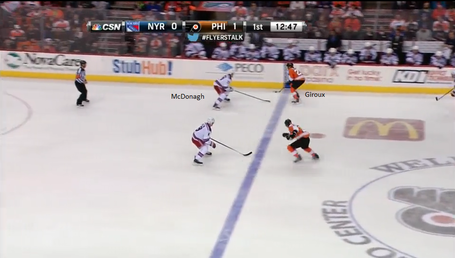 McDonagh challenges in neutral zone, has good positioning, but Giroux presses play to outside and gains zone. 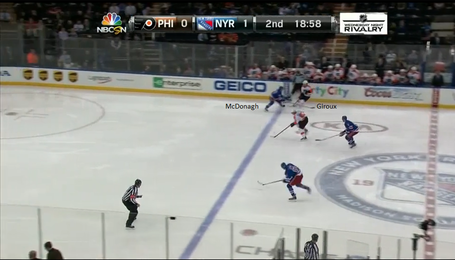 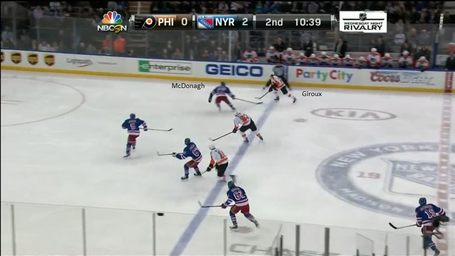 McDonagh has decent positioning but there is a lane to the outside and Giroux takes it, gains zone. 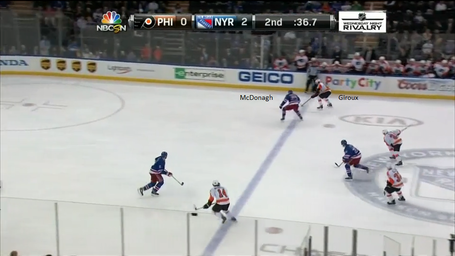 McDonagh has decent positioning but there is a lane to the outside and Giroux takes it, gains zone.

There are a few others where Giroux or Voracek beat McDonagh with a pass as he challenged in the neutral zone. Overall, the two of them combined for 14 entries with possession against McDonagh, three dump-ins, and one failed entry.

I can't see how anyone looks over that tape and concludes that McDonagh's blue line play was stifling their entry attempts and that Giroux and Voracek need to dump the puck in more. Instead, I see them consistently beating him wide and setting up an offensive zone possession.

Let's return to the quotes from Seravalli's article.

"To try to beat him wide with speed, other than Voracek, [McDonagh is] probably going to win that battle a lot of times," [Berube said]

Berube's reason for attacking McDonagh is twofold: to wear him down and also see whether the Flyers can aggravate his sore left shoulder.

I'm starting to wonder if this was all a subterfuge. If they really were planning to change their strategy against him and dump the puck more, why would they share that before the game?

An alternative hypothesis is that they know they've had success beating him wide and are planning to try to exploit that further. They make threats about his shoulder hoping to get him backing off more at the blue line, declare that driving wide on him is all but hopeless, and then...

Well, there's no way to know for sure until we see tonight's game. It's definitely something to watch for though.

Flyers vs. Rangers, Game 1: The playoffs begin at MSG