Let's take an in-depth look at how goaltending has affected the Flyers-Rangers series so far.

.016 -- the difference in save percentage through the first two games of the series between Rangers goalie Henrik Lundqvist and Flyers goalie Ray Emery.

We all knew that going into the series goaltending was going to be a huge advantage for the Rangers, what with Lundqvist being one of the three or so best goalies on the planet, and it's a testament to how the Flyers have played that they've managed to head back to Philly with this series tied up despite that advantage coming to ... wait, what's that? 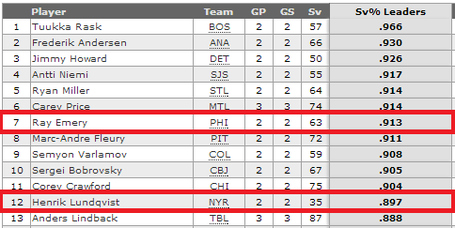