The Flyers were grossly outshot in the first two contests, and have only managed five goals in three games (discounting the empty-netter) in this opening round series. One thing that stands out is the decreased ice time for the Flyers' best players.

One thing that has stuck out to me through the first three games is Craig Berube's usage of what is supposed to be his top line and his top pairing. The playoffs are a time when you typically ride your stars hard. They are your "horses" for a reason, and they got you to the playoffs. When the stakes are raised, you often see coaches resort to shortening their bench and really relying on their top players.

But we're not seeing that.

The Flyers top line consists of Claude Giroux, Jake Voracek, and Scott Hartnell. Giroux averaged 15:44 of even strength ice time and 20:26 of total time in the regular season. Voracek had 13:50 and 17:15 respectively, and Hartnell came in at 13:30 while at even strength and 16:52 in total.

Through three games, those five players are not really seeing the ice time that you'd expect. I pulled the even strength and total time on ice for each player below. Totals in green indicate minutes in excess of their season average. Totals in red indicate minutes significantly below their average. Totals left un-highlighted are minutes that were below the season average, but just barely.

The even strength totals for the top line are not all that different than what we saw in the regular season. However, it's the total time on ice that stands out a bit more. Now, some of this is reliant upon how many power plays the Flyers see, as all three are staples on the first unit.  However, I can't help but think that if your star player, the third leading scorer in the league, isn't getting his normal minutes on special teams, you'd try to find him more time elsewhere.

Claude Giroux seeing just barely over 17 minutes in two of the three games so far is kind of hard to believe. Especially when he was averaging over 20 in the regular season.

You can make similar arguments for his linemates; especially Voracek who was arguably the best Flyer forward in Game 3 and yet had less ice time than Vincent Lecavalier and Jason Akeson.

For all the talk of Giroux and his line struggling to get shots on net, the fact of the matter is they have been one of, if not the best line throughout the series by whatever metric you prefer:

Only three Flyers have more than one point in this series. 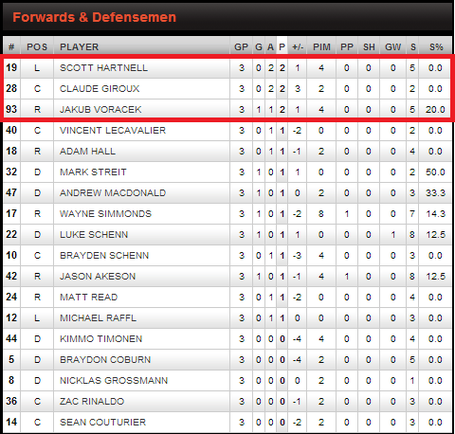 Quick — guess how many 5-on-5 goals the Flyers have in this series without the top line on the ice.

The answer’s zero. One, if you count Luke Schenn scoring on a delayed penalty with the fourth line. But you get the point. 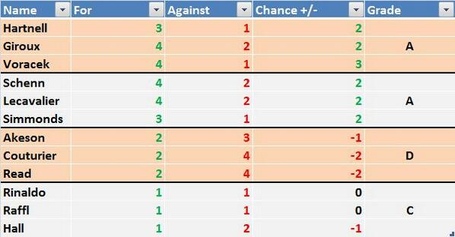 Would we like to see a bit more out of Giroux, the best forward and arguably, the best player in the series? Of course; but it's not as if he's the only one being contained by the Rangers.

The ice time discrepancy is glaringly obvious with the first pairing of Timonen and Coburn. Coburn, the Flyers ice time leader, has been averaging anywhere from ~2 to ~3.5 minutes less of even strength ice time per game; and ~2 to ~3 minutes less of total ice time in two of the three games so far.

Timonen, who certainly has seen sheltered minutes this season, has been under 12 minutes of even strength ice time in two of the three games. He has seen anywhere from ~1 to ~3 minutes less in each game of the series in total ice time.

Now, there is no denying that the top pairing has struggled a bit in this series, so that certainly plays into it. But the difference is quite drastic.

If you're a fan of loose correlations that truthfully mean almost nothing, you could take a look at the chart above and notice that Game 2 was the only game in which most of the top line and top pairing (Timonen being the exception) played close to, or exceeded, their typical ice time. That was the game they won.

The playoffs aren't a time to be reducing the minutes of your best players. It's crunch time; or clutch time if you like terrible slogans. For whatever reason, Berube has seemed to ease off the minutes for the first line and top-pairing. I'd argue that they are the "horses" that got you here, continue to ride them...and perhaps even ride them a bit harder.