(DISCLAIMER: It's not that baffling, I just wanted to use that headline)

The Vincent Lecavalier era on he 2nd line needs to end. It needed to end before it began. Get Michael Raffl back on the 2nd line. Lets get right into it.

The chart above compares the CF% of the mainstays of the 2nd and 4th lines with Raffl, with Vinny and overall.

Wayne Simmonds and Brayden Schenn drive play significantly better with Raffl on their line rather than Vinny. Lecavalier played well with the 4th line late in the regular season, which is shown in the bump up in Adam Hall’s CF% with Vinny rather than with Raffl or even overall. Zac Rinaldo’s doesn’t reflect that as much due to his suspension over the last 4 games of the year. 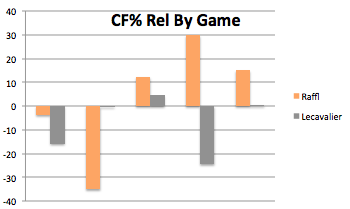 The chart above compares the CF% Rel (CF% Relative to team's CF% with player not on ice) of Raffl and Lecavalier in each game of the series thus far.

Raffl struggled a bit with the lively pace of the NHL playoffs in his first 2 career playoff games which led to his demotion to the 4th line. However, he has been one of the Flyers best players in the past 3 games, including getting some key minutes late in Game 4 on Couturier’s line. On the other hand, the experience of Lecavalier is not showing at 5v5. He finally netted a goal in Game 5 on the power play, but has not been driving possession well. 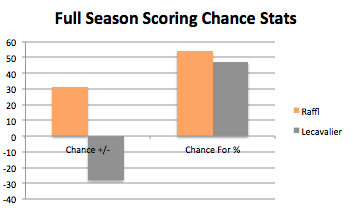 The chart above shows both the full season Scoring Chance +/- as well as Chance For %.

Raffl thrived in the lineup no matter where he was, while Vinny, well, didn't exactly thrive. 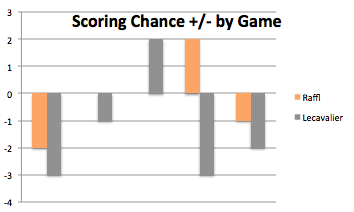 The chart above shows Scoring Chance +/- by game.

Updated to include game 5.

Thanks to Andrew D., we have the scoring chance numbers not only for the full season but for the playoff games as well. Through 5 games, Raffl has been -1 with 6 chances for and 7 chances against. Lecavalier however is -7 chances, allowing 15 scoring chances while being on the ice for 8. 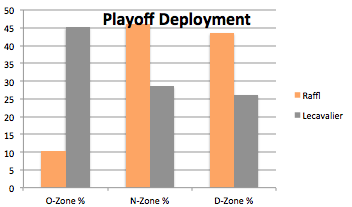 We already saw that Berube’s mind is working with the Schenn/Hartnell flip-flop in the 3rd period of game 5, and I expect (hope) to see a few more changes for next game. Raffl has been quite the pleasant surprise this year and he deserves top-6 minutes. Craig Berube has even said that he'll be a dangerous player some day if he's given top-6 minutes, so why not now?

Here's a piece I did advocating Hartnell on the 2nd line and Raffl on the 1st line. Its about 2 months old, but the numbers are still similar and the main arguments are still there. This is something I would totally be for the Flyers doing for Game 6 and beyond.

Note: Michael Raffl is shown as Flyers' Orange in all the charts. Vincent Lecavalier is shown as Black Hole Black.

All images via i.imgur.com
All stats via extraskater.com and Andrew D.

(Sorry for the seemingly leading Poll Question, but I have to ask).

Who would you put on the 2nd line with Schenn and Simmonds?