Despite the Flyers' seventh ranked power play in the regular season, it seemed to come almost entirely off of the strength of the first unit, while the second unit often struggled. I think it needs to change.

The Flyers rely heavily on their special teams, and it's been no exception in the opening round of the playoffs versus the Rangers.

Even though the second power play unit did manage to score on Sunday, it's clear that Craig Berube wasn't happy with them. He tried Matt Read and Sean Couturier at times after using Vincent Lecavalier, Brayden Schenn, Jason Akeson, Mark Streit and Andrew MacDonald almost exclusively throughout the series.

That's not to absolve the first unit from blame, as they looked particularly inept in Game 5 themselves.

However, that power play goal by Lecavalier resulted in MacDonald's first power play point as a Flyer. That's 19 regular season games and 5 playoff games before finally garnering a point. He averaged 1:34 of power play time in the regular season and 2:03 in the playoffs so far. It's just not working with AMac on that unit.

It's been nearly two weeks since I wrote an article about Andrew MacDonald, so I'm way overdue on my quota.

It's not even MacDonald's fault, necessarily. He's a left-hand shot playing on the left boards while Mark Streit runs the top of the power play (as he should). It's not a position conducive to quick touch passes and one-timers ... the type of thing you see from Giroux who plays that side on the first unit (albeit slightly differently, as he's frequently lower).

Now it's not fair to compare Giroux to MacDonald, but the point remains that it's easier for Giroux to quickly move the puck as a right-hand shot on the left boards. That's not to say a left-hand shot can't effectively play that position, it's just more difficult.

Here's a screen grab of a recent Flyers' power play to give in indication of MacDonald's positioning. 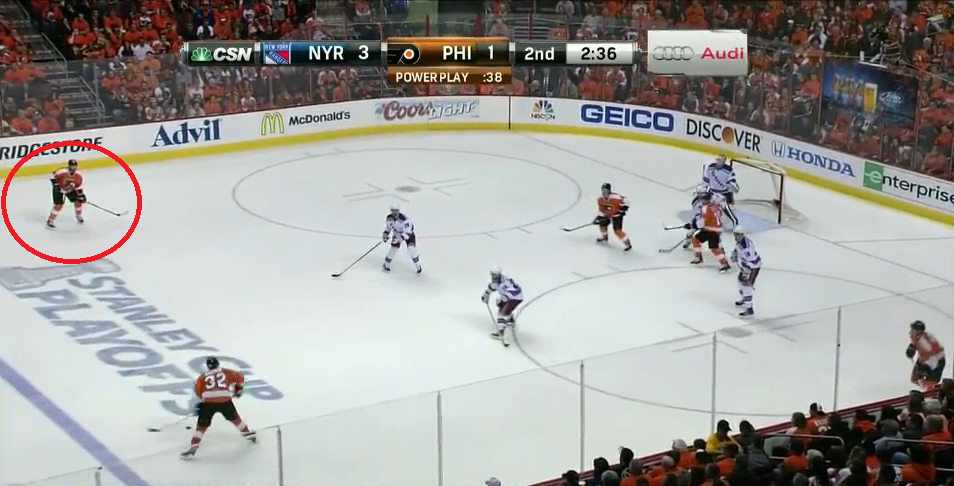 While in New York MacDonald averaged a hefty 3:16 of power play time, only trailing Lubomir Visnovsky among defenseman and he missed quite a bit of time this season. I was curious to see how he was utilized in New York while on the power play so I took to NHL Vault to look at some video. I only quickly looked up a few games but it appears MacDonald was the one running the power play, much like Kimmo Timonen and Streit do for the Flyers. 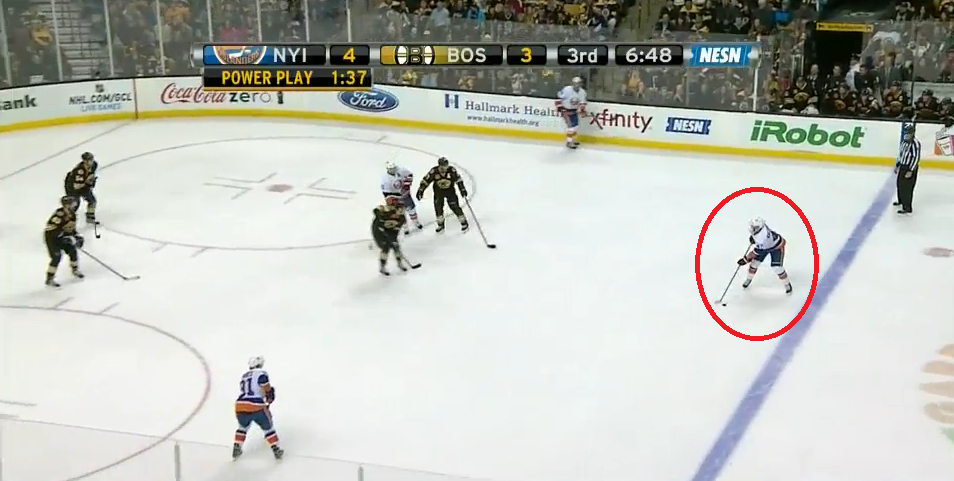 Despite his large number of minutes on the Islanders' power play, I'm not sure it was really working there either. He only had 11 power play points with the Isles. Compare that to Timonen who had 20 while averaging less time-on-ice while up a man. Of course, the Flyers power play is significantly better.

Among all NHL blueliners who played at least 62 games (75% of the games in a season), 105 registered a power play point. MacDonald ranks 17th worst (89th) as far as power play points per 60 minutes.

The second power play unit could use a kick in the pants, and I think it should start with replacing MacDonald with a right handed shot. Considering the only blue liner that qualifies is Luke Schenn, that means you're looking at either Matt Read or Jason Akeson playing that position. I'm not convinced that MacDonald is a particularly effective player on the power play, but he also isn't being put in a position to succeed there.

Unless Berube is totally opposed to having a forward in that spot (and he doesn't appear to be since he uses four forwards on the first unit), I think that would be a logical first step in kick-starting that second unit.