EXCLUSIVE: Rangers fans already throwing in the towel before Game 7

Share All sharing options for: EXCLUSIVE: Rangers fans already throwing in the towel before Game 7

As Flyers fans, we all knew that the Rangers stand no chance in tonight’s Game 7 matchup. It appears that Rangers fans feel the same way.

It all started this morning when yours truly took a peek over at the Rangers’ SB Nation blog, Blueshirt Banter. The entire site was filled with content about how awful their team’s are at advancing in the playoffs.

Seriously, take a look at this screenshot I grabbed of their front page. Click to see a bigger version. 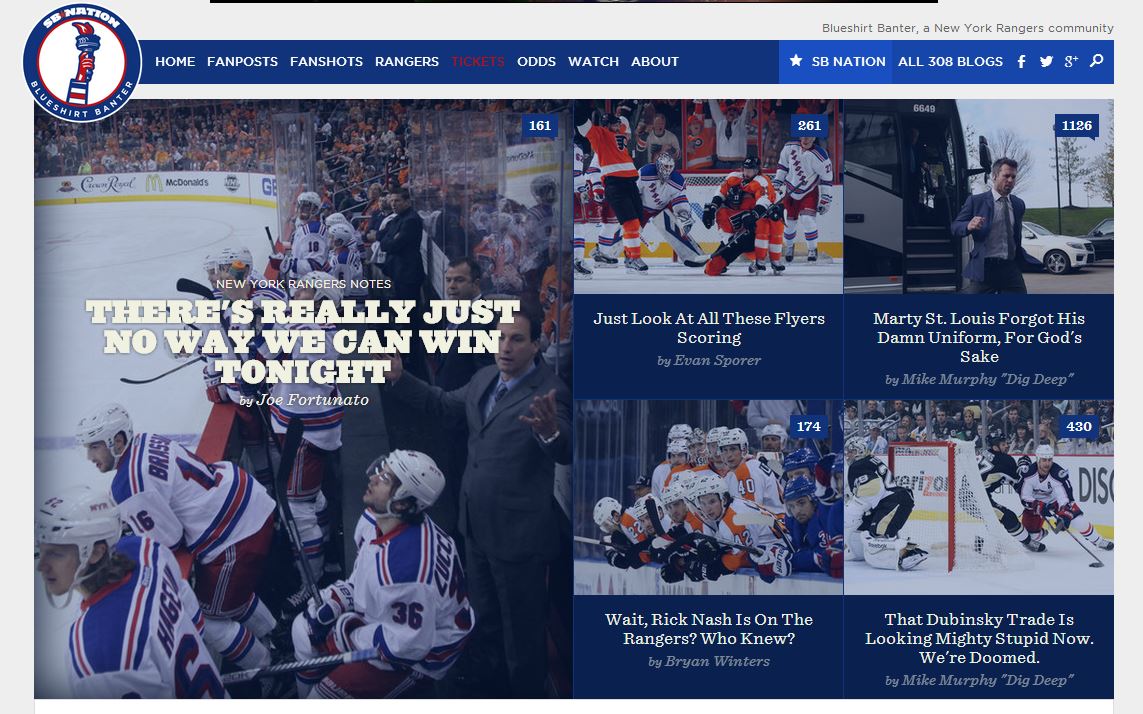 To be honest, Blueshirt Banter’s pessimism makes a lot of sense. Wayne Simmonds just derailed their beloved team not 24 hours ago, forcing the Rangers to leave Philadelphia in shame. Couple that with the fact that their team has the ugliest freaking goaltender we’ve ever seen, and there’s not a lot to be happy about going into Game 7.

Because I’m a Trusted Reporter™, I took a quick Amtrak up to New York City to get a better sense of the environment. After nearly vomiting a few times from the stench in the air, a few locals shared their thoughts with me.

Tom from Brooklyn immediately expressed his doubts about a Rangers victory, claiming they "stink more than a garbage barge floating down the Hudson." Samantha of the Lower East Side said they were a lot like New York Pizza, "you know, one of those things that people talk about being so great but when it comes down to it, it’s just pretty standard pizza that you can get anywhere."

I tried to get additional comments from other New York natives, but they simply wouldn’t pause from their brisk pace toward Penn Station. I naturally assumed they were trying to get out of the horrible city, and wanting to leave the hellhole that is New York myself, I had no intention of stopping them.

Regardless, the atmosphere was pretty clear – Rangers fans not only think that they stand no chance tonight, but also probably want to trade the entire team and burn Madison Square Garden to the ground.

Considering the Rangers are terrible and the fact that MSG is indistinguishable from a dumpster, that makes a lot of sense.

Flyers vs. Rangers, Game 7: Complete coverage of the Eastern Conference First Round