Flyers vs. Bruins recap: And the Flyers waste a Rosehill goal...

HOW CAN THEY DO THAT?

Share All sharing options for: Flyers vs. Bruins recap: And the Flyers waste a Rosehill goal...

As the 2013-2014 season comes to a close, each game in the month of April seems to evoke rash, often unnecesary responses from both ends of the 'Where does the team sit?' spectrum: A two game losing streak? We're doomed! A three game winning streak? We're elite!

The Flyers ended their dreaded "12 game gauntlet" this afternoon at 6-4-2, for 14 points. Considering their opposition, that's the showing of a good, if not pretty good, team. This loss does not mean the Flyers are now on the outside looking in (far from it, actually.) None of the Flyers losses in the past week should evoke a state of hysteria. The roof is not caving in. The Flyers are still third in the Metropolitan Division. Let's all settle down.

There are many things to process from today's game at the Garden, so let's start with the most basic ones: Boston is a great team. The Flyers are a decent one. Got it? Okay, let's move on.

With about three and a half minutes to go in the second period, and the Flyers down 2-1, JAY ROSEHILL SCORED! -- and, oh my, what a beauty it was. But, come on, Flyers! How the heck can you waste a Jay Rosehill goal? That's inconceivable. (This does not mean, if you're a Jay Rosehill supporter, you get to say "I told you so!" to every single fan who questioned his inclusion into the lineup. Hockey's a hilarious weird game. Things like this happen all of the time.)

If someone asks you for a quick recap of today's game, just say Jay Rosehill scored. That's all you need to say.

*Ray Emery, man. Forget the final five minutes - Ray Emery was a big, big reason why this game was so close that late into the third period. He's looked incredible in his starts since the Olympic Break, and I had no problem with Chief giving him the start this afternoon. Coming into today, Ray Emery's 5-on-5 save percentage in road starts: .916. Steve Mason's? .914. Mason's pretty much a lock to go tomorrow night, a game that's now a must-win (solely due to the opposition.) That works.

*Wayne Simmonds scored his 14th power play goal this afternoon; he's now third in the NHL in power play goals this season. On another note: a power play goal! The Flyers went 1-for-3 with the advantage this afternoon, but only seemed to look cohesive on their last opportunity. The puck was in the offensive zone for almost 1:30, and the Flyers even executed a pseudo-line change. Take another look at the unit that scored that goal. MacDonald and Streit on the point AND Giroux playing the wall. It looked... weird, but it got the job done.

*Jay Rosehill scored! I needed to mention that again.

*Unfortunately, the door really came unhinged at the start of the third period. Check out this shot attempt chart, courtesy of Extra Skater: 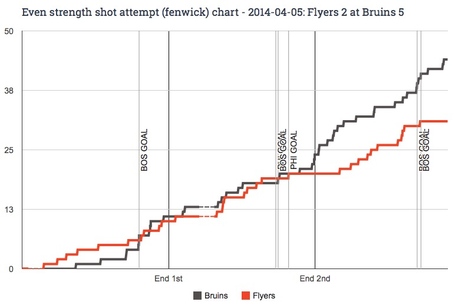 Woah. That's, uh, not good. It took the Flyers about five minutes to get going, which, against a team like Boston -- who boasts the best third period differential by an incredible margin -- isn't a recipe for success.

But let's step off of the ledge, everybody. Boston's, unanimously, the best team in the Eastern Conference. The Flyers head home to face the Sabres at the Wells Fargo Center tomorrow night. The team kiiiiind of needs to get two points. If not, then it's time to talk. Go Flyers.