In his first (and likely last) full season with the Flyers, Adam Hall showed he could be a pretty reliable fourth-line center moving forward, and he was a big part of one of the league's more elite penalty kill units. But do the Flyers have enough space on the roster to fit him in this coming season?

(Numbers in parentheses indicate descending rank among regular Flyers players at his position, i.e. one of the team's top eight defensemen or top 13 forwards.)

Travis used this headline for Wayne Simmonds' Year In Review yesterday, but it also works so well for Adam Hall, so I'm totally using it again.

Flyers management and coaching staff had obviously seen enough in Hall to want to give him a full year of centering the fourth line. All of us here at BSH knew the type of player and skill-set the Flyers were going to get. From our preview back in September 2013:

With Hall, you pretty much know what you're getting. He basically personifies the "low-risk, medium-reward" type of player, if that's a type of player that actually exists. Most of his seasons look pretty similar to the way it did last year -- high percentages of defensive zone starts, faceoff wins, and a few minutes per game of penalty time. He's got a clearly well-defined role, and it's one he's decent at.

'A high percentage of defensive zone starts' was an understatement. Hall was absolutely buried in the 80 games he played in this season. Seriously, take a look (via Extra Skater): 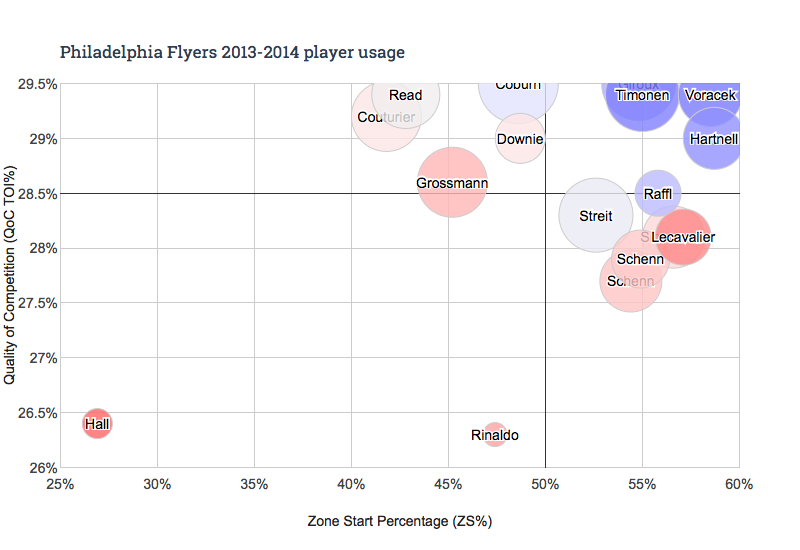 Hall finished the season averaging 9:50 TOI per game, which is pretty much what you want out of your fourth-line center. He was a staple on the Flyers' incredibly efficient penalty kill (I'll get to that in a bit), and he was one of the few Flyers forwards not named Matt Read, Claude Giroux, or Sean Couturier who could hold his own defensively at 5-on-5 play.

Hall's the type of player that's not going to look that good in the realm of advanced statistics. Relatively speaking, the Flyers' fourth line wasn't exactly that strong, but general consensus is that Hall wasn't the cause of this weakness.

The value was there -- obviously, it's $600K -- and Hall performed admirably (read: not a liability) saddled with less-than-optimal linemates (save Raffl) and increased penalty kill responsibilities.

So the Flyers have to re-sign him, right?

If the Flyers can get another year of Adam Hall for $600K, we'd all be ecstatic.

Unfortunately, it's not that simple. At this point, the Flyers' logjam at center is pretty well documented. There's the possibility that the Flyers carry all of Giroux, Schenn, Lecavalier, Couturier and Laughton on their opening night roster.

Schenn may be converted back to a winger. He may play center between Simmonds and Hartnell. Lecavalier may find himself back on that second line, or he could be slotted in as a fourth-line winger. Laughton has a decent chance to make the team out of camp this season. There's a 99% chance they'll keep him at center. And on and on and on.

Jesus, Flyers. Get it together.

Laughton's emergence leads me to believe that he's most likely to succeed Hall as the team's fourth line center this coming season.

Is it a sure thing? I don't think so. But the fact of the matter is that Hall, at 33 years old, is semi-expendable. He received a one-year extension last season, so obviously the team wasn't dead-set on having him in future plans. It's the nature of the beast sometimes.

Let's check back on our season preview for Adam Hall and see what we thought could happen with him this year:

Hall anchors a solid fourth line, wins a ton of faceoffs both at evens and on the penalty kill, and does OK in possession despite a large number of defensive zone starts.

Too many defensive zone starts overwhelms him and he doesn't look good at all, and he and Max Talbot and Zac Rinaldo form a completely uninspiring fourth line. Or some rookie beats him to a forward spot and he ends up getting waived again like he did so many times last year.

It looks to me like Adam Hall's play was pretty damn close to what we thought would be the best case scenario for his 2013-2014 season. The fourth-line wasn't trusted with tons of minutes down the stretch -- for good reason (Rinaldo, Rosehill, Lecavalier, other junk) -- but Hall was the exception. There were a few times this season Hall was called upon late in close situations to be a part of a Giroux - Hall - Couturier pseudo-defensive/shutdown line.

That doesn't happen unless Craig Berube has complete confidence in Hall's ability in said role.

All-in-all, it's hard to look at Adam Hall's tenure and contract with the Flyers and be disappointed. Desperate to fit in and be part of a potential contending playoff team (or any team, really), Hall took a cheap contract and worked his way back to a full-time NHLer.

He became synonymous with sound 5-on-5 defensive-zone play (on a team inherently lacking in this department) and any situation in which a face-off win was necessary. He was also a key contributor on one the league's more elite penalty kill units. If you measure a penalty kill's effectiveness using shot suppression, the Flyers were by and far the best team in the league in that regard.

Let's not forget he was saddled with two of Rinaldo, Rosehill, or Lecavalier pretty much the entire season. That's a feat in its own right.

Obviously, as a UFA, the Flyers can re-sign him if they wish. Do we see it happening? Not really.

And, that's a shame -- because the Flyers would stand to benefit from the re-signing of a player of Hall's capability and skill-set. After bouncing around on waivers for quite some time, Hall finally found himself a niche within an organization desperate for his services. But due to said organization's inability to appropriately assess future depth, Hall's most likely going to spend his summer looking for a new team. Perhaps he'll find one who can appropriately fit him into future plans. He deserves it.

Feel free to vote in the poll below to grade Adam Hall's season on a scale from 1 to 10. Vote based on your expectations for him coming into the season -- i.e. 1 being "he was incredibly disappointing and I want him out now", 10 being "he was outstanding even beyond my craziest expectations".