We apologize, but Claude Giroux is not winning the Hart Trophy

The Flyers official website is making us write something even remotely negative about Claude Giroux. Damn you.

Share All sharing options for: We apologize, but Claude Giroux is not winning the Hart Trophy

Claude Giroux is my favorite hockey player on earth. He's dazzling to watch, always has the potential to make you drop your jaw, plays physical, and wears orange and black. He is wonderful, and I think he has a Hart Trophy and hopefully a Stanley Cup in his future.

But he's not winning the Hart Trophy in 2014, man. It is Sidney Crosby's trophy -- he had 17 more points than Ryan Getzlaf and 18 more than Giroux in two fewer games -- and if you think otherwise you are a very silly person with very, very orange glasses on your face.

Why does Claude Giroux deserve to take home the Hart Trophy at tonight's #NHLAwards? Jay Greenberg counts the ways: http://t.co/nrNDJtRIdb

I know, I know -- It's the Flyers official website, and they have to cheerlead for their guy. But two things:

But alright, fine. We'll play the game. Let's go click into the stor--- OH YOU MEAN THIS IS A FUCKIN SIX PAGE SLIDE SHOW TOO? Jesus, whatever guys. We'll give you six pageviews. You win.

1. The first reason is that "He Called It." Yes, they're talking about his declaration in late October that the Flyers would "take it game by game and we will make the playoffs." They were six points out of a playoff spot, and they had like a billion hockey games to play. I know we make this quote a big deal and everything, but it was really just Giroux saying "hey we're not worrying because that's stupid and I think we'll make the playoffs because it's October and I'd be an idiot to say otherwise."

2. "Examine the hump games that brought the Flyers back from records of 1-7 and 4-10-1. Giroux produced in almost all of the pivotal contests, starting with his first goal on Nov. 9 against Edmonton, which, after consecutive wins followed, proved to be the turnaround." ... alternative blurb: "team's best player goes on hot streak, team wins hockey games"

3. They talk about the Flyers' ability to rebound from tough losses with solid wins the next game. Cool! What's that have to do with Giroux? I mean, he's on the team -- so there's that. But this is a reason why he should win the Hart Trophy? Because his team was good in games after they lost and sometimes in those wins he scored goals? Talk about grasping at straws, guys.

4. Number four is basically the same thing: "From that point on, the Flyers went 16-8-4 against a schedule laden with the league’s best teams, with Giroux scoring in practically all their noteworthy victories." Is it really shocking that a guy who scores more than a point per game scored in basically every game they won? And how does this pick Giroux apart from Sidney Crosby or Ryan Getzlaf? Are all five of these points the same?

5. Just gonna leave the screen shot of this one here. Also notice the quote from Hextall. WHAT DOES THAT EVEN MEAN YOU'RE NOT ACTUALLY SAYING ANYTHING? 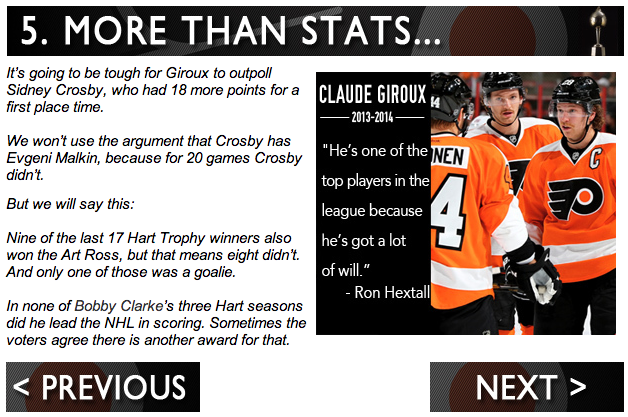 Sigh. Giroux is a very, very legitimate top-3 candidate for the Hart. Maybe even second-place. But nobody in their right mind thinks that he actually deserves it over Crosby this season. Reminder: Crosby scored 104 points this year! He's really, really good! BUT GIROUXS GOT A LOT OF WILL SO I GUESS HE DESERVES IT. smdh