The Flyers blueline needed some help in 2013-14, and the powers that be decided Andrew MacDonald was that help. Unfortunately, he wasn't exactly helpful.

(Numbers in parentheses indicate descending rank among regular Flyers players at his position, i.e. one of the team's top eight defensemen or top 13 forwards.)

A trade many dreaded

The 2013-2014 season was not a particular kind one for Flyers blueliners.

Kimmo Timonen was still probably the Flyers best defenseman, but was a year older. Braydon Coburn had a bounce back year; but beyond those two, things got murky. Nicklas Grossmann had perhaps his worst season as a pro, including an absolutely brutal month. Mark Streit was signed to a hefty contract and started off quite poorly, although he really turned it around after the Olympic break. Luke Schenn's promising first season in orange and black was nothing but a mirage. Andrej Meszaros was pretty brutal and couldn't even crack the lineup for most of the season; he was eventuially traded. Erik Gustafsson was a source of optimism but he unfortunately could never show the consistency needed to stick in the lineup. It was no surprise that the Flyers were looking to add a defenseman as they approached the trade deadline.

There were quite a few options available at the deadline, but the one player most of us here at Broad Street Hockey did not want was Andrew MacDonald. Naturally, he was the one the Flyers acquired.

You could at least attempt to make an optimistic case for MacDonald as a player. He played on a very poor Islanders team as their de facto #1 defenseman. He played exceptionally tough minutes (always starting in his own zone and against very difficult competition) and he played a lot of them. With the Flyers, he wouldn't be asked to do that on our third pairing.

Unfortunately, the optimism was a farce. He played less minutes. He played against easier competition. And he started in the offensive zone much, much more. Yet...he still struggled mightily at driving play towards the opponent's end of the rink. MacDonald had the worse relative shot differential among all Flyers defenseman. He almost seemed to be constantly defending.

But it was interesting because I had made it a point to closely watch MacDonald play defense and...well, he didn't look that bad. He's a good skater, he can pass. He seemed to have adequate positioning, and he is a very dedicated "man" defender, which is something I feel the Flyers defenseman often lapse on. So what gives?

Well, he really did seem to be constantly defending. Eric Tulsky's work revealed MacDonald has some pretty appalling play in the neutral zone which results in him always having to play defense.

From a defenseman's perspective, it's pretty simple. If you breakup the rush before it comes into your zone, that's ideal. It's hard to generate a shot or a scoring chance if you can't get in the offensive zone. If you force your opponent to dump it in deep, they now have to go get it back, which may or may not happen. The worst case scenario is allowing them to carry the puck into the zone where they are free to take a shot.

What Eric found was that MacDonald was the worst on the team in all three areas among the regulars. He was targeted the most at 47.6%, he allowed carry-ins the most often at 78.1%, and he broke up the fewest rushes at 4.7%.

For me, my immediate dislike of the MacDonald trade was less about him as a player, and more to do with the fact that he had already turned down a four year $16 million offer from the Islanders. When I looked at contract comparables, I settled on an estimated contract of $4.25 million per season. I just didn't, and still don't, see the value on spending that much on a player that looks like a third pairing guy.

Well, it appears my estimate was way off because MacDonald ended up signing a six year extension for $5 million per season.

Whether you like what you've seen from MacDonald or not, he now has a similar contract to guys like Paul Martin, Alex Edler, Keith Yandle, Niklas Kronwall, Jay Bouwmeester, James Wisniewski or a number of other guys who are better hockey players than him.

Many are saying that this was his market value and that somebody would have paid him this as a UFA this summer, so the Flyers had to do it to keep him. Sure, I guess. They also have the choice to not overpay just because another team might be dumb. 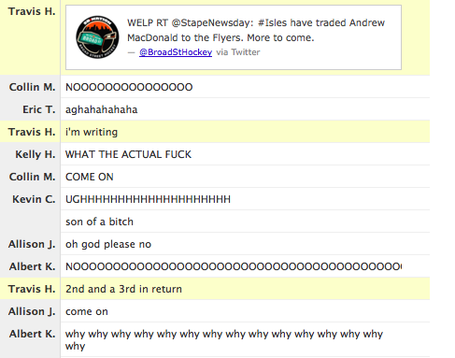 Charlie O'Connor laid out the potential positives of the deal, which had some more concrete expectations. That probably skewed more towards being optimistic than realistic, but it's the best we can do as far as our expectations of him go.

In Philadelphia, MacDonald will have a chance to make the case that high quality competition and heavy minutes helped cause his poor numbers, as he won't be leaned upon nearly as much here as he was in New York.

MacDonald will almost definitely slot in behind Braydon Coburn & Mark Streit in terms of 5v5 ice time, and possibly Nicklas Grossmann. Kimmo Timonen, considering his minutes on the power play and on the penalty kill, will likely beat him in overall time on ice per game as well.

MacDonald could be paired with his former teammate Streit on the second pairing at even strength, or even could be used on the third pairing if the Flyers continue to keep Grossmann with Streit.

Regardless, MacDonald will not be a top pair defenseman in Philadelphia, at least not this season. The optimist's take would be that weaker competition plus less minutes should equal a better-rested, more efficient Andrew MacDonald.

If we're comparing to Charlie's optimistic expectations, it was hit or miss. He wasn't leaned on as heavily here, and was ultimately used on the third pairing. However, despite his overall minutes being down from on the Island, MacDonald ended up playing the most five-on-five minutes of all Flyers defenseman after he was acquired

It's really tough to call this one anything other than a loss; and unfortunately, this looks like one that is going to sting for a while because of the six year extension.

He wasn't good in New York. He wasn't good when he got here. He wasn't deserving of that contract extension. Now the Flyers continue to have a silly amount of money committed to their defenseman, and it may not even include Timonen. It appears as if MacDonald is going to have play a bigger role next season, and I'm just not convinced he's capable of turning it around.

I really hate to come off overly harsh or critical, but MacDonald continues to get drastically outshot every time he is on the ice. He has talent. As I mentioned previously, I do think he is good in his own zone. I'd just rather he wasn't always in it.

Dave Tippet had some great comments in the past about defenseman, and it fits MacDonald like a glove.

We had a player that was supposed to be a great, shut-down defenseman. He was supposedly the be-all, end-all of defensemen. But when you did a 10-game analysis of him, you found out he was defending all the time because he can't move the puck.

Then we had another guy, who supposedly couldn't defend a lick. Well, he was defending only 20 percent of the time because he's making good plays out of our end. He may not be the strongest defender, but he's only doing it 20 percent of the time. So the equation works out better the other way. I ended up trading the other defenseman.

That's what you have with Andrew MacDonald. The puck-moving isn't the issue with him but it appears the neutral zone play may be. The end result is that he's constantly defending; and that's no good.

Feel free to vote in the poll below to grade Andrew MacDonald's season on a scale from 1 to 10. Vote based on your expectations for him coming into the season -- i.e. 1 being "he was incredibly disappointing and I want him out now", 10 being "he was outstanding even beyond my craziest expectations".