A conversation with Ron Hextall, Part 1: How the Flyers are shaping up on defense

In Part 1 of an exclusive three-part interview with Ron Hextall, the Flyers general manager focused on the defense. He talked with BSH about Kimmo Timonen's health, the team's young defensive prospects, Andrew MacDonald's contract and more.

Share All sharing options for: A conversation with Ron Hextall, Part 1: How the Flyers are shaping up on defense

BSH: First off, any update on Kimmo Timonen?

Ron Hextall: We don't. He's supposed to come into town today [Tuesday, August 26], though, so we'll have something in the next little while here. He's gonna see our doctors and once we get through that we'll have something. As far as I know, Kimmo's doing well. Status is the same as it was before and things are well.

Aside from Kimmo, his news and the Umberger-Hartnell trade were the biggest talking points with the Flyers this offseason. So it was a quiet offseason, and Flyers fans aren't really familiar with that, especially in recent years when things have gotten a little crazy.

It seems like a lot of fans are nervous that by largely standing pat, that the team didn't really keep up with the rest of the division or the conference. What would you say to assuage those fears?

Our feeling here is that we've got a good team. We lost to the Rangers by a goal and they went to the Final, so I think we're right there with a pack of teams that's a pretty good group. We like our team and we're not going to mortgage our future to make a minimal gain this year.

Again, we're not gonna mortgage what we have coming to make a minimal gain this year.

You've been pretty consistent in saying that you're not gonna rush the young defensive prospects, and young players in general but you've made a point about guys like Shayne Gostisbehere, Sam Morin, Robert Hagg, Travis Sanheim. These young guys in the system. But what are you looking for exactly in terms of their NHL-readiness? How do you know when they are NHL ready?

When we feel they're ready, it's truly a feel. You need to look at the full package -- what they did the year before, what level they've been playing at, can they make improvements at that level, where is a player best suited to play? There's a lot that goes into these decisions and they're hard, make no mistake.

But I've said this over and over: tell me one player that's been hurt by being sent back to junior, being trained the right way, playing in the American League. Then you look at the players who have been hurt by playing in the National Hockey League too early. The list is long. 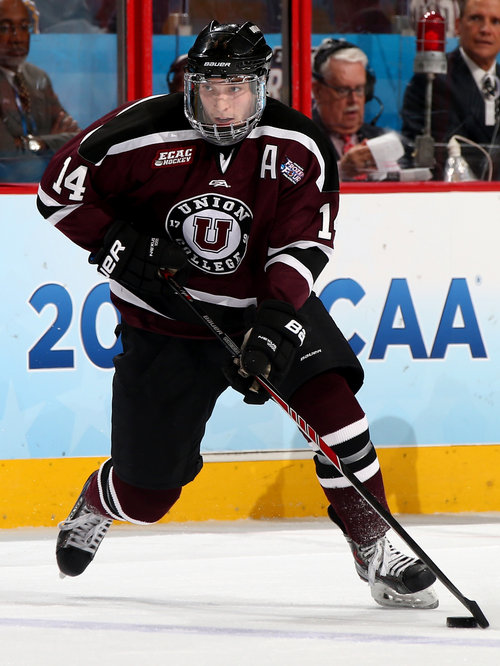 Shayne Gostisbehere will make the jump to the AHL this year. (Getty)

There's a history telling us all that rushing young players is not a good thing and that's a philosophical thing that I've learned through the years from my playing career right up until now. That's the way I approach things.

For one of those young kids to make our team, they're gonna have to come in and beat someone out. There are certain kids that if they played in the American League last year and played at a real high level, you can maybe expect that hey, maybe this kid can make our team. That's not the case with our guys. We didn't have that guy in the American League that played at a high level that we feel is knocking on the door.

So these kids are gonna have to come in and beat someone out, and that's not an easy task in a couple weeks.

Let's use a kid like Gostisbehere as an example because he played college, and the hype around him is higher than with the other prospects because he's been in the organization a little bit longer, won the Frozen Four and the MVP in Philly and all that.

But the college kids, they only play what, 42 games in a season is the most Gostisbehere's ever played? How much does that factor into a player's development -- the fact that they've never played a full 82+ playoffs at the pro level.

There's no question it factors in but you could say the same for a junior player, not quite to the degree because they play more games, 72 games. But they still don't play against the big, strong, fast players every night, so it's a huge jump for a college player, a junior player. It's

Sometimes it's no different than with our kids. We let them crawl before they walk. I think sometimes with hockey players, the hockey world wants them to walk before they crawl, and I would much rather err on the side of caution and let a player develop at what we consider the proper rate rather than rush them.

Back to the defense this coming year. Not to assume that you won't have Kimmo, but you sign Michael Del Zotto in part to replace Kimmo in the event that he's not around. So if you do have to replace Kimmo to start to the season or if he's not around at all this season, it seems like it's gonna be a replacement-by-committee situation. Would you agree with that and how do you see it all playing out?

Without a doubt I feel it is by committee. I like our group. Probably every defenseman on our team now is gonna get a couple minutes more a game. We don't expect Andrew MacDonald or Michael Del Zotto or Mark Streit to swallow Kimmo's minutes and situations. It's more as a group and I like our group. I really do.

I've said this time and time again, maybe we don't have that top guy that 10 or 12 teams have but you know, one through seven I like our group. They're all good players. We have enough puck moving and defending in our group. I like our group and I feel like as a group of seven we should be a real solid defense.

You mention Andrew MacDonald. You weren't the general manager at the time of that trade, of that signing, but a lot of people peg him as a guy who really needs to step up this year given his contract, given that Kimmo is probably out for at least a little bit.

When that move was made, and I know you weren't GM but you were in the front office, what was your input on that move and your opinion on signing MacDonald to that hefty contract?

We all like Andrew. He's a good player. He can play all situations and he's a smart player. Can he play better than he played for us last year? Yeah, he can. He played better at times on the Island. Sometimes you gotta watch his minutes because he's not a big guy, but he's a good player.

Check out Part 2 of our interview with Ron Hextall, in which he discussed the forwards, including who he sees stepping into the hole left by the departure of Scott Hartnell, and what he's looking for out of Steve Mason this year.

In Part 3 on Thursday, Hextall will discuss the outlook for the Lehigh Valley Phantoms, his relationship with Chris Chelios, what it's like signing his own kid, and the Flyers use of analytics going forward.

A conversation with Ron Hextall: Read our full interview with the Flyers GM