From big questions on defense, to the offensive production of young forwards, to .... yes, goaltending, here are three big questions facing the Flyers as they enter 2014-15.

This job is going to come by committee, as general manager Ron Hextall told us in an August interview.

"Without a doubt I feel it is by committee," Hextall said. "I like our group. Probably every defenseman on our team now is gonna get a couple minutes more a game. We don't expect Andrew MacDonald or Michael Del Zotto or Mark Streit to swallow Kimmo's minutes and situations."

So, OK. From that perspective the Flyers can hope to manage Kimmo's minutes. On the power play he'll likely be replaced by Mark Streit, and that shouldn't be too much of an issue. Streit has a huge cannon of a shot and can certainly fill in for Kimmo in helping quarterback that top power play unit. 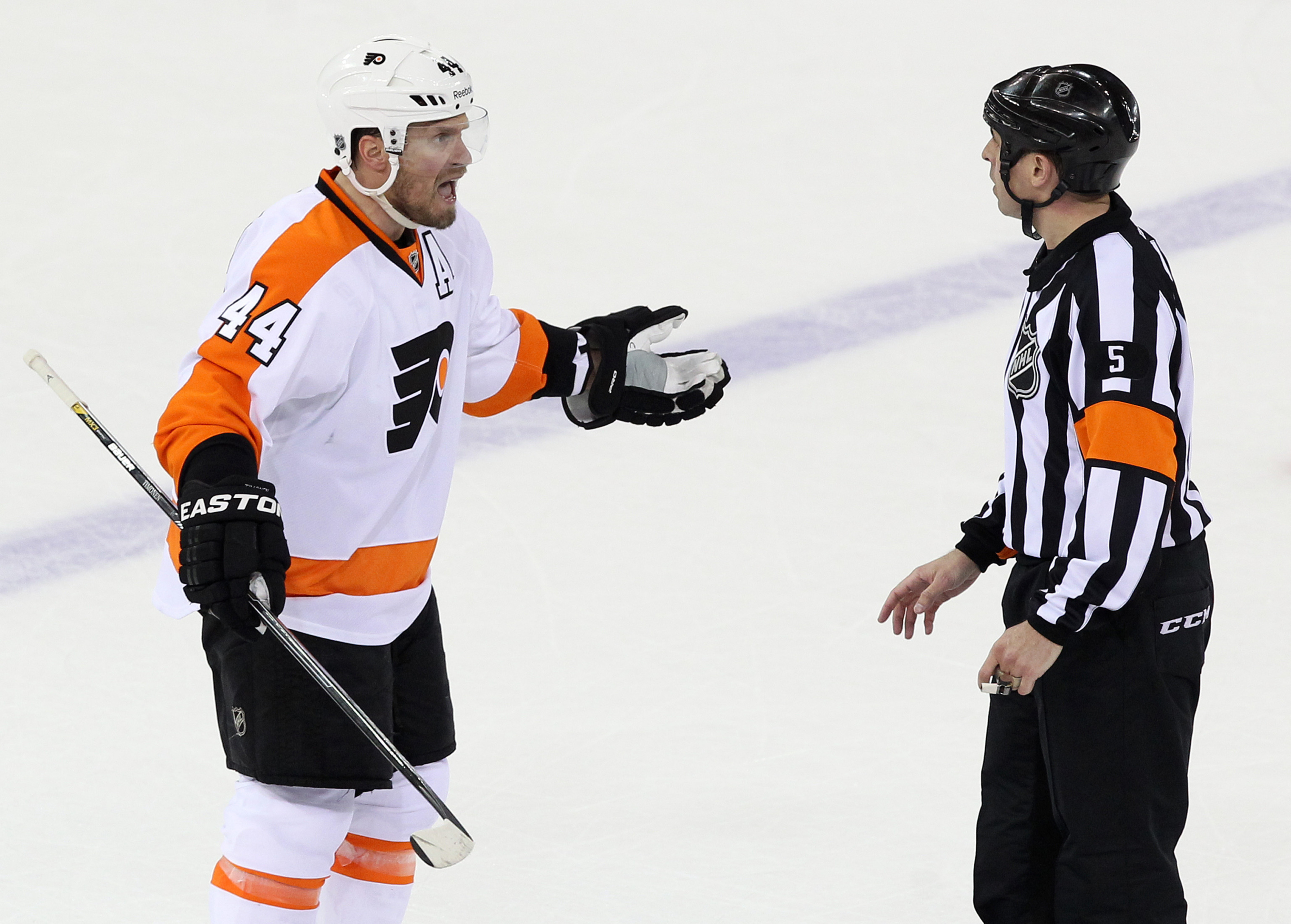 But it's at even strength where we find issues. Simply put, Braydon Coburn can't play much more hockey than he already is -- and maybe that's why Hextall didn't mention him by name when we asked it. He averaged 22 minutes per game last season, with four of those minutes per game coming in tough penalty kill situations. If you can pull him back off the penalty kill then perhaps he can step up and fill in more at evens, but that's not going to happen. The Flyers have an elite penalty kill and it would be silly to change a thing there.

MacDonald is the guy who's going to be largely responsible for playing Kimmo's role at evens, and that's just not a great look for the Flyers.

We know from watching a good bit of games with him in Philadelphia last season that his biggest struggle is the neutral zone. In a nutshell, he gives up way too much ice in the neutral zone and the opposition targets his side of the ice through the neutral zone a whole bunch as a result. Our Kevin Christmann did some great analysis of this last season.

The hope is that MacDonald can be trained out of that, but he's a 28 year old hockey player. It might not be teachable at this point. If it's something that can't be trained out of him, he'll become the weak link on that top pairing, and he'll give the highly-skilled opposition that he'll face as Kimmo's surrogate an easy, routine entry into the Flyers defensive zone. That's not going to help replace No. 44 at all.

Let's say yes and no. 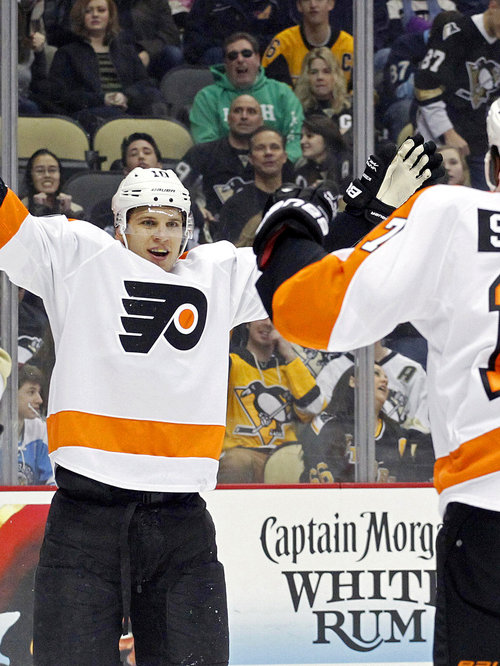 In Schenn's case, it seems like a given at this point that he will indeed step up offensively. That's what happens when you get a promotion to the top line, especially when you played on a second line last season that got crushed at even strength. Schenn -- at least from the start of the new season -- will be put in a much easier opportunity to succeed as an offensive player, and the look from him in training camp this far as been fantastic. Add in the potential of more power play time and those opportunities for offensive growth seem even greater.

We're also hoping that, simply put, some form of consistency will help Schenn find his footing. He's been shuttled around between wing and center so many times in his Philadelphia career that his head must be spinning, and he'll finally, hopefully have a chance to play on a successful line with top-caliber offensive players, and do it in one position. That's huge for Schenn.

We're hoping to see Schenn finally break out offensively and get the monkey that's been lingering on his back for three years now finally off. Couturier might be a different story. Yes, Hextall and Berube have said often that they wish for him to break out offensively, and early training camp looks have Wayne Simmonds on the line with Matt Read and Couturier. That will help. But ultimately, we're not sure if this one season will be the big offensive breakout everybody is looking for.

Will he score more points this year than he has in the past? The opportunity is certainly there. Will he be a 20 goal scorer, as some people seem to think he should be? That's probably not going to happen. I personally see Couturier growing as an offensive player on a slow, gradual trajectory. He has the skill to do it, but it's not suddenly going to click for him one season. It's going to take time.

The real answer here is that we truly do not know. It's impossible to know. That's why it's such a big question.

But if we're acting like deadbeat gamblers in what's left of Atlantic City, the answer we have to go with is no. And that's not even necessarily a knock on Mason.

Sure, we can look right at the numbers and see the obvious truth: that despite his solid career thus far in and orange uniform, Mason has been an awful NHL goaltender. We've talked about that to death and there is no reason to continue it, especially because we don't want to be pessimistic before the season even begins. 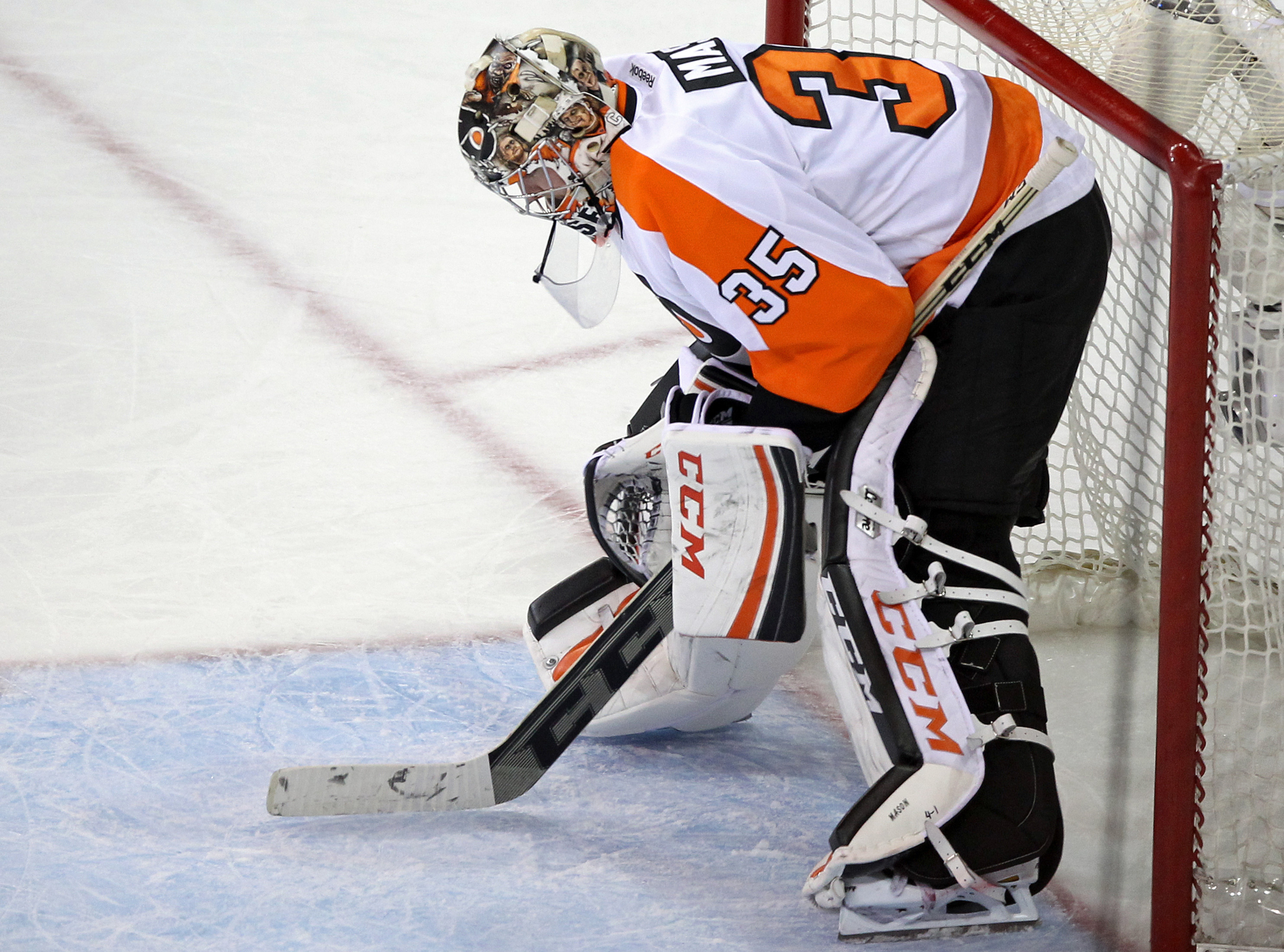 But beyond his track record, it's not really even up to Mason. Take it back to question No. 1: can the Flyers replace Kimmo Timonen? Their defense has gotten substantially worse with the departure of Timonen, and unless one of the young kids is able to step in from beyond their expected AHL role and put together a breakout rookie NHL season as a top four defenseman, we can't really see any in which this defense gets better.

Maybe Andrew MacDonald isn't a possession tire fire, or at the very least, maybe he can be propped up by Braydon Coburn. Maybe Michael Del Zotto rejuvenates his career and finds some level of success with Luke Schenn. Hopefully Nicklas Grossmann and Mark Streit are able to carry over their fantastic post-Olympic play from last season. All in all though, the best case scenario is that the Flyers defense is about even with what they were a year ago.

We're talking about a defense that's likely worse than it was in 2013-14 -- if not marginally than substantially -- and a goaltender who will face a lot more pucks as a result. We want Mason to become a great goaltender in Philadelphia and truly hope he's turned the page in his career now that he's here, but it's going to be tough to grow behind this defense.