Share All sharing options for: Ron Hextall is the most exciting thing about Philadelphia sports right now

Believe it or not, the last major professional Philadelphia sports team to play in a playoff game was the Philadelphia Flyers, back on April 30, 2014. It was a Game 7 loss to the New York Rangers, and it was 523 days ago.

Since then, the Philadelphia Phillies have lost 175 games, won 123 games and have obviously not come close to the playoffs. (They did avoid losing 100 games in a season in the finale on Sunday, and they'll get the No. 1 overall pick in the MLB Draft. So that's good, I guess.) They finally fired their abysmal general manager, and they're starting to replenish their farm system. But even if things go extremely well, they're years away from getting 40,000 people inside Citizens Bank Park again.

The Philadelphia 76ers have won just 18 games since April 30, 2014. They've lost 64 in that same time span. They haven't sniffed the playoffs, and despite finishing at or near the bottom of the NBA in back-to-back seasons, they haven't won the NBA Draft Lottery, ending up with the No. 3 overall pick in back-to-back years. The guy they took with that pick in 2014 can't get healthy, and even though they do have a big long-term plan, the best-case scenario is contention by 2018.

The Philadelphia Eagles? Well, who the hell knows? People were talking Super Bowl about this team before this current season. Four weeks later, we're all giving up on a team that's in the basement of a bad division, unable to get out of its own way. It's impossible to know what the future holds -- and you could make a legitimate argument that they could be the Philadelphia team that's furthest from a title, assuming the team we've seen the last four weeks is what they really are.

And that leaves us with the Philadelphia Flyers.

Look, I don't think the Flyers are a playoff team in 2015-16. I think that for the second straight calendar year (the first one being the one you're living in right now) this city will be playoff-less.

In an old world where you just needed to be one of the eight-best teams in the East, maybe the '15-16 Flyers could string some luck together and sneak into the postseason. But in the new world, where you need to be one of the top five teams in your division -- and even that isn't good enough to guarantee a playoff spot -- I just don't see it happening. Washington, Pittsburgh and both New York teams were all playoff teams a year ago and they've all gotten better this summer. The Columbus Blue Jackets probably would have been a playoff team a year ago if not for an absurd number of man games lost to injury, and they've gotten better this offseason.

That's five teams head-and-shoulders above the Flyers in their own division, which makes the playoffs literally unreachable. And even if I'm wrong about one or two of those teams, or they fall apart through injuries or whatever else, finishing in fourth in the Metropolitan still wouldn't guarantee the Flyers a spot in the playoffs.

So that's three paragraphs of doom-and-gloom about the upcoming Flyers 2015-16 season, but I'm saying it to make an overall point: Ron Hextall and this Flyers organization are the most exciting thing in Philadelphia sports right now. And I think the fact that they're not on a playoff track this year is exactly one of the reasons why he's so exciting as a general manager. Hear me out.

Think about Hextall's tenure for a second. Since taking over the team in May 2014, how moves has he made that were universally hated? The R.J. Umberger for Scott Hartnell trade is the big one -- and even with that trade, we could still see why he was doing it, because of the long-term salary implications it brought. There was the contract extension for Zac Rinaldo, too ... but we'll get to that. 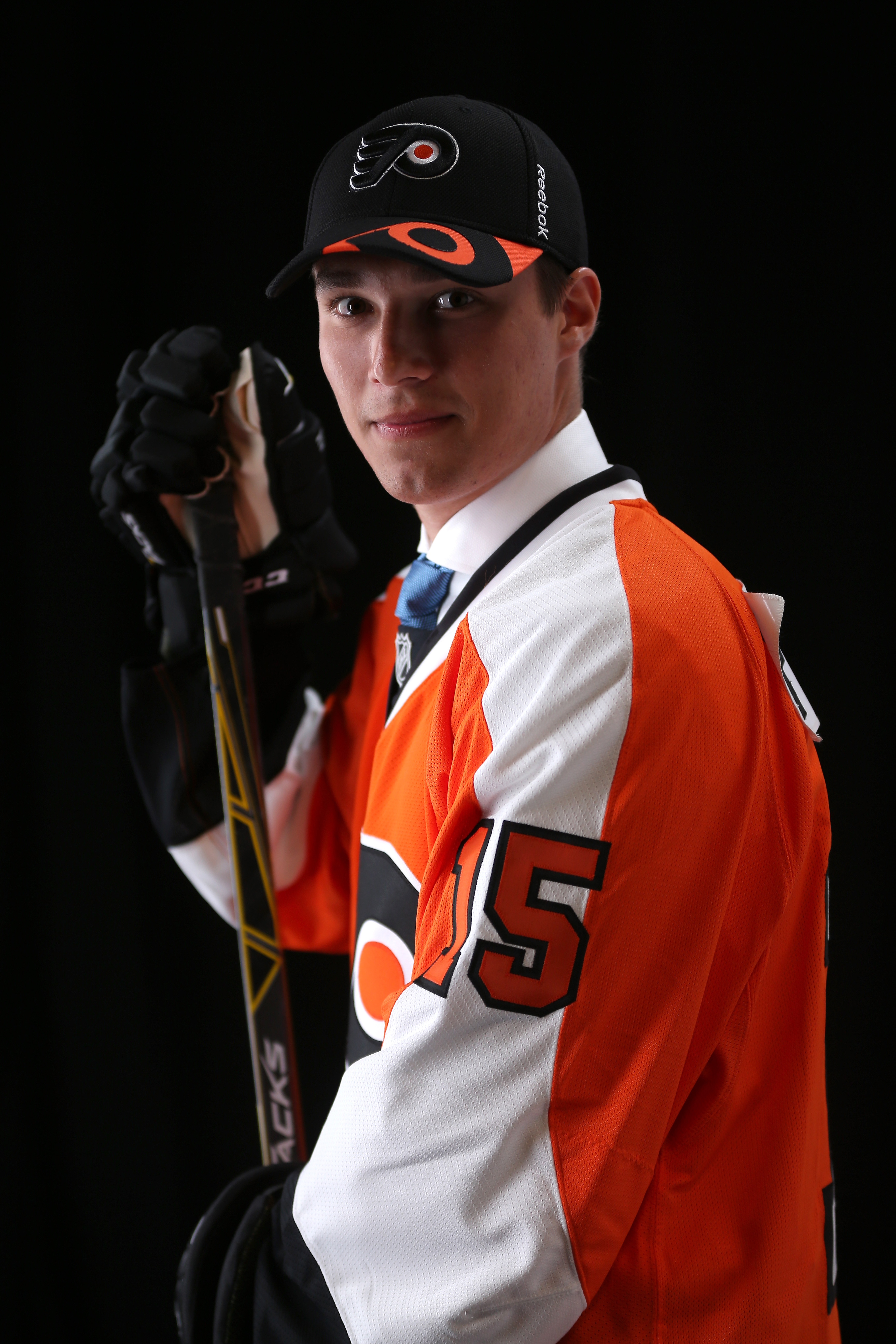 The Flyers of the past wouldn't have done any of this. Hell, the Flyers of two years ago wouldn't have done any of this. They would have done anything to get into the playoffs this year, looking at the short-term over the long-term in almost every case. They would have continued giving up the future for the present, even though that we can largely agree that's not how Stanley Cups are won and dynasties are built in the modern NHL. Just look at Los Angeles or Chicago or any recent Cup champion aside from the Red Wings.

The Flyers of the past are how you get contracts like Andrew MacDonald, or Ilya Bryzgalov, or Vincent Lecavalier. It's how you get trades like James van Riemsdyk for Luke Schenn. Teams that make these mistakes don't hire coaches like Dave Hakstol. It's how you make the playoffs a lot and sometimes even take a run, but ultimately never win the thing. Or, best case, you win once and then wait another decade to contend again.

Teams like the old Flyers would absolutely, positively panic knowing that the playoffs are basically unreachable before the season even starts. 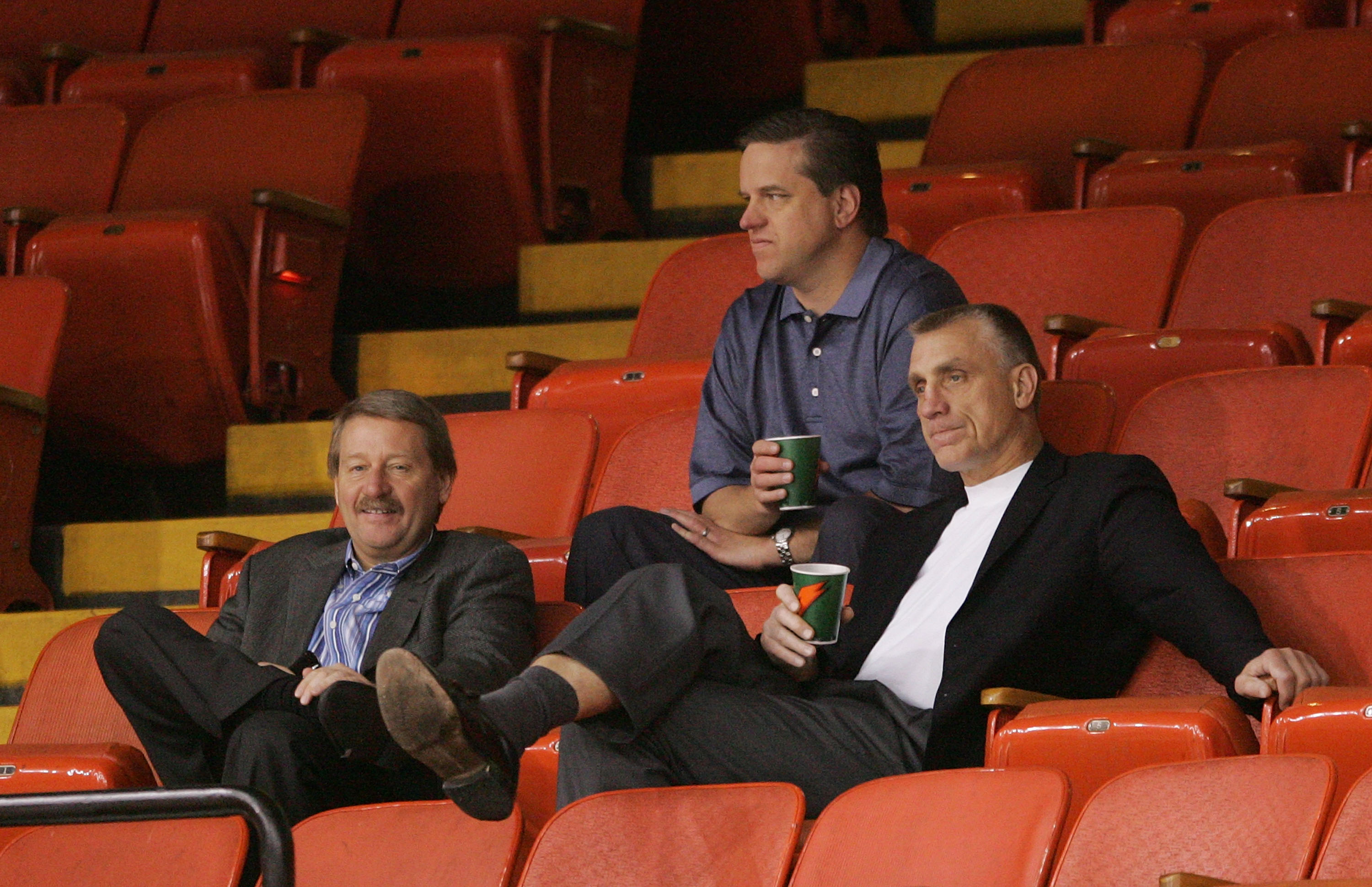 Holmgren, thinking about which prospects to trade. (Getty Images)

The only difference between the Flyers of two years ago and the Flyers of today is Ron Hextall. You could say that Paul Holmgren started to lay the ground work for the new Flyers with the 2012 draft, where they selected Shayne Gostisbehere and Scott Laughton and Anthony Stolarz ... but that was basically because he realized how badly he had pillaged the farm system in the years prior. He had to start drafting talent at some point.

Remember: the scouting has always been pretty good, but thanks to Holmgren (and his predecessor), they hadn't had much to work with for years. Between 2007 and 2011, the Flyers made a total of four picks in the first two rounds of the draft. Only one of those players, Sean Couturier, is still on the team -- and the pick used to acquire him was only available because Holmgren blew up his team the day prior. They traded away a first-round pick for Steve Eminger.

Hextall has kicked the build-from-within philosophy into full gear since taking over as GM. With Provorov and Konecny and Travis Sanheim and Samuel Morin (also selected under Holmgren) and Gostisbehere and Laughton and Robert Hagg and any number of other players, the Flyers' farm system is in the best shape we've seen in ... over a decade?

Holmgren's Flyers almost certainly would have moved some of these assets -- either before or after the draft -- in an attempt to win sooner than later. With Hextall, the commitment to actually growing these players into quality NHLers inside the organization is obvious. There's a better overall commitment to the AHL program (as compared to no commitment under Holmgren) and, most of all, there's a lot of patience.

On top of that, Hextall has somehow found a way to shed a ton of Holmgren's dead weight -- arguably the hardest part of all of this. Craig Berube, Grossmann, Pronger, Rinaldo, MacDonald (via waivers, but nonetheless) ... all of that, and it's hard to imagine he's done. We know he's trying to move Luke Schenn and that he's tried to move Lecavalier, and he'll keep trying.

It's for these reasons that Ron Hextall, Flyers general manager, is the most exciting thing going in Philly sports. I know that Sam Hinkie and the Sixers have been all about the long-term view -- #TrustTheProcess -- for a while now. It does appear that despite some setbacks like Joel Embiid's injuries and some awkward moves like the Michael Carter-Williams trade, things are still looking up for that franchise over the long-term.

What Hextall is doing with the Flyers is unprecedented.

But the 76ers were a team with no recent success, zero expectations and brand new ownership when Hinkie took over. Blowing a team to bits for long-term gain is a common strategy in the NBA. What Hinkie's doing isn't necessarily unprecedented, although he's certainly taking the existing precedent to wild extremes.

What Hextall is doing with the Flyers is unprecedented. The sheer fact that he somehow convinced owner Ed Snider to go along with all of this is a miracle in and of itself. But that he's doing it without completely blowing it to bits -- we're never going full Oilers here -- is equally as impressive.

The Flyers have never been a "Take Two Steps Back To Take Three Steps Forward" kind of team, but that's what tends to work in the NHL these days. In just a year-and-a-half on the job, Hextall has the Flyers on a path largely different from the one they've been on for the last 45 years.

It's a path that very well could make the Flyers the next Philadelphia team to compete for a championship.