Because why the frick not.

Share All sharing options for: Sorting the 2015-16 Flyers roster into Hogwarts houses

The NHL's Puck Personality series is a bunch of videos featuring the NHL torturing their stars (a majority of whom are totally without personalities) with personality questions. Last year, they posted an absolutely hilarious video of NHLers attempting to name the four houses of Hogwarts. Both Claude Giroux and Wayne Simmonds are featured in the video, struggling mightily as they succeed in naming just one of the houses.

Rewatching the video got me thinking, though. If the Flyers were sorted into Hogwarts houses, where would they belong? After a long and arduous sorting process, I think I nailed it.

→ I know absolutely zero things about Radko Gudas except that he has a tiny little baby, a nice beard, and a cool name. Ravenclaw, because I can't be bothered. I'm off to a bad start.

→ Brayden Schenn tries hard, I think. Brayden Schenn wants what's good for the team, I think. Brayden Schenn is constantly getting shifted from center to wing and back again. He takes it all in stride. And even though he's become somewhat of a sore spot for some fans, last year he put up respectable numbers despite the tumult of the season. Also, if Brayden was at Hogwarts, you know he'd appreciate his dorm being right next to the kitchen. Schenn is a Hufflepuff. You know it in your heart. 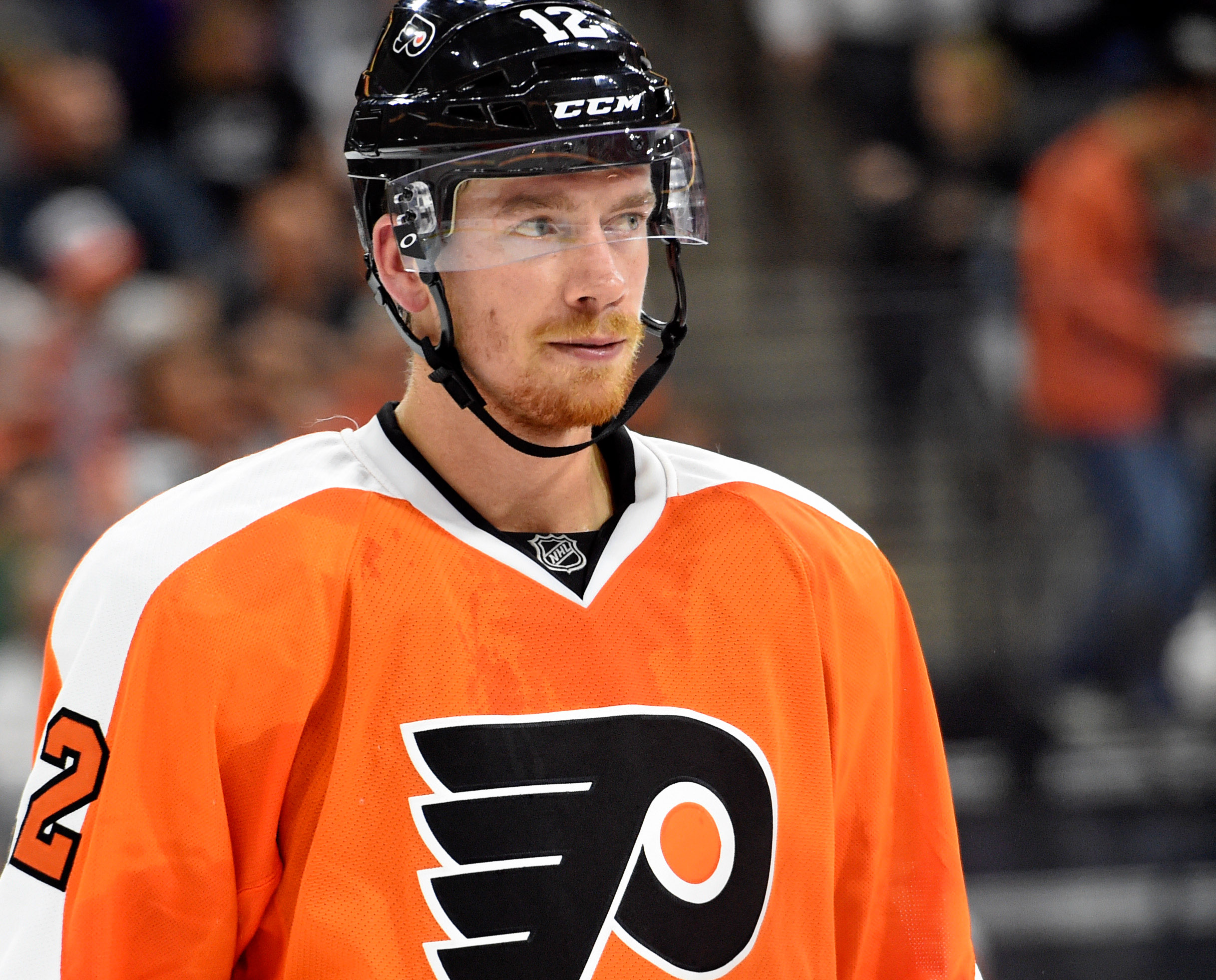 → Michael Raffl is a Slytherin. And before I go any further, I want to make it clear that it's not an insult. Raffl came into this team (and into the league, really) through hard work, making his way through the Austrian and Swedish leagues before getting noticed on an international level. Once he cracked the Flyers roster, there was no looking back. He's constantly taken advantage of every opportunity presented to him, showing some pretty desperate ambition even when playing fourth line minutes. Similarly, look at his shifty eyes.

→ I struggled with sorting Sean Couturier. Again, at first glance, I'd immediately lean towards Gryffindor. Who could blame me? He's got that dopey sort of bravery to bunker down in garbage zone starts and still say that he needs to produce more offensively. Plus, the gap tooth grin makes him look a little silly, but loveable silly. Really though, Coots is probably one of the smartest forwards the Flyers have. On top of that, Randy Miller reported that Couturier made straight As in school, wants to work in stats after his career in hockey, and at one point, was speaking three languages. I used to call him a dumb golden retriever. Looks like I'm the idiot. Dude's a Ravenclaw.

→ Michael Del Zotto is the Slytherin your mother warned you about. Steer clear. (He's also taken the chance the Flyers gave to him to restart his career here in stride, and he's done a pretty great job of it.)

→ Wayne Simmonds is more complex, I think. Of course, my initial assessment was "Wayne Simmonds, Gryffindor. Easy, who's next?" as I think it would be for most people. And it's true, I do think Simmonds would be a natural fit into Gryffindor. He's a natural leader, which is why it was a no-brainer for him to get the A last offseason.  At the same time, he's opportunistic and seems to take pride in his ability to get a little dirty when he needs to, so Slytherin isn't too much of a stretch. In the end, though, I think Wayne would call himself a Gryffindor, and as we all know, choice counts more than anything. 17 is a Gryffindor.

→ R.J. Umberger is a Ravenclaw for no other reason other than the fact that I think he's a dork who probably loves doing crossword puzzles.

→ Scott Laughton is a very serious young man who should maybe mix in a smile every once in a while. Truthfully, he is a very focused and very determined player who just...seems very much like a leader, even though he's young and his hold on a roster spot is tenuous at best. Scott Laughton is the type of guy that I want in the driver's seat. Or, at the very least, in the passenger's seat being the navigator. A young Gryffindor. Done.

→ Luke Schenn is a Gryffindor because when I think about him in a lion costume, I go into a fit of giggles so please don't question my judgement. Otherwise I'll be forced to think about Luke Schenn in a lion costume much more than I already have, and I may never emerge from the giggling fit. (Also like...the guy was being prepped for the Leafs captaincy since his draft day. He's got natural leadership abilities. Plus his smile is so charming and chivalrous. I would let Luke Schenn open all of my doors for me if that was an option. Luke Schenn is Neville Longbottom, and I am eagerly awaiting his emergence to hero status.)

→ Brandon Manning's face perpetually looks as though he's seen a ghost. What is he scared of? Why is he so terrified? I don't know. All I know is that he's still playing hockey. What an incredible amount of courage for such a nervous young man. Gryffindor.

→ Matt Read had a bad season last year, not really living up to the level of play we've come to expect from him. However, because it was pretty clear that he was putting in loads of effort and working through injury, it's also clear that Read is a hard-working and loyal Hufflepuff through and through.

→ Ryan White is the type of person that is definitely a Slytherin, but not your typical Slytherin. He's like, the main guy who proves that #NotAllSlytherins are shitty. On the outside looking in, White seemed like just another depth signing and I wasn't really crazy about him, but he's contributed well and gained a lot of traction on the revamped fourth line. He arrives in ill humor, but he's smart about it. Great Slytherin. Love you, White.

Claude Giroux is your prototypical Gryffindor

→ Claude Giroux is your prototypical Gryffindor. He's that guy who'd score that stupidly pretty goal in the dying seconds of OT to keep the team from going to the dreaded shootout. He's that guy who's gonna try and lay out the best player on the other team because he wants to make the building go nuts. He's the guy who, when you ask him what he'd change about hockey, he says he'd make the goalie pads smaller and the nets bigger. He's James Potter, complete with the messy hair, charming arrogance, and slimy Severus Snape-esque enemies (lookin' at you, Mayo Boy.) Throw that Head Boy title at him. He deserves it.

→ Michal Neuvirth is a Hufflepuff. I don't know much about him, but he looks like Fievel Mousekewitz, so I feel confident calling him a Hufflepuff. Sometimes you can just tell.

→ Mark Streit is just a humble Hufflepuff, quietly putting up great numbers for being an older defenseman and holding the defense down. But he doesn't care about all the glory. He just wants to make people happy. God, I love Mark Streit. What a cool, great, beautiful piece of Swiss chocolate. 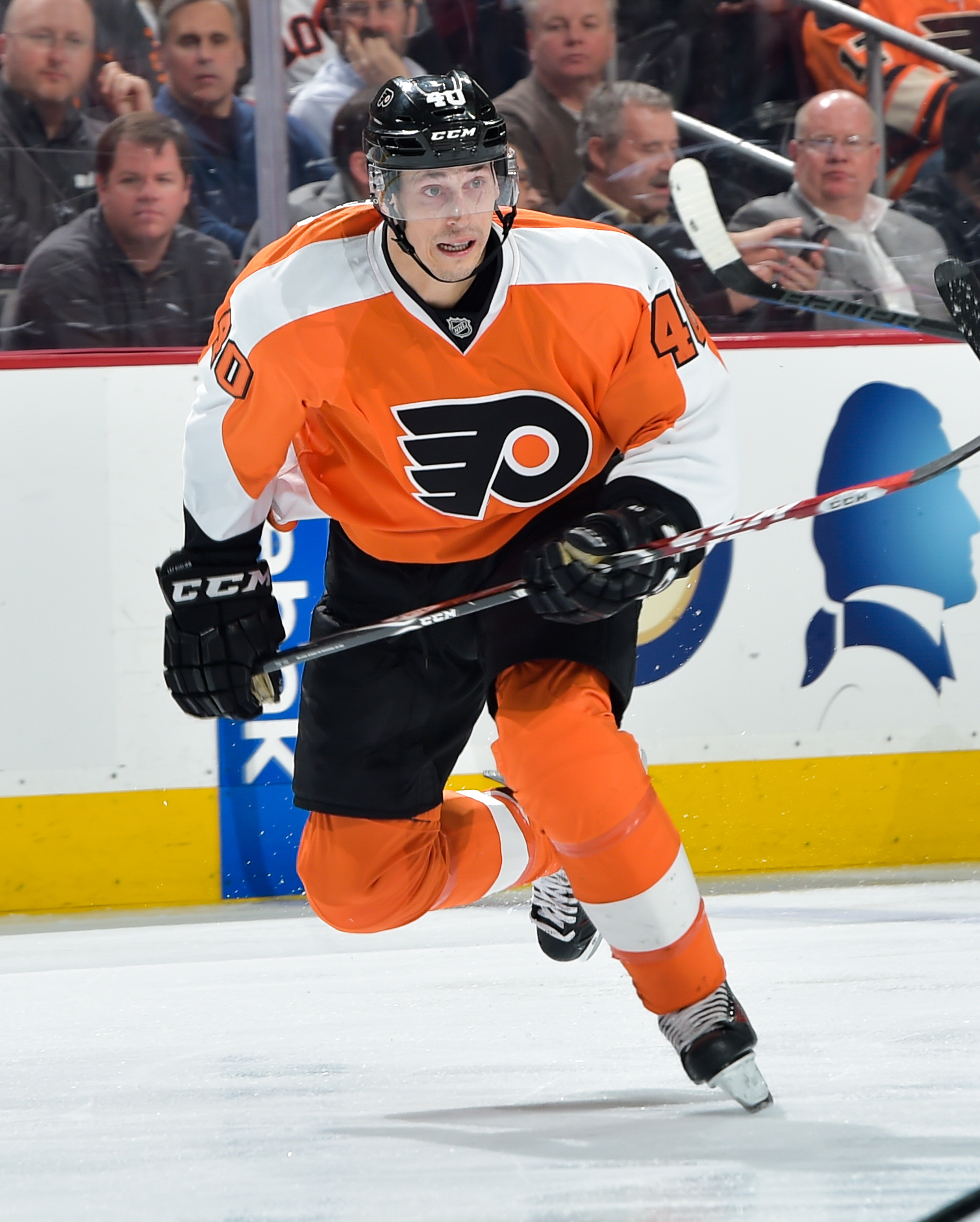 → Vinny Lecavalier is a Slytherin. When he signed with the Flyers, he saw Peter Laviolette and the promise of a high-powered offensive system and that was all he needed. He pounced on the opportunity, excited for a fresh start, and then...well, you know the rest of the story. Vinny's looking for a comeback year with a new coach, another fresh start. I'm hoping the Slytherin side of him takes over, and all that ambition comes out.

→ I don't care very much at all about Nick Schultz, definitely not enough to put more than a minute's worth of thought into his sorting, so he's a Slytherin.

→ Speaking with the utmost love and respect, Chris VandeVelde was a relative nobody when he earned a place on the team last season. Sure, he had played some games with the big club, but he was mostly known as an AHL guy. No longer. CVV is a legit NHLer now, proving me wrong and making huge strides in his game. Hard work. Dedication. Friendship with his fellow fourth liners. Hufflepuff.

→ Pierre-Edouard Bellemare is a Ravenclaw. How do I know this? He's French. That's enough for me. But seriously, can't you imagine PEB just cruising around Philly on a longboard, a beat up copy of Camus's  L'Etranger in one hand, and an artisanal coffee in the other? You totally can. Pierre-Edouard is a hipster-y Ravenclaw, and I won't hear arguments on the matter.

→ We don't know too much about Evgeny Medvedev besides what we've heard and what we've seen in the preseason. I don't know, though...I trust him. He looks smart. He plays smart. I think he probably wears suspenders in his free time. I vote Ravenclaw.

→ Sam Gagner is a big silly Hufflepuff, and I love him. Have you seen him forget what town he was born in? What a Hufflepuff. I love you, Sam Gagner.

→ Jake Voracek is crafty. He knows how to carry the puck and he carries it well, shifting through traffic easily. He finds lanes where other players wouldn't. And, despite the fact that he's not much of a pugilist, he stands up for his teammates when he sees the need. Ultra-loyal. That's a Hufflepuff if I've ever seen one. Plus, come on. That goofy smile? That goofy hair? His adorable friendship with just about every Flyer? Hufflepuff, for sure.

→ Finally, Andrew MacDonald is Lord Voldemort, and even though he's been sent to Lehigh Valley, we need to find the horcruxes in order to destroy him. I firmly believe that Nick Grossmann's contract was one of them, so we're already down to six. We're getting there, you guys. There's a light at the end of the tunnel. (Comment with what you think the rest of the horcruxes are. I've got some ideas, but we have to make this a community effort.)