6 candidates that could replace Jim Rutherford as Penguins general manager

The Pittsburgh Penguins should fire general manager Jim Rutherford. But who would take his spot?

Share All sharing options for: 6 candidates that could replace Jim Rutherford as Penguins general manager

After a schadenfreude-inducing first round loss to the New York Rangers, the Pittsburgh Penguins should give general manager Jim Rutherford the boot.

It seems like they might keep him around according to recent reports, but most people not named Jim Rutherford want him out, super geniuses like Mark Madden have repeatedly made totally rational cases as to why Rutherford should be fired.

He failed to build a team that with Heart™, Grit™, and Passion™. Even though they had a healthy dose of top-level talent, the Penguins just didn't want it enough™ and were struggling in the motivation™ department.

The Penguins' collapse this year was the culmination of an entire year of bad moves on Rutherford's part. Sure, a single year isn't necessarily enough time to erase the mistakes committed by former Pittsburgh GM Ray Shero, but that doesn't matter. Rutherford should have overhauled the team immediately and made them magically the best in the NHL. At least that's what the top-tier Facebook commenters are saying.

Anyway, because we here at Broad Street Hockey are always looking out for the Penguins' best interest, we figured we'd give a little run down of some of the more capable candidates for their soon to be vacant GM spot. This list is not meant to be exhaustive, but rather a well-rounded taste of whom the Pens might want to choose.

Sidney Crosby's agent, Pat Brisson, gets the top spot on our short list, if only because last year after Shero's dismissal, there were reports out that he might get offered the job. Of course, Brisson makes logical sense as he knows the full value of the Penguins' franchise center (the actual dollar value according to Brisson is eleventy billion dollars per year). Sure, GMs and agents tend to be less than friendly to each other, but what better way to smooth that relationship by making them the same guy?

What's more, Brisson would be able to easily bring other players that he represents over to the Penguins because that's totally how it works. Imagine the likes of Patrick Kane and Nathan MacKinnon on the Penguins, both making the maximum salary to satisfy Brisson's financial needs, yet somehow fitting under the cap to satisfy those of the Penguins. It really is a win-win.

The only possible problem with him becoming GM is that he probably won't be able to get any top free agents to come to Pittsburgh, as his reported strategy for negotiating with players he doesn't represent is by offering them the numbers on their jerseys.

Again, another option with close ties to the cornerstone of the franchise. Sidney Crosby's mom is very bullish on Sidney Crosby, and will reportedly do whatever it takes to give her darling son what he needs. In an email exchange with Broad Street Hockey, Sidney Crosby's mom claimed that "no one better touch my baby" and that "look at this picture of Sidney, isn't he just adorable?" Sidney Crosby's mom went on to claim, "that doo doo head Mr. Rutherford just didn't fill the team with enough guys to keep the meanies on the other team away from my boy."

While she certainly seems dedicated on building the team around Crosby (something Rutherford failed to do), there are some downsides to Sidney Crosby's mom taking the GM spot. Repeated interruptions in the locker room to give players lemonade and cookies could really draw the attention away from winning, and her lemon bars kind of suck (admit it, they do).

I think at this point, it's clear that the next GM will have to give Crosby what he wants. Well I can't think of anyone who knows what Crosby needs better than Crosby himself. It really is that simple.

OPTION 4: THIS GUY FROM HFBOARDS

As Rutherford's Penguins were stumbling down the stretch, the analysts over at HFBOARDS were scrambling to give their piping hot takes regarding what had just happened. While a lot their analysts were correct that Rutherford should probably be exiled and shunned by the hockey world, user "pixiesfanyo" really hit the nail on the head. In a post made the other day, he/she showed that he really knew what he was talking about:

"Rutherford should've never have been hired. He's terrible in every aspect of management. The fact that he has a better roster than last year and that our team is notably worse and more importantly completely directionless should be the nail in his coffin."

Not only is pixiesfanyo again right in his/her analysis, but also takes the criticism of Rutherford to another level. Rutherford's management is so  bad that firing him simply isn't enough. Rutherford needs to be shoved into a coffin, sealed inside, and buried alive. It's the only reasonable thing to do.

Because of his crack analysis of the Rutherford's blunders, pixiesfanyo could make an interesting pick for the Penguins next GM. The only problem is that he might hinder his team's chances of building for the future by offering a third round draft pick in every damn trade. 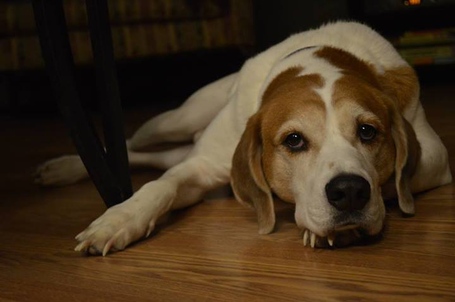 And while you all may scoff at the notion of making a dog the next general manager of a multi-million dollar franchise, you couldn't be more wrong. This dog has an innate ability to sniff out top-level talent at the draft, and can fetch some of the highest profile free agents. Make no mistake, when he sees a player he wants, he marks his territory in a hurry.

His management style is nothing to growl at either -- he'll bark at players who are disappointing, but knows when to give a bone to the players who are performing their tricks.

Of course, there are some downsides. He isn't house trained, and would do best in a home with older or no children as he's a bit aggressive around food.

Rich in Vitamin A and beta-carotene, it's clear that a carrot could help improve the Pittsburgh Penguins. Seriously, what can't this wonder vegetable do? -- it can induce menstruation, treat flatulence, treat digestive problems, and more. Talk about the total package!

I mean, the damn greens of a carrot are edible. And like, if you want a little sugar but don't want to eat a candy bar or whatever, where you gonna go? A carrot, that’s where.

Honestly, there really aren't any downsides with choosing a carrot as the next GM.

So there you have it, the best possible choices for the next general manager of the Pittsburgh Penguins. Did we miss any close relatives of Sidney Crosby? Or maybe you think a different root vegetable is up to the task. Let us know in the comments.