Marner, the small but ridiculously talented center/winger prospect, edges out Noah Hanifin for the No. 4 spot in the BSH Community Board.

We continued assembling our community draft board yesterday, as we look to decide what we (that second "we", in this case, being "you"!) want the top of the Flyers' draft board to look like on June 26 when the draft begins. For the second straight day, a forward sat atop the voting, with London Knights forward Mitch Marner taking a 54 percent majority of the vote to grab the No. 4 spot on the big board.

While the guys ahead of him are mostly bigger players who project as pure centers, Marner is a bit smaller of a forward who has spent time at both the center and right wing position over time. The biggest knock on him out there, by far, is the question of whether or not he can play at a high level in the NHL despite being a smaller player -- he measured at the Combine at 5'11" and just a touch under 160 pounds. So whoever picks him will almost certainly do so knowing that he'll need to bulk up a bit (and hoping that he can add another inch or two). 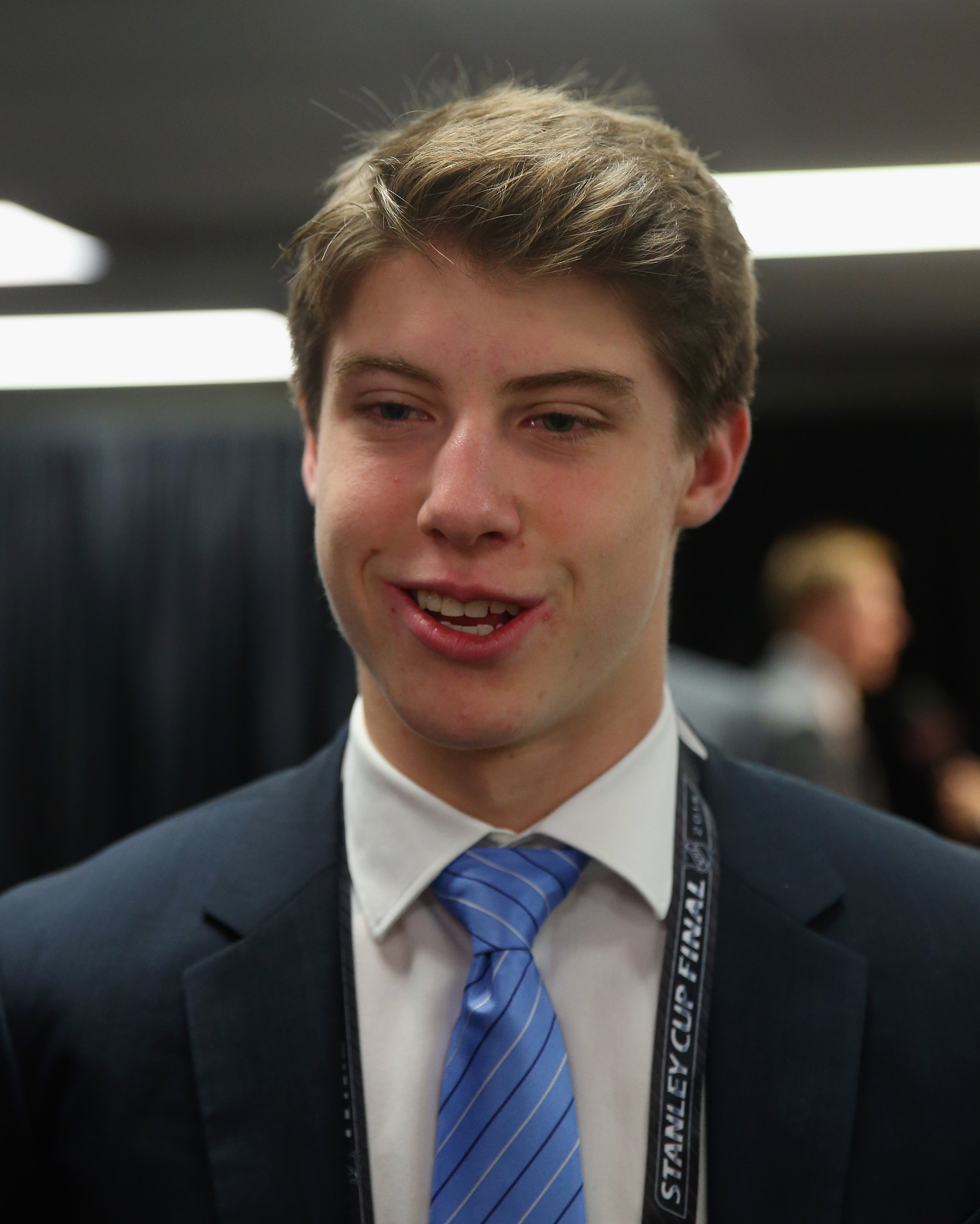 Outside of questions about his size, though, there's very little not to like about Marner's game. His skating and ability to puck handle his way into high-danger areas are both up there with that of anyone in this draft not named McDavid. He complements the ability to produce on his own with his superb passing, making him one of the most dynamic offensive talents in the draft.

And while defense is probably not the first thing that comes to mind with him, he's fairly good in that area, and even played on the penalty kill some this past season. His highlights will come in the offensive zone, for sure, but he can be that "200-foot player" that teams always look for to go along with his offensive ability.

All of this helped him score exactly two points per game (44 goals, 82 assists in 63 games) for London this past year in the OHL. That he played for a loaded Knights team certainly helped on that front, but that shouldn't for a second detract from what Marner did this past year.

By far, the current player comparison I've seen most frequently for Marner is another guy who was a small but incredibly skilled forward for London a number of years ago: Patrick Kane (who, by the way, was listed at 5'10" and 160 pounds leading up to his own draft). That, of course, is a high standard to live up to (most draft/player comparables are), but Marner's incredible offensive talents lead you to think he can get there with a little luck and development.

Were Marner to make it to the Flyers, it'd almost certainly have to be via a trade-up -- we've seen small, talented players fall in the ranks before, but it's very hard to imagine Marner doing that this year. If he were on the Flyers, they'd have a ton of flexibility with how they'd want to use him. He's mostly played on the right wing when not in the middle, but if he can move to the left side, could he and Claude Giroux play alongside each other? Or would the team just be better served using him as a second-line center (or right wing)?

There are a lot of possibilities, all of which are quite tantalizing. But again, he ain't gonna be there at 7, so unless a move is coming, Marner is not. Though, Sam Carchidi of the Inquirer did mention the other day that the Flyers "are high on Mitch Marner". So, y'know ... juuuuuuust something little to watch out for.

Marner edged out Boston College defenseman Noah Hanifin by about 50 votes for the spot here, but Hanifin ended up well ahead of the rest of the competition, so the BC freshman rearguard is the favorite to be the pick of you, the people, here at No. 5. Still, we'll add one name to the ballot for now -- another highly talented college freshman defenseman.

Werenski, who is a lesser skater than his American counterpart Hanifin and less physical than Provorov, might still be the most offensively gifted of the trio ... League wide, Werenski finished first among U19 defenders in scoring and fifth in overall U19 scoring, behind Jack Eichel (2015), Dylan Larkin (Red Wings), Brett Seney (2015), and Alex Tuch (Wild) ... Werenski played big minutes as an NCAA rookie, including on the top powerplay unit, where he accumulated many of his points on route to his All-Big Ten Hockey First Team selection. ... While Werenski might be the most offensively gifted player in the class, he's also incredibly smart and picks his spots effectively. His long stride works to his advantage when he's hopping into the rush and his shot is lethal in the same way Provorov's is. ... He doesn't have the heaviest slapshot, but it finds it's way through and his snapshots are among the most dangerous in the class in the high slot.

The 2015 BSH Community NHL Draft Board

As always, please use your vote below to answer the following question: If all of the players listed were available when the Flyers were on the clock, who would you want them to pick?