Could the Flyers look to make a move up from No. 7 into the top 5? And should they?

Share All sharing options for: NHL draft 2015: Should the Flyers try to trade up from the No. 7 spot?

On Friday, Travis wrote about the players in the lottery of this year's draft, and how the Flyers are just about guaranteed to come away from the first round with, and I quote, "an excellent prospect."

And that's true! There are a lot of really good prospects even beyond the very top of this draft. Who are the best ones, though? That depends on who you talk to.

Forwards Lawson Crouse, Pavel Zacha, Mathew Barzal, Timo Meier, Mikko Rantanen and Travis Konecny are guys whose exact rankings will vary widely depending on where you're looking, but who all have a lot to be excited about. The same goes for talented defensemen like Ivan Provorov or Zach Werenski. Point is, whatever the Flyers' tastes are, there's going to be a lot on the board to really like if they stay at No. 7.

Still  -- let's talk for a second about prospects to really, really like.

While there are undoubtedly a lot of really good prospects between the sixth and the 15th or so spots in this draft, there's a ton of debate on exactly how to rank the guys in that range. They're all exciting, but just about all of them come with one or two obvious question marks. A guy who's sixth on one list may be 15th on another. Some are surely better than others, but you may not be totally wrong to lump most of those guys in one tier together.

Point is, there's a lot of disagreement in how exactly to rank the folks in that range.

Where people seem to have very little disagreement is at the top of the draft. Even beyond the obvious one-two of Connor McDavid and Jack Eichel, the third, fourth, and fifth guys are pretty widely agreed to be Erie center Dylan Strome, London center Mitch Marner, and Boston College defenseman Noah Hanifin.

The exact order in which those three are ranked is indeed up for debate, but you're hard-pressed to find many folks who would publicly have any of those three players ranked lower than fifth. In other words, there's a separate tier between the very, very top of the draft and the tier that will be prominently featured where the Flyers are drafting.

Which prompts the question: would it be worth it for the Flyers to try and get in that tier?

The talent at the top

First, let's discuss the three guys who are the focal point of the discussion. Of the three, Hanifin may be the one who's most likely to fall out of that top group, largely due to the strength of the defensemen behind him. Provorov, in particular, has been gaining some steam both in public and reportedly among NHL teams, and could even end up being the first defenseman off the board when all is said and done.

Still, for now, Hanifin is generally regarded as the best defenseman in this draft. We've discussed him (and the outright potential of him just falling to the Flyers at No. 7) here before, and with his combination of high-end skating ability, size, and hockey sense, it's easy to see why he's so high on most boards. As excited as Flyers fans are about the team's current stable of defensive prospects, he would almost certainly be the best one yet. 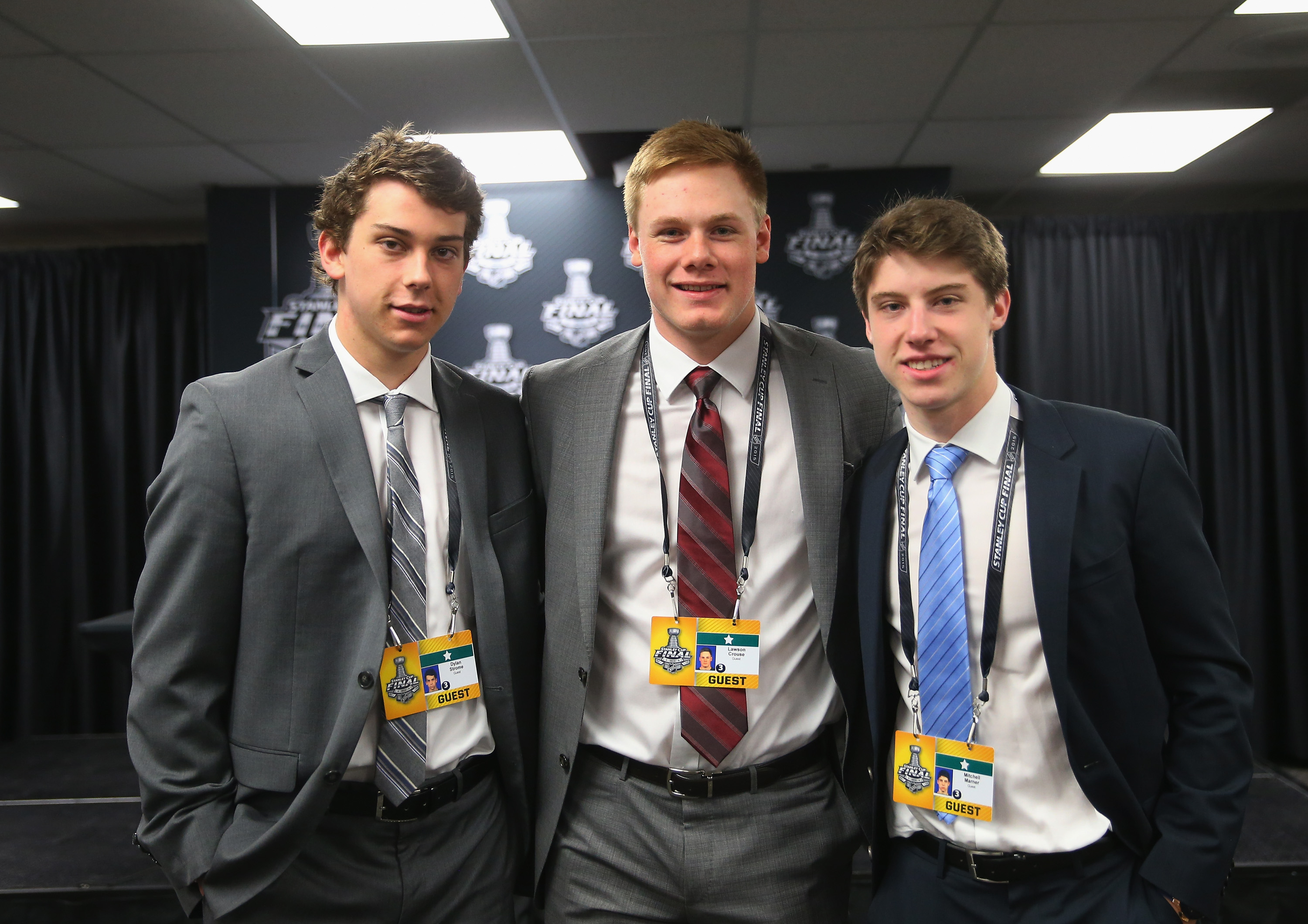 The two forwards in this group are both also quite exciting prospects, albeit fairly different ones. Dylan Strome, a natural center, is the kind of guy teams at the top of the draft salivate over. He pairs his 6'3 frame with some of the best raw skill and offensive vision of anyone in the draft. He can create for himself and others, and would probably be the odds-on favorite to go first overall if McDavid and Eichel weren't around.

Mitch Marner, meanwhile, is a guy who primarily played center but has experience on the wing and may project there as an NHLer. The main knock on him is his size, as he stands at 5'11" and 160 pounds. If he's able to add some weight, though, which he certainly should be, look out.

He's hailed as a good two-way forward who's aggressive in all three zones, but his real calling card is in the offensive zone. His scoring numbers are just eye-popping, as he hit exactly two points per game for London in the OHL. There's not much to dislike about what he offers. (For the record, were the Flyers to move up, he's the one I would most covet.)

The Flyers would be thrilled to walk away from the draft with any one of those three guys. The question here is if they'd be thrilled enough to make a move to ensure getting one of them.

Of course, if you're looking to make a trade, you need someone who's willing to make a deal. But while there's no guarantee the right deal is out there, it seems like there may be some teams above the Flyers in the draft that are at least keeping the idea in mind.

Up at No. 3 overall, Arizona has already been asked about their pick, and it appears to at least be considering making a move down if the right offer presents itself. Three teams have talked to them already -- could one of those be the Flyers? Who knows.

But it seems like the most likely trade-up spot may be No. 4 overall, at which the fine folks over in Toronto are kicking around the idea of moving back to try and pick up some other assets. In his profile of Ivan Provorov, Scott Wheeler over at Pension Plan Puppets surmised the following:

Where Provorov will come into play is if the Leafs feel they can trade down and acquire another pick or two (the Leafs currently don't have a second round pick) for a team eager to draft Hanifin or one of the two potential first line centres available inside the top five.

And over at The Leafs Nation, they talked more about the possibility of trading down, and even singled out the Flyers as a possible trade partner:

One intriguing target might be the Flyers at seventh overall. While a lower pick and later-round selection might not be enough to move the needle for the Leafs, Philadelphia holds the Lightning's 29th or 30th pick (depending on the outcome of the Cup final) on top of that seventh slot. Toronto could move down and still nab a player like Barzal, Provorov, even Zacha, then have two picks later in the round to do more damage.

There are indications in both of those pieces that the Leafs either a) believe that the gap between that Strome / Marner / Hanifin tier and one or two of the folks in the next group may not be that large, or b) simply have a target in mind that isn't one of those three (potentially Provorov or Seattle center Mathew Barzal). In either case, if they're looking to pick up assets while still having their choice of guys in that next tier, they likely aren't going to want to move down very far. Which is why the Flyers, only three picks behind them, would make sense as a trade partner.

What an exact deal would look like is anyone's guess, but it seems likely that the Leafs, who don't have a second-round pick in this draft, would request the Flyers' other first-rounder (courtesy of Tampa) in a deal. Though that pick will of course be towards the very back end of the first round (either No. 29 or 30), it alone may be enough to get a deal from No. 7 to No. 4 done, based roughly on the value of draft-pick deals made in the past*.

Would trading up be worth it?

That wouldn't be a cheap move. First-round picks are great, having two of them is a lot of fun, and it'd be a shame to lose one. And it's certainly possible that the Flyers feel the exact same way that Toronto may be feeling -- that there are guys at No. 7 that they like enough to not make it worth the cost to move up -- in which case, none of this matters. 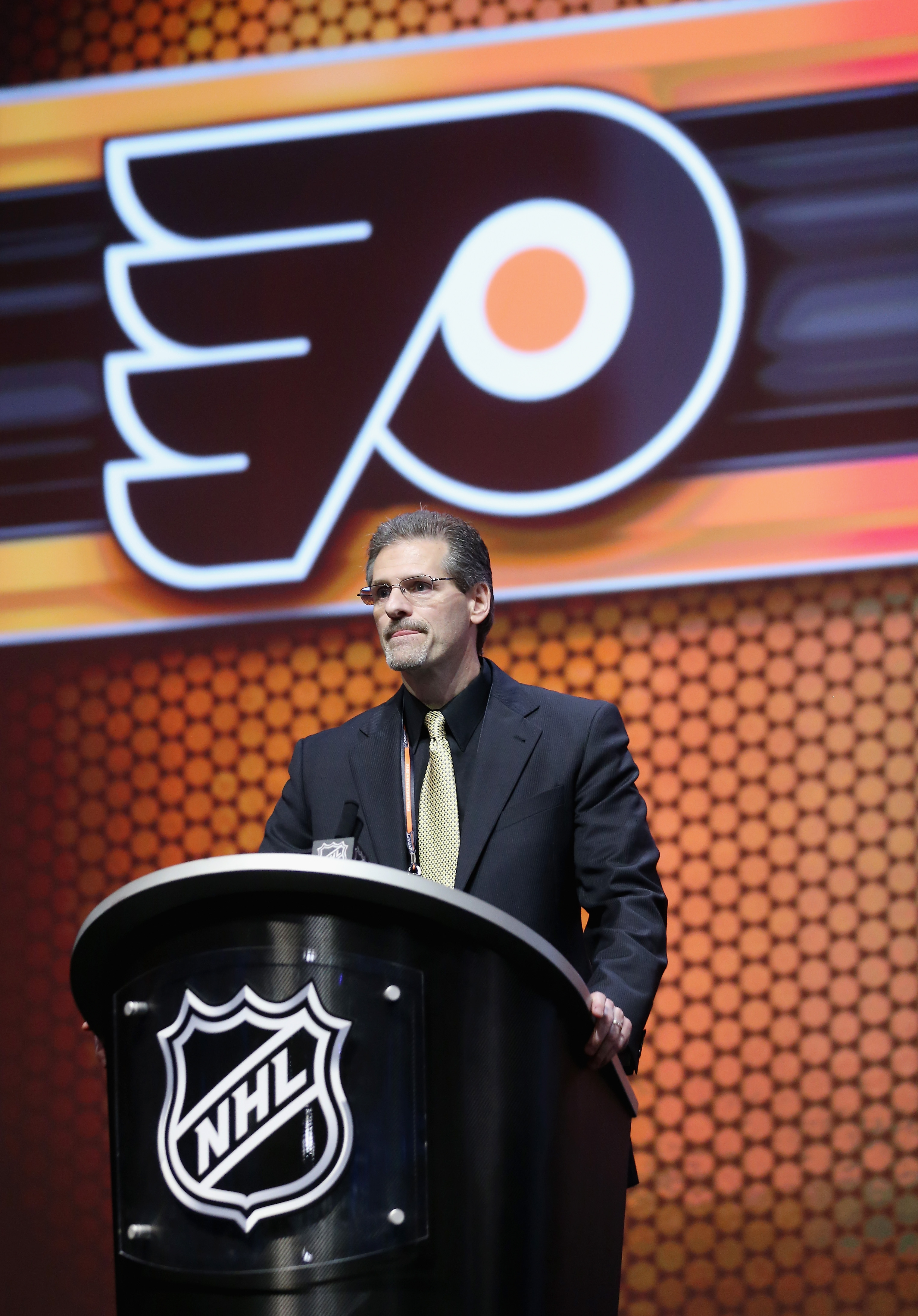 But let's say, for fun, that they don't feel that way, and that they really do like at least one of Marner or Strome or Hanifin a lot more than they like the guys who will be on the board at seven, and whichever guy they really like is on the board come Toronto's pick. If that all falls into place, don't you have to at least consider making the move?

It's great to have a lot of good players in your pipeline, and at seven and 29/30 the Flyers have a chance to get two of those. And if both of those guys turn into good NHLers, the Flyers will be that much better off.

But there's nothing that kick starts a team's progress in the right direction more than a truly elite player. If the Flyers think moving up significantly improves their chance at one of those kinds of players, and if they have confidence in their development system to get the most out of whoever they pick, it'd be tough to say no.

The old saying goes that if you get the best player in a trade, you win that trade. While that may be oversimplifying things a bit, the point is that if Marner or Strome or Hanifin hit their ceilings as NHL players or even come close, it's just about impossible to envision a scenario in which the Flyers would regret giving up one late first-round pick to get them.

So I don't know if the Flyers should try to make a trade up, because I don't know how they feel about Marner, Strome, or Hanifin. But if they see sky's-the-limit potential in any of them, the way a lot of people do, they absolutely should think long and hard about it.

*Note: The model that our own Eric T. used in that post is admittedly more of a projection when it comes to top-10 picks, since those picks just don't get traded much. But the values given indicate that a deal like the one proposed above (No. 4 for No. 7 and No. 29/30) is at least in the right ballpark when it comes to equal value.)