It's time for the NHL to get rid of TV blackouts

Because it really should not be this damn hard to watch a hockey game.

Share All sharing options for: It's time for the NHL to get rid of TV blackouts

There have been a lot of changes this offseason to how hockey fans watch the game they love.

Last month, we reported that the NHL would offer a new single-team version of NHL GameCenter Live, which potentially could be available on NHL Center Ice as well.

On Tuesday, the NHL will announce a groundbreaking new partnership with MLB Advanced Media, who will take over operations of GameCenter, NHL.com, the NHL Network and the league's 30 team web sites. It's a big deal, and overall it should be a positive change for the sport.

But problems remain. Big ones. None of these changes actually solve the biggest issues hockey fans face when it comes to watch their team: cost and blackouts. Both issues are completely tied together.

Blackouts run up the cost for hockey fans

Blackout restrictions are completely backwards, especially in an Internet world when more and more people are ditching the old-school, expensive cable/satellite subscription.

But obviously if you're cable or satellite company like Comcast or DirecTV, you want the customer's money. All of it. Your entire business model is based on people not just paying for what they watch, but paying for a big, fat bundle of channels each month, even if they only watch a handful of those channels.

And this right here is the exact reason why NHL games are blacked out so frequently, unless you follow those specific rules set out by the TV networks and the big companies that provide those networks to you.

You're probably familiar with how it all works, but in case you're not, here's the walkthrough. 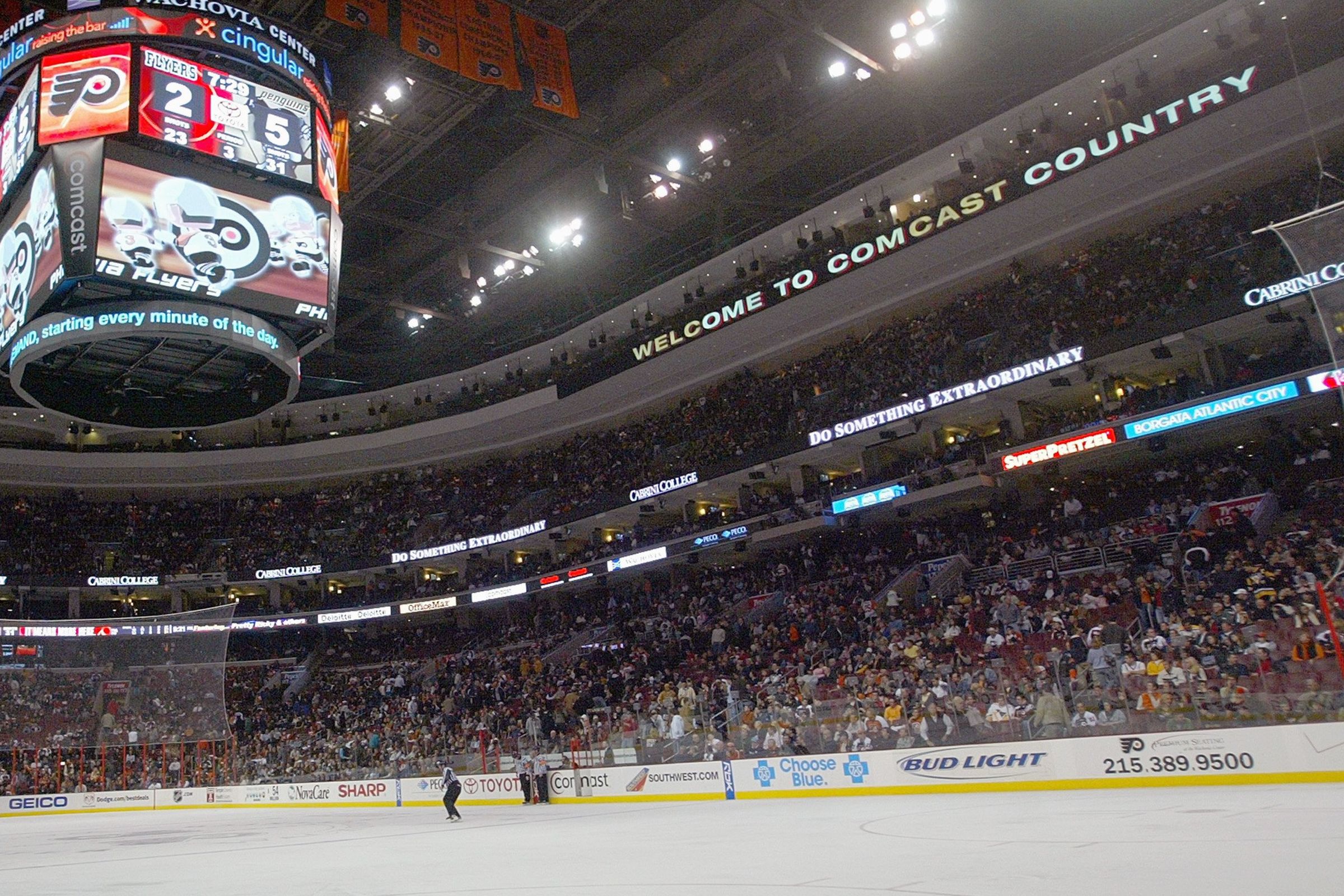 If you live in what the NHL considers the Philadelphia market, you cannot get Flyers games in any form other than via your television or satellite subscription.

This means you have to pay for a cable or satellite subscription that includes CSN Philly, The Comcast Network *and* NBC Sports Network. Comcast is the biggest TV provider in Philadelphia, so using their website and a Philly zip code -- 19130 -- we looked up the cheapest cost to acquire all three of these channels. It's $49.99 per month, and that's if you get just a cable subscription and ignore the fact that it's 2015 and you basically need the Internet to live.

So at the absolute cheapest, if you want to watch all Flyers games and you live in the Philadelphia market, you need to spend $500 per year -- and that's if you only keep the cable subscription during the 10 months of the season. It's also the absolute (probably unrealistic) bare minimum price.

It gets worse if you live away from your team

If you live outside of what the NHL considers the Philadelphia market, it's a lot more complicated. You don't get games via your local channels -- since you're not local -- so you need to buy a package like NHL GameCenter Live or NHL Center Ice to get those games. At the absolute cheapest during the 2015-16 season, you can buy a single-team package that gets you just Flyers games for $105 for the season. (We've already discussed why that price is too high.)

In an ideal world, you could pay for that product and get all the games. But blackouts fuck that all up.

Games on national TV -- NBC Sports Network and NHL Network -- are blacked out, so you're still tied down to an expensive cable or satellite subscription because you need those channels. The only way to watch those channels is if you pay for them via subscription.

I'll use myself as an example: I live in the District of Columbia, and I have DirecTV as my television provider because it's the cheapest option in my apartment building. I pay $54 per month for a tier that includes NBCSN and NHL Network, and that's on a two-year agreement so I am locked into that price every month of the year. That's $648 per year.

I also need NHL GameCenter Live. The best-case scenario is that I pay the $105 for just Flyers games on GCL in the 2015-16 season. But in order for it to work, I need an Internet connection. My cheapest option for Internet is another $49 per month through Comcast. That's $588 per year.

all together, I need to spend $1,236 per year just to watch every Flyers game

So all together, I need to spend $1,236 per year just to watch every Flyers game on TV. Maybe it's unfair to include my Internet cost in there because I'd be paying that anyway, but either way ...  that's fucking insane.

Another example is the insane one of Mary Clarke, one of our BSH writers who recently graduated from Penn State. Living up in State College -- just three-and-a-half hours drive from Wells Fargo Center and inside the same dang state -- she was considered in the Pittsburgh market, yet she got CSN Philly via her on-campus cable subscription.

Success, right? You'd think that if she gets the channel Flyers games are on, she can watch Flyers games. Nope.

"I spent the last two years at Penn State paying for GCL. Why? Because even though I had CSN Philly and it worked 21 hours on a normal Flyers game day, it blacked out from 7 until 9:30. Then I didn’t have NBCSN for the longest while because my apartment had the most basic cable package and I didn’t want to convince my roommates to buy the next few steps up so I could watch a few hockey games.

"It was the absolute worst. I felt like a minority fan even though I was only 3 hours away from my house. I also have fond memories of watching the 2012 Flyers-Pens series in the computer lab of my dorm cause campus dorms had bandwidth limits until my sophomore year."

This is the boat a lot of people are in. They have to pay through the nose just to be able to watch every game. Or they can break the law with something like HockeyStreams.com or an illegal online feed, but ... again, that's breaking the law.

Some people have literally no way to watch their team

Others don't even have the choice of doing that.

Consider that in the Philly market, the local channels that show Flyers games -- CSN and TCN -- are not available via satellite providers like DirecTV. So if you live in a place where you can't get Comcast or Verizon FiOS or another cable provider (such as the Pine Barrens of South Jersey where I grew up and have friends in this exact predicament), you literally cannot get the majority of Flyers games on your TV or computer no matter what you do.

Then there's the even more insane example of a town like Carlisle, Pa. Here it is on a map:

Carlisle is pretty equidistant to Pittsburgh, Philadelphia and Washington. But it's not really in any of those three markets. Yet the NHL considers it in all three. A Phillies fan in Carlisle wrote about this in 2013, and the same struggle applies to Flyers fans in that town:

In Carlisle, while it is technically a home market for the Philadelphia Phillies, almost none of their regular season broadcasts are shown here. In most areas of the Phillies home market, games are shown on the Philadelphia Comcast Sportsnet channel, however, in Carlisle we get the bizarro Mid-Atlantic Comcast Sportsnet channel which doesn't show any Phillies games and mostly concentrates on Washington and Baltimore sports.

They don't get CSN Philly. But because it's still considered the home market for Philly teams, you can't watch on NHL GameCenter or NHL Center Ice either. As that post above puts it, it's purgatory. You're simply out of options ... unless you want to move.

It's time for something to change

It shouldn't be this damn hard to watch a hockey game.

The cable/satellite companies and the TV networks want it this way because they make tons of money -- I mean, think about whether or not you would pay for cable if you didn't need it to watch sports. And if you're the NHL, you allow your product to be limited like this because NBC/Comcast is giving you a boat load of money for the rights to your product.

Cable TV is dying, and it's not going to be like this forever. We can foresee a world where you won't need to give hundreds or even thousands to a cable company to watch your favorite team -- a world where for $150 or $200 paid directly to the league, you can get every game in whatever form you want. None of this TV industry middleman nonsense.

But until the final nail is put in television's coffin, the blackout restrictions aren't going anywhere and the cost isn't going down. And it's hard to imagine anybody cares all that much -- other than the fans who have to deal with it. The league gets their money and the TV industry gets theirs, so why should we expect anything to change?