The common wisdom in Flyerdom is that Sean Couturier is a nice player, and really good defensively. "He's probably a good third line center, but his offense has never really developed." Well, when you look into the numbers, the real question appears to be if Couturier is the Flyers most effective 5v5 Flyers player, period.

For a moment, let's completely put aside defense, and look only at offensive effectiveness at 5v5. For starters, Sean Couturier excels in generating offensive possession as measured by relative Corsi. Looking at the past 2 seasons encompassing the Hakstol era, only Giroux beats Couturier in generating shot attempts when on the ice as compared to how the team fares without him. 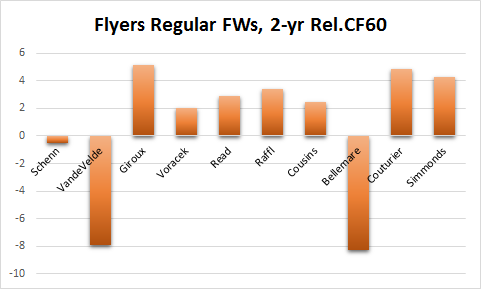 Okay, so maybe "Corsi's" don't really capture offensive creation. However, we can look at the (imperfect) tracking of scoring chances. By counting relative scoring chances, Couturier dominates other Flyers. He more than doubles up the next closest Flyer, Jake Voracek. 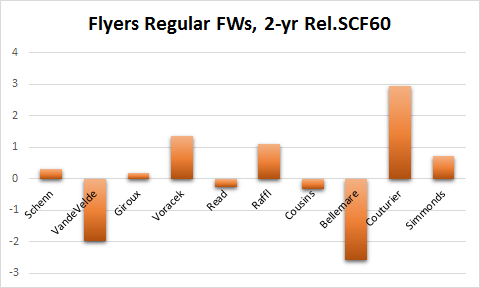 Alternatively, we can try to track the chance creation using expected goals as seen on Corsica.hockey. Doing so gives us largely the same result. Couturier is the clear number 1, followed by Voracek and Simmonds. 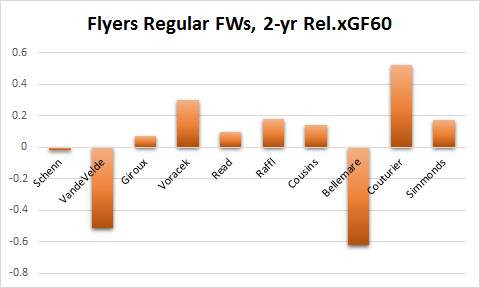 It seems that on paper, Couturier creates far more offense at 5v5 than any other Flyer. With this evidence of creating offense when on the ice, we can can also bring defensive performance back into the picture by looking at relative on-ice expected goals percentage.

On this count, Couturier obliterates all other Flyers. In fact, Couturier is 5th out of 359 full-time NHL forwards during this 2-year time frame on this measure. This puts him in the company of Connor McDavid, Sidney Crosby, and Patrice Bergeron. 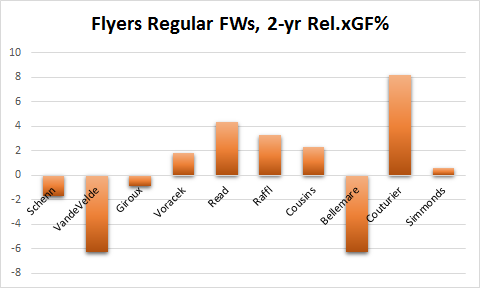 Even if you're still skeptical of these "advanced statistics," what about plain old points? After all Couturier has never even hit the 40 point mark in the NHL! Well, even there Couturier is the best Flyer, noticeably above Schenn, Voracek and Simmonds. 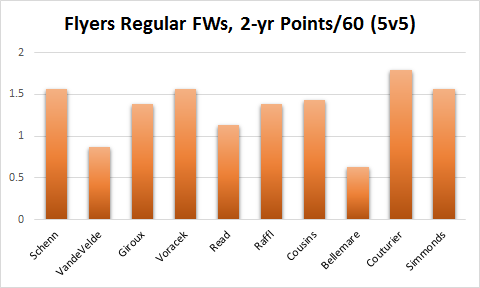 For point of comparison, this puts Couturier at 97 of the 359 NHL forward group mentioned above. Not great, but keep in mind that the Flyers have been on of the worst 5v5 scoring teams in the NHL under Hakstol, and Couturier gets the most difficult zone starts and hardest quality of competition amongst all Flyers forwards. All things considered, that's pretty impressive, and just so happens to be 2 spots ahead of Bergeron, for instance.

I'm not sure what else one can conclude. By basically every metric Couturier is the Flyers best player at 5v5 the last 2 years. By some measures, it's not even close.

Bottom Line: Couturier is Way More Effective than you Realize

Couturier looks slow out there. Often times he doesn't skate with the puck, and pulls up along the boards and tries to dink and dunk the puck around the ice. When he does that, he's not very effective. He's also terrible on the power play. The Flyers have used him on the 2nd unit in the Giroux half-boards spot, and again he looks terrible trying to create offense from the boards.

Because of how terrible Couturier has been on the power play, he will probably never put up 70 points in a season, but does this disqualify from the infamous "2C" spot? I don't think so.

Sean Couturier is the Flyers best 5v5 player, and his general uselessness on the power play can be forgiven or coached around. Even on that count however, I think he can improve. We are increasingly seeing that Couturier is most effective as a power forward going to the net, which actually harkens back to his initial draft scouting reports when he was 16 and seen as a possible #1 pick in the NHL draft.

So forget the question if Couturier is good enough and creates enough offense to be a "2C." He is already excelling, and he can be even better if utilized differently with play-making wingers at 5v5, or closer to the net on the power play.