The Philadelphia Flyers are giving up a lot of high-danger scoring chances. And by a lot, I mean a whole lot.

Share All sharing options for: The Philadelphia Flyers’ net-front woes

The Philadelphia Flyers are nine (9) games into their 2018-19 season and are successfully fulfilling their call of being the most mediocre sports team over the last five seasons. With a record of 4-5-0, your Philadelphia Flyers sit just below .500 and if the season ended right now (thank God it does not) the Orange and Black would miss the playoffs and send all of our souls into the sun as our (my) relentless optimism heading into this season crashed and burned due to lofty expectations met by sheer mediocrity.

Has it actually been that awful? In all seriousness, no, not really. After all, this season is only nine games young and teams like the Pittsburgh Penguins, San Jose Sharks, and St. Louis Blues are currently also on the outside looking in with slower starts to their season than expected. Hockey is a sport consisting of ebbs, flows, momentum, luck, skill, and speed all in nearly equal measure, so a slow, rough start to the season does not spell disaster for a team like the Flyers, who on paper have one of the more talented lineups in the NHL.

However, there seems to be a nagging issue that this team has faced since it first took the ice in game one of the 2018-19 season, and that issue is defending the front of their own net. What I do not mean by this is that the Flyers have no one to “clear the porch”, or out-muscle offensive opponents when dealing with net-front traffic. Generally, when the Flyers are setup in the defensive zone, things look okay. Is it great? No, not great, but I wouldn’t say it’s been terrible, at least at 5-on-5 hockey. The real issue seems to stem from neutral zone play and transitions, where the Flyers are caught either failing to clear their own zone with a clean exit, or fail to recover from an offensive turnover leading to an odd-man rush the other way.

Is it really just poor even strength play from top-end defensemen Ivan Provorov and Shayne Gostisbehere that are leading to such wildly inconsistent performances from this team? There may be more underneath the surface and with the help of our good friends Sean Tierney, Corey Sznajder, and Corsica.Hockey, we may be able to get to the bottom of this. Let’s get visual for a bit and see what the heat maps are telling us about this team.

This may not come as a shock to you, but the Flyers are giving up a lot of high-danger chances. What I will say is that the sample size for this analysis is only 420 minutes, but for nine straight games the Flyers seem to be prone to yielding the most dangerous area of the ice to the opposition. The eye test alone is enough for this one, but let’s compare how the Flyers look against the rest of the league in this area.

See all that deep, bright red right in front of the net and in the circle to the right of the net? That means that the Flyers are giving up a heck of a lot of shots on net versus what the rest of the league is doing on average. This area is the most dangerous area on the ice where shooting percentage goes through the roof and we truly find out what a goalie is made of. How does this compare to Flyers teams of year’s past? Let’s take a look!

So, as you can see the Flyers are defending quite differently in their own zone so far this season. I cannot stress enough how this small sample size does not spell disaster for this team so early in the season, but there is cause for concern that something is not quite right and they had better get it figured out sooner rather than later. This begs the question of what the actual root of the problem may be, and I think it may have something to do with the pace at which the Flyers are currently playing.

The Flyers are currently scoring at a pace of 3.33 goals per game played in all situations. This is nearly a half goal higher than last season’s pace. At 5-on-5, your Flyers are potting 2.22 G/GP, which is better than last year’s 1.93 G/GP. In contrast, the Flyers gave up 1.77 5-on-5 GA/GP in 2017-18, while this season has them at a whopping 2.45 GA/GP at 5-on-5. Couple this with a terrible penalty kill (don’t get me started), potent first powerplay unit, and speed to burn throughout the lineup, and the recipe is high flying action on both ends of the ice.

As you can see, the Flyers are generating quite a bit of high-danger shots themselves relative to the rest of the league. In fact, the scoring areas they’re getting to the most seem to be the complete opposite of year’s past, as we can see here looking back on the past two seasons.

So, the Flyers are giving up quite a bit of high danger scoring chances, generating a bit of high danger scoring chances themselves, and the eye test is matching up with what these charts and graphs are pointing out. The Flyers look to be playing with more pace up and down the ice, putting a premium on exiting the defensive zone with speed and controlling the puck into the offensive zone. However, problems arise when it seems that the players responsible for moving the puck up the ice simply just make too many mistakes, force too many low-percentage plays through the zone, or turn the puck over.

Yes. The first ten or so games of the NHL season don’t typically spell out how a team will perform for the remainder of the year. However, something needs to change drastically about how this team is pushing their pace of play, especially in the neutral zone. The coaches had better figure out how to slow the game down and find a better balance between playing aggressively with the puck, while also maintaining an ability to defend the rush.

Maybe this could point to why someone like Ivan Provorov has been struggling so mightily this season. The pace of play is pushing him to be at his best and it may just be taking some time for him to adjust to this style of hockey at the professional level. As we’ve seen in year’s past, the system the Flyers have played has been more conservative than most, so an uptick in the pace of play and aggression through the neutral zone may be having an effect on this team’s number one defenseman.

Do not misinterpret what I am saying. This is not an excuse. This is not a bail out for “The Big Cheese”. He needs to be better, as does the entire team, especially in the neutral zone and transition game. According to Corey Sznajder’s tracking of the Flyers’ first four games, Provorov has been targeted for 23 zone entries by the opposition. Of those 23 entires, 15 have been carried across the blue line and zero (0) have been broken up by Provorov, leading to 13 shots and 6 passes off of those entries. Much of the same can be said about the rest of the defense, as only six entries in those first four games have been broken up by a Flyers defender. This is an area that needs to improve across the entire team, and they had better due so quickly.

However, as stated, there is hope. Things have been trending in a more positive direction as far as goal-based metrics and possession-based metrics over the last week. These will be the last charts we take a look at, I promise (be sure to use the slider feature to get the full picture here)! 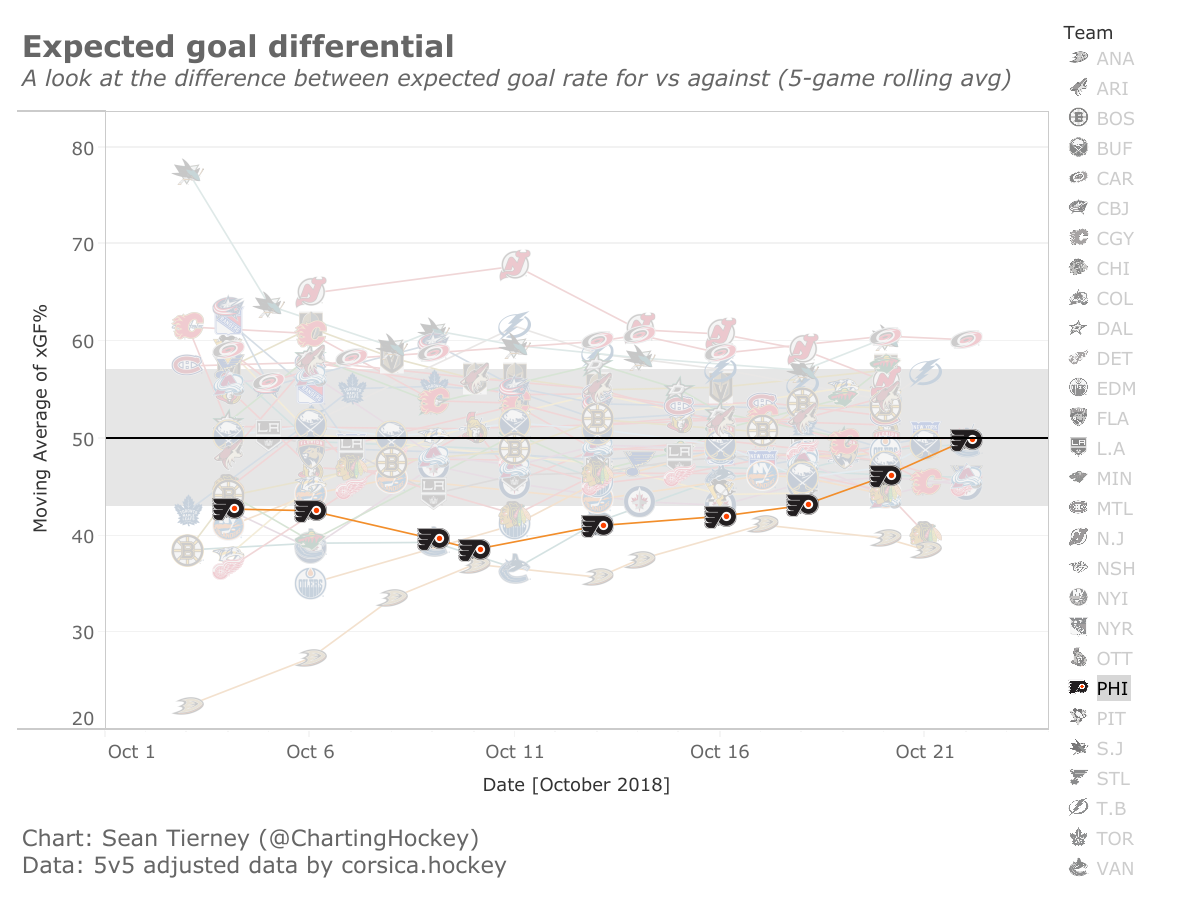 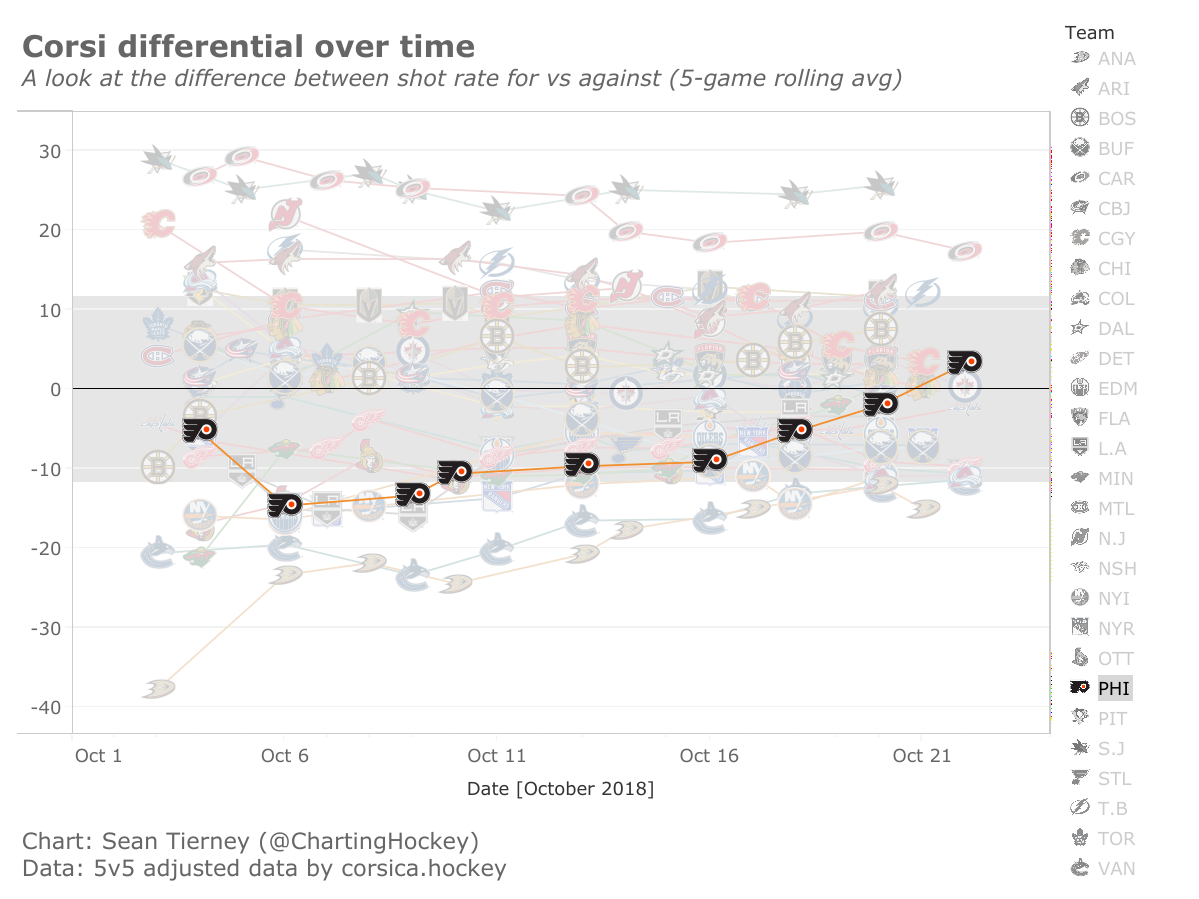 It’s still not great, but the Flyers are at least trending up in two key areas of predicting future performance as it relates to goal-based results. If head coach Dave Hakstol wants to keep his job and fulfill the hopes of many by winning a round in the Stanley Cup Playoffs, he had better figure out a way for this team to limit the amount of high-danger chances against during each game. Opposing teams are finding it far too easy to get to the most dangerous areas of the ice and are reaping the benefits more often than not. This is true for both even strength and shorthanded play, but the penalty kill is another article for another time.