How a strength became a weakness

When it comes to the Flyers’ power play, there’s been a dramatic drop-off.

Share All sharing options for: How a strength became a weakness

Last week Craig took a look at the Flyers’ penalty kill, and how it’s become one of the best in the league. It’s quite frankly refreshing, as it had been the team’s biggest weakness for a long time. But here’s the kicker; while the penalty kill seems to have finally been fixed, the power play may be at its lowest point in years.

Now, believe it or not, the Flyers have actually converted on a higher percentage of their power play opportunities this season than they had last season. Not by much, only one percent to be exact, but an increase is still an increase. In-fact, their scoring rate, which tells you more than a success percentage will, has also improved. By a full goal for every 60 minutes. So, how can this be a new low?

Over the last six seasons — going back to the 2014-15 season — the 2019-20 Flyers have the ninth-lowest expected goals for rate at five-on-four. They drop even further if we include two-man advantages, four-on-threes, etc., but we’ll be focusing on your run-of-the-mill power play that consists of five attackers, and four defenders. This season, only the last place Detroit Red Wings own a power play that has generated expected goals at a lesser rate than the Flyers.

Whether you’re looking at shots on goal, all shots, or expected goals, the Flyers’ power play has been ranked within the top-10 for a long time now. To find the last time that the Flyers failed to finish top-10 in all three categories, you have to go back to the 2012-13 lockout-shortened season. And even then they finished fifth in expected goals for. That’s concerning.

Goal-based stats have little predictive power, however, it’s worth pointing out that the Flyers’ power play hasn’t been able to convert at the rate that they were expected to for multiple seasons. And with the firepower that the Flyers have had over that time frame, it’s not for a lack of shooting talent. The reason could be as simple as luck not being on their side, their go-to passing plays becoming more predictable to goaltenders, or maybe it’s because the second unit had become so bad that you could walk away once they hit the ice without worrying about missing a goal ... but whatever the cause, I don’t think it’s a totally unimportant trend. Even as a firm believer in the process over the results, I think there may be something going on there.

But back to the current season, let’s have a look at what the 30th-ranked power play via expected goals looks like up against the best. 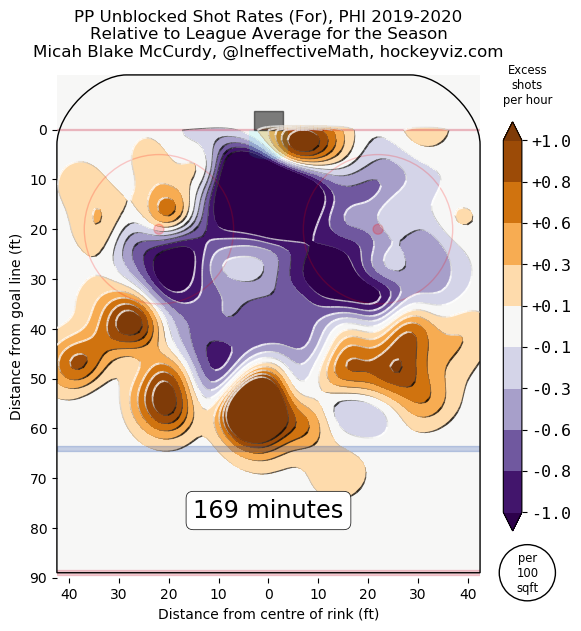 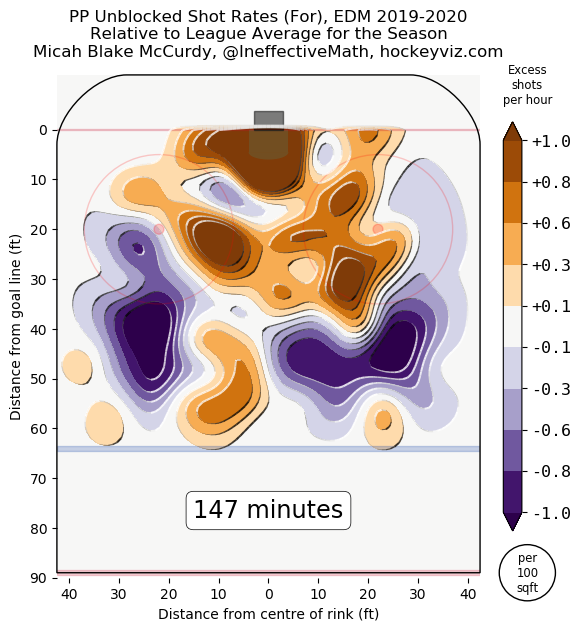 As the visualization shows, the Edmonton Oilers have taken a ton of shots from right in front of the net. This has led to them creating a whopping 8.88 expected goals per 60 minutes at 5-on-4 this season. Conversely, the Flyers’ map looks the opposite. They’ve taken more shots from the outside than the rest of the league has on average, while struggling to get shots off from the slot. This hasn’t been a problem in previous seasons.

Moving away from the mostly-static 1-3-1 formation that they had been running for years seems to have led to a dramatic drop-off in their shot and chance generation.

With an almost entirely new coaching staff, changes are bound to happen. But the Claude Giroux-Jakub Voracek swap had already began last season. It’s a move that we’ve been over before; it just doesn’t work. A list of players that are definitively better than Giroux on the left boards with a man advantage starts and ends with Alexander Ovechkin — and there’s no better distributor. It’s understandable to want different looks, but this swap has overstayed its welcome.

Voracek was asked about the power play’s more recent struggles following their loss to the Arizona Coyotes last Thursday, and had the following to say:

“We had a tough time (setting) up. The puck was kind of bouncing around on us for some kind of reason in the zone. Putting a lot of pressure on us ... just, in years past I think all five guys had a job to do in a certain area of the ice when in their zone. Right now, we’re not sure where to go 100%. That I think (is) a problem. If one guy doesn’t go, the other guy has no idea what to do. Better circling in the power play I think.” (x)

It’s no surprise that a unit that had been largely unchanged for so long, outside of a few personnel changes in the bumper spot, is so used to their old ways. And now that it’s been shaken up, they’ve looked lost at times.

Change isn’t bad. But when change isn’t working, sometimes future success can be found in past success.

The Ghost of power plays past

To this point, Shayne Gostisbehere has not played had a good season — particularly not at even strength. However, it’s a different story on the power play. The goals haven’t been there, but there are reasons to believe that if the power play is going to reignite this season, his fingerprints will be all over it.

Since entering the league Gostisbehere has been one of the premier power play quarterbacks, and has built up a ton of chemistry with what had been the top unit, namely with Giroux. So when he’s not out there, it’s no wonder that the power play’s shot creation decreases substantially. The only difference this season has been that the Flyers have scored at a higher rate when he’s been off of the ice, which can be explained by the natural ebbs and flows in on-ice shooting percentage.

It’s an extremely small sample size, but using Giroux as the determining factor for when the first power play unit has been on the ice this season, the top unit with Gostisbehere has generated 117.89 shots towards the net, and created 8.41 expected goals per 60 minutes. With Ivan Provorov, those figures drop to 72.06, and 3.88, respectively. Of course, that’s not all because of the two defenders, but it’s not as if this is a new development. Metrics that look to pull out teammate effects, like regularized adjusted plus-minus (RAPM), have always looked at Gostisbehere in a much more positive light in man-up situations.

Taking a look at the two’s individual shots at five-on-four this season makes it even more surprising that Provorov not only leads the Flyers in power play points, but also power play goals. On average a shot from the point turns into a goal roughly 2-3% of the time — likely a bit higher in power play situations due to better screening and pre-shot movement — yet despite a large majority of his shots coming from far out, he’s scored on 20% of his unblocked attempts.

Meanwhile James van Riemsdyk, for example, has only scored one goal despite having numerous chances from the most dangerous areas of the ice. He’s beyond due to pot a couple of power play goals, assuming he continues to get shots off from where he has so far this season.

Points, like anything that is void of context, can be misleading.

Can it be fixed?

The Flyers have five players that have shown to be top-end power play performers in Giroux, Voracek, van Riemsdyk, Gostisbehere, and over the previous two seasons, Sean Couturier. They didn’t just all lose their effectiveness overnight, and in the case of Giroux and Voracek, giving them more time on the sides of the ice that they’re most comfortable playing on probably goes a long way. Those five skaters together likely has the highest ceiling of any power play unit that you can construct with this roster, and should be the starting point for a potential fix.

It has a top-flight quarterback, two of the league’s premier passers along the boards, and two net-front presences who have scored a ton of goals in their careers from in close. You give that unit an extended look in their usual spots, and the goals are likely to come.

However, nothing is guaranteed. Going back to the old way might not work, but they need to try something. Their results haven’t been awful yet, but if they don’t start generating more, the power play is just going to continue to go downhill. If for whatever reason the original set-up with Giroux on the left boards and Voracek on the right is no longer wanted, it might be time to move on from the 1-3-1 completely. Perhaps there’s untapped potential in this team running their power plays from behind the net.

One way or another, getting the power play clicking should be a top priority moving forward. There are a lot of things to like about this team. But the power play? That’s just not one of them.

Data courtesy of Evolving-Hockey, and HockeyViz.