After a much debated rookie campaign, Travis Sanheim’s sophomore season quieted doubters as he rose from the team’s sixth defenseman on the depth chart in October, to their unequivocal number two by the end of December.

In a season that will go down as one of the most tumultuous years in Flyers history, Sanheim’s play is one of the few positives we can look back on. One word that really stands in regards to Sanheim’s 2018-19 campaign is progression. And not only from last season to this season, but on a game level as well.

First of all, let’s talk about that first number — he played all 82 games! While it feels a little silly to think about it in now, Sanheim not being a healthy scratch even once this season was far from a lock, and I’d argue a pretty big deal after how last season progressed. But it wasn’t just the amount of games he played that jumped, it was many things.

Last season Sanheim finished the regular season with two goals and eight assists in 49 games — about a 16-point pace over the course of an 82 game season. This season he more than doubled his per game pace with 35 points.

Among defensemen that played at least 250 minutes of 5-on-5 hockey this season, Sanheim ranks 23rd in primary points per hour. Points aren’t that big of a deal when it comes to evaluating defensemen, but I do think this is important to make note of given that primary points are a lot more predictive of future production than their secondary counterparts.

When it comes to the on-ice numbers it’s clear that weighted shot metrics, like expected goals, are kinder to his season than Corsi. The reason for this is that when Sanheim was on the ice this season, the opposition took an abundance of shots from the outside rather than from dangerous scoring areas. The overall number of shots against didn’t change much, but the quality dissipated whenever he took the ice. 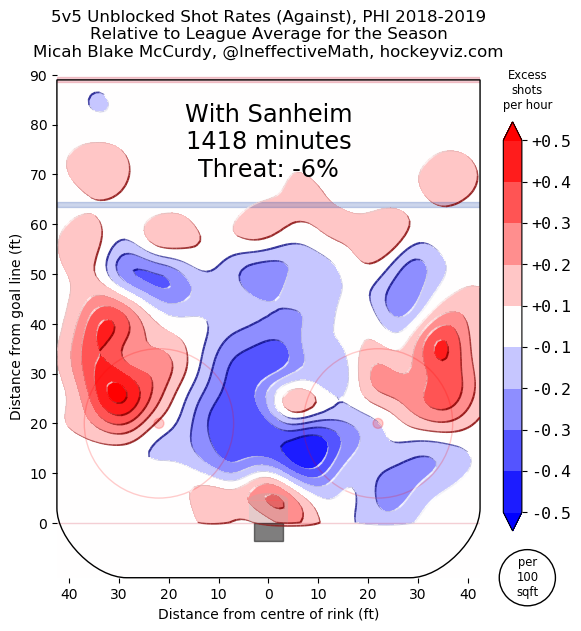 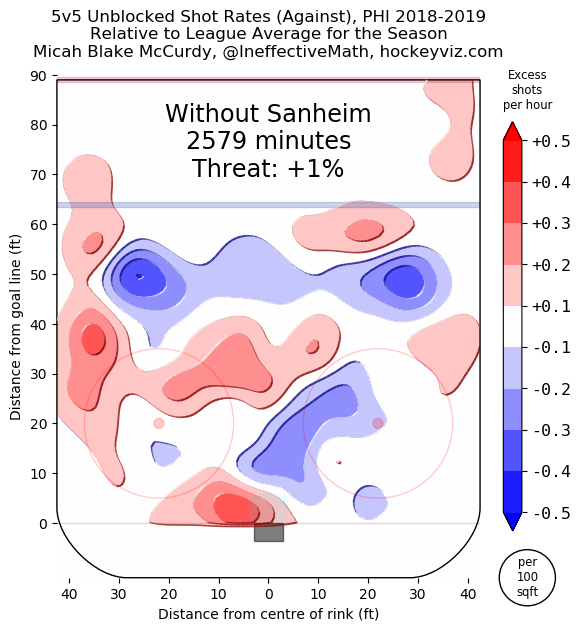 While his shot impacts relative to the rest of the Flyers’ defense remained positive, they actually weren’t as good as they were a season ago. This is not a bad thing though given the change to his usage this season. One statistical improvement is his goals for percent, which was largely driven by his bad luck not carrying over.

In 2017-18 the Flyers scored on just 6.25% of the shots that they took while Sanheim was on the ice during 5-on-5 play, a stark difference from this season when the Flyers scored on 9.46% of their shots with him on the ice. If his on-ice shooting percentage had been that high a year ago, he would have had a 53.3 goals-for percent instead of the 46.15 mark that he wound up with.

As impressive as his season was by the numbers, maybe the biggest development, and the most important one, was his ability to convince his coaches that he was worthy of the increase in ice time that began to receive. Some have said that the ability to convince a coach that you’re actually good is a skill in itself, and it happened for Sanheim under Scott Gordon and Rick Wilson’s watch. Of course he had previously built trust with Gordon during his time with the Phantoms, but it was Wilson’s call to increase his role prior to Gordon taking over in late December. However now he will have to prove it again, as neither will be returning to the Flyers’ bench in 2018-19. Now it’ll be up to new head coach Alain Vigneault, and new defensive coach Mike Yeo, to decide where, and how much, Sanheim will play.

The Flyers sent a message with their new coaching staff

Did this player live up to our expectations for this season?

Sanheim easily surpassed our expectations for this season. Not only did he prove that he’s the play driver that we thought he was, but he showed us that he can at the very least hold his own against other teams’ best players. The word “consistency” gets thrown around a lot and is generally overused, but that’s what Sanheim was for the Flyers. Consistent when little else was.

What do we expect from this player next season?

In short, another strong season. He’s proven to be a quality top-four defenseman and will likely challenge for a top pair role again this season depending on the changes made to the Flyers’ defensive corps. That’s what makes this question so tough, though. What type of role is he going to play? If Shayne Gostisbehere gets traded, does he get time on the first power play unit? If they add a top-pair defender like Jared Spurgeon, for example, how much does his role get decreased?

I guess the simplest thing to say is that we expect growth of some kind. While it’d be nice to see another increase in his offensive production, and the ability to do so is certainly there, this team’s defense feels so up in the air that it’s hard to really project what he’s going to do next season.

What would we like to see this player improve on?

The number one thing has to be defending zone entries. Through the 43 Flyers games that Corey Sznajder (@ShutdownLine) has tracked from this past season, Sanheim has the worst carry-in against percentage at 74.5%. And while he doesn’t possess the lowest breakup rate, only Andrew MacDonald and Robert Hagg rank below him. Not ideal! He did well at defending against rush chances in the AHL, and with time he could feasibly inch away from the bottom of the league territory into a more average to above league average standing.

Since we don’t really know how well he would do this isn’t necessarily something that he needs to improve on, but I’d be interested in seeing how good of penalty killer he can be at the NHL level. After Ivan Provorov and Radko Gudas, the next two Flyers defensemen with the most ice time in penalty kill situations last season were Hagg and MacDonald. Sanheim has the tools to be an all situations defender and while the early returns are solid, his just over 47 minutes aren’t enough to draw any type of conclusion.

All data used courtesy of Corsica.hockey unless specified otherwise.