Exploring the Flyers’ power play woes against the Canadiens

The Flyers failed to convert on any of their twelve power play opportunities against the Canadiens this season.

Share All sharing options for: Exploring the Flyers’ power play woes against the Canadiens

Yesterday, Kurt wrote about how the Flyers need to — and should — win the special teams battle against their first-round opponent, the Montreal Canadiens.

While the Canadiens were a strong five-on-five team, they were one of the worst teams in the league away from even strength. Despite this, the Flyers’ power play went a staggering 0-for-12 in three games against Montreal in the regular season. Was their lack of power play success simply a random occurrence, or was there more behind their failure to convert? And if so, does something need to change?

Since the number of power play opportunities that a team failed to convert on is not the best way to judge efficiency, let’s look at how much time we’re working with here. This season, the Flyers saw just over 24 and a half minutes (24:36 to be exact) of five-on-four play against the Canadiens. In that time they generated 36 shots at the net, 21 of which being on goal, and zero goals. Let’s compare their shot rates against Montreal, to their rates against the rest of the league.

OK, that’s interesting. There was essentially no change in the amount of shots that the Flyers generated against the Canadiens versus the rest of the league. However, there is a big difference in the quality of the shots that they created. The Flyers created 1.55 fewer expected goals (xG) per 60 minutes against Montreal than they were able to create against the 30 other NHL teams. For comparison, the difference in the top ranked power play by xG creation, and the bottom ranked power play is 2.61 — 1.55 is no small drop-off. It’s not just that they failed to convert on their chances, they also weren’t creating as many as they did on average. So why did they perform so poorly against the Canadiens, who were one of the worst penalty-killing teams?

The good news is that it all ties back to one game back in early November.

To make things a bit simpler, let’s remove the second game of the season series from the equation. In that game the Flyers had four minutes of power play time, and two shots on goal. We’ll touch on what went wrong in this game in a moment, but for the time being let’s turn our focus to their first meeting on the 7th of November, and their most recent meeting on the 16th of January. 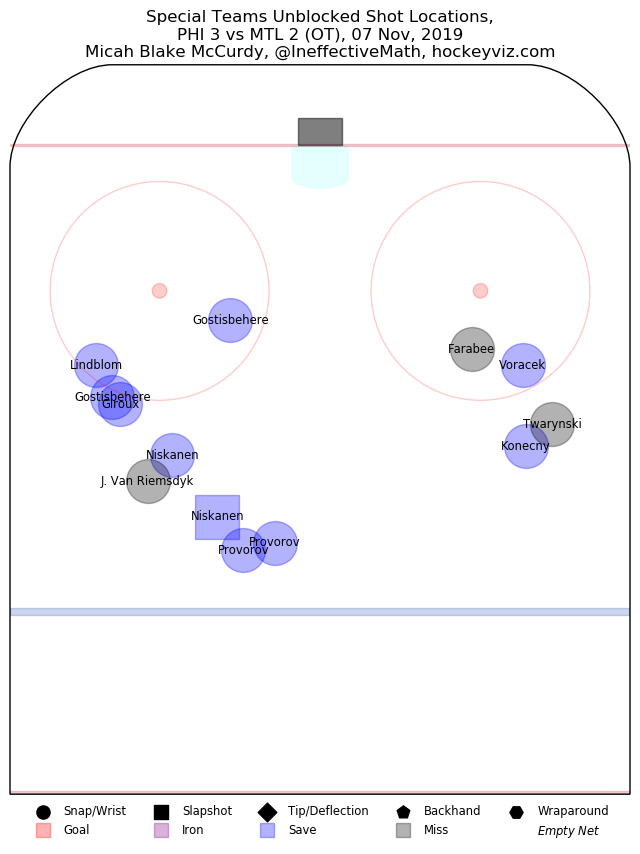 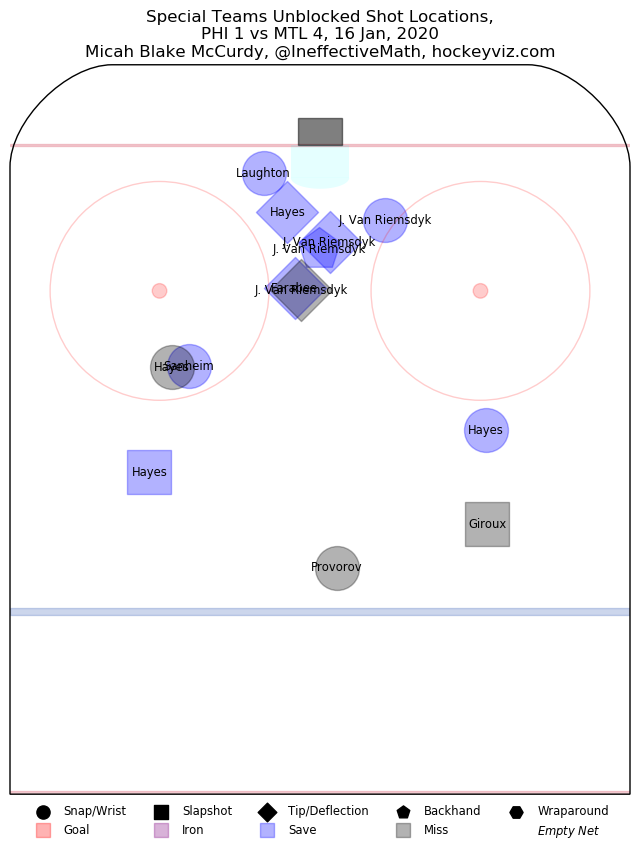 In the November 7th game, the Flyers had eleven and a half minutes of power play time and delivered just two scoring chances — one courtesy of Shayne Gostisbehere, the other Joel Farabee. On January 11th, the Flyers’ power play had eight minutes to work with, and created nine scoring chances. In expected goals, 0.52 versus 1.11. Those extraordinarily poor eleven and a half minutes bury their season totals against the Canadiens, and it’s also worth nothing that they did score just two seconds after one of their power play opportunities had expired in that game.

The biggest problem that night had little to do with what the Canadiens were doing, but what the Flyers were doing themselves. There was a total lack of creativity, and this wasn’t out of the ordinary early in the season. Back in December we talked about how the Flyers’ power play was one of the worst in the league at creating quality chances. There was little consistency with either unit, and players were in roles that didn’t seem to fit their strengths. On the second unit, Sean Couturier was positioned along the right boards, while Matt Niskanen was opposite of him on the left. And for the first unit, a lot of their struggles in this game revolved around their number one defenseman.

To my count Ivan Provorov mishandled the puck on six different occasions, twice unforced in transition, and when your power play quarterback is that off, you’re going to have a tough time scoring. But it wasn’t just Provorov. Both Claude Giroux and Jakub Voracek weren’t making the crisp passes we’ve grown accustomed to watching them pull off. After all, there is a reason that the Giroux on the right boards experiment started in the first place. The passing and shot selection in this game just seemed off in general. Montreal’s penalty kill deserves some credit, but the Flyers were really shooting themselves in the foot during the power plays in this game.

Their third and most recent meeting saw the power play appear substantially stronger. They sustained consistent offensive pressure for a minute and a half straight on one of their opportunities, and a Couturier redirection almost found the back of the net, trickling just past the post. Further, this strong performance actually came with Giroux playing the right side of the ice, which, as we’ve gone over more than enough times during the season, is not a great set up. If that formation can pick apart Montreal’s penalty kill and create as many chances as they did, one has to imagine that a unit with Giroux in his usual spot can do the same.

In the second game of the season series, the power play’s struggles were, in my view, tied to one thing; a lack of controlled entries. In the first and third games, the Flyers entered the zone with control on 62 percent of their successful entries per my own tracking. Based on Corey Sznajder’s season data, that’s a normal percentage for the Flyers. But in the November 30th game they entered with control just once on six entries, and of their five uncontrolled entries, three were at least partially taken care of by Keith Kinkaid. They could not get set up because they rarely had possession of the puck in the offensive zone. This is why the shot map for this game wasn’t included — in the four minutes they took only four shots, two being on target.

While he might not have been in goal on that particular night, helping his defensemen with dump-ins is something that is a part of Carey Price’s game as well. He’s lauded for his puck-handling constantly. They’ll need to hit the blue line with speed and keep the puck away from Price or they’ll find themselves skating back towards their own zone way more than usual.

Something evident in all three games was the Canadiens’ aggressiveness on the penalty kill, even going as far as to pressure the puck-carrier well into the Flyers’ defensive zone. They gave them fits in the neutral zone to varying degrees in each game, with the worst of it coming in the earlier matches. They’ll do what they can to make you dump the puck in because they know that they can rely on their goaltender to help clear the puck.

Verdict: In general, the Flyers’ power play was not bad against the Canadiens because of something that the Canadiens were doing to counter their plan, nor were they as bad as the 0-for-12 figure makes it seem. They struggled in two games, for the various reasons that we discussed, and despite not scoring, had a really good showing in their third meeting. And like with everything, we have to be careful with small sample sizes. It’s 24 minutes spread across three games — it’s hard to pull meaningful conclusions from that at all. The maing reason that I wanted to explore this was because there is little doubt that the Flyers going 0-for-12 during the season will be brought up the first time that a Flyer draws a penalty. Season averages are much more telling, and they say that the Flyers should have the special teams advantage heading into the series.

With that being said, the power play didn’t exactly look like it was ready to catch fire during the round robin tournament, and could still pose a problem when the puck drops tomorrow night. But even then, the power play was nowhere close to being the mess that it was back in November. The biggest x-factor now is what version of Price the Flyers will be seeing. The 2015-version of Price made a surprising reappearance in the play-ins, and could show up once more in the first round.