Share All sharing options for: Join Broad Street Hockey and Puck Daddy for a 2014 NHL Draft Party in Philadelphia 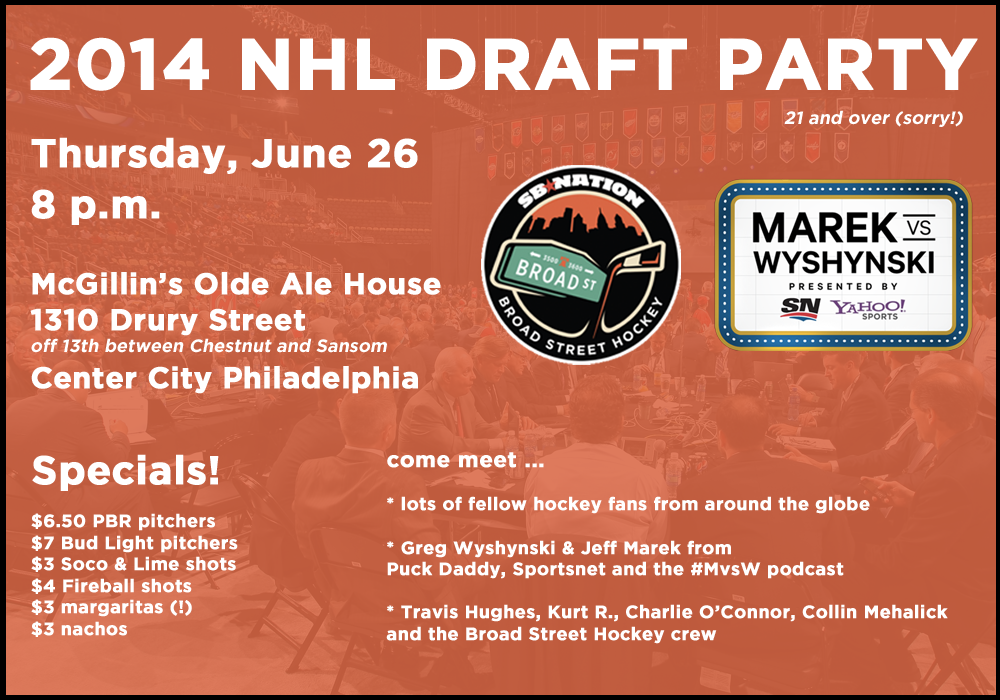 Heard you needed plans for Thursday night. Made 'em for ya.

Come join the Broad Street Hockey crew -- Travis, Kurt, Albert, Collin, Charlie, and maybe some others -- as we kick off NHL Draft weekend in style on Thursday, June 26 at 8 p.m. We'll be gathering at McGillin's Olde Ale House in Center City. Our co-hosts are our friends from Puck Daddy and the Marek vs. Wyshynski podcast -- namely, Greg Wyshynski and Jeff Marek, naturally.

21+ only. There will be drink specials, as you can see above. Most of them are exclusive to just our group, too, so we'll have bragging rights on everybody else in the place. Cheap pitchers, cheap shots, cheap margaritas. Just a nice night of hockey in June. (And if you care about the Sixers in the draft, the party starts after they make their picks. And they have TVs at McGillin's, damnit.)

We'll be there beginning at 8. Bring friends, and be sure to let us know in the comments, via email or via Facebook and Twitter if you're planning to come. Let's give the hockey world a great welcome to Philadelphia for the 2014 NHL Draft.