After falling to the Flyers as the eighth pick in the 2011 Draft, Sean Couturier quickly established himself as a defensive force in the NHL. While his offensive numbers are tame, that has more to do with the role he's being asked to play than anything.

Share All sharing options for: Philadelphia Flyers Midterm Top 25 Under 25, No. 2: Sean Couturier

When the Flyers traded Jeff Carter to the Columbus Blue Jackets in 2011 for Jakub Voracek and first and third round picks, I don't think anyone thought Sean Couturier would be available at the eighth pick in the first round. For a time, it was thought that Couturier would be the number one overall selection, but mononucleosis put a damper on Couturier's Junior season and he ultimately fell into the Flyers' laps.

He made the opening night roster and ultimately stuck with the team for the entire season, despite flirtations with sending him back to Juniors before his entry-level contract kicked in. While his surface-level statistics didn't jump out at you with 13 goals and 14 assists for 27 points in 77 games, he quickly found himself playing a defensive specialist role as the fourth line center, where putting up points is not the objective.

While he only averaged just over 14 minutes a game in his rookie season, he was a vital piece of the penalty kill, playing 2:41 a game while down a man, trailing only Max Talbot in that regard. He also saw some extremely difficult minutes as a rookie and passed with flying colors.

He had the most difficult zone starts on the entire team, starting only 39.5% of his shifts in the offensive zone. That was the 24th most heavily skewed zone starts in the entire league among forwards; and only two of those players had a Corsi For Percentage (percentage of shot attempts while on the ice at even strength) better than Couturier's 49.6%.

He also mostly played with "meh" linemates while mostly playing against some incredible competition. Per Behind The Net, Couturier's most frequent linemates his rookie year were Max Talbot and Zac Rinaldo. His most frequent opponents? Evgeni Malkin, Chris Kunitz (of Olympic fame), and John Tavares.

Think about that for a moment. A rookie who played the season at age 18 and 19, almost always started his shifts in his own end (24th hardest in the NHL), with not so great linemates, against some of the league's best, almost broke even with respect to shot attempts. That's kind of ridiculous.

This all came to a head in the postseason when Sean Couturier was tasked with shutting down Evengi Malkin...as a rookie. He held Malkin off of the scoresheet in two of the six games; and while Malkin had eight points, four of them came on the power play. Let's also not forget Couturier had himself a hat trick in a four point game in this same series, while giving Malkin fits and causing a few Malkin tantrums. Couturier had a arrived as a true shutdown player at only 19 years old.

Heading into his sophomore campaign, albeit shortened by the lockout, expectations were sky high for the young center. After a successful stint with the Phantoms during the lockout people were ready to see #14 really take a major step in his second season.

At the end of the year Couturier found himself with a stat line of four goals, 11 assists, and 15 points in 46 games. Fans and media alike were disappointed, and the talk of a "sophomore slump" were rampant.

However, I call the numbers in that stat line above "surface-level statistics" because they do not tell the entire story. We have to look beneath the surface a bit to see the big picture (and I encourage everyone to do this with any and all players). When it comes down to it, Couturier simply was not being asked, nor put in a position, to generate points.

While his minutes did increase slightly in his second season, to just under 16 minutes a game, he was still being tasked with incredibly difficult assignments.

Couturier's zone starts actually got even more skewed. Going from 39.5% in his rookie year to 32.4% in his sophomore season. That was the 11th most difficult in the entire league. And again, Couturier found himself playing with not so great linemates and against the best competition.

He had the fourth worst linemates of anyone on the team (using Corsi Relative Quality of Teammates) at -2.637, ahead of only Zac Rinaldo, Ruslan Fedotenko, and Adam Hall.

At the same time, Couturier was playing the second most difficult matchups on the team (using Corsi Relative Quality of Competition) at 0.952, trailing only Max Talbot.

When you're almost always playing in your own end of the ice, with garbage linemates, against some of the best competition, you are inevitably going to have a tough time. You almost can't stack the odds against you any further. And yet ... Couturier managed a 2.1 Corsi Relative, indicating essentially that ~2 shots more per 60 minutes of even strength ice time were directed at the opponent's net while he was on the ice than when he wasn't. In other words, he was driving playing towards the offensive zone and generating shots.

If we look league-wide, among all forwards having played 30 games or more that had offensive zone starts of less than 40%, a Corsi Rel QoT of -2 or worse, and simply a positive Corsi Rel QoC...there were only two players in the entire NHL with positive Corsi Relative ratings: Sean Couturier and Mikhail Grabovski. (And we all know what happened with Grabovski; Toronto buys him out, he goes to a team willing to give him offensive minutes, and he's on pace for a 55 point season.)

So here we are in 2013-2014 and Couturier continues to grow. He is still "only" the third line center, but he's seeing over 19 minutes a game at this point. He still continues to see heavily defensive minutes. He has the second fewest offensive zone starts on the team (43.1%). He also has the fourth most difficult quality of competition (trailing Giroux and Voracek who see tough matchups as the top line, and Read, his own linemate).

I don't think it's a coincidence that when we see Couturier with slightly less dramatic zone starts, better linemates (Read consistently, for one), and a bit more ice time, that we see the his offensive numbers rise a bit. He currently sits at nine goals, and 19 assists, for 28 points in 59 games; that's good for just about a 39 point pace in a full season.

When it comes down to it, Sean Couturier is already a borderline elite defensive center at age 21; and he may very well have been one at age 18. While his offensive numbers are far from flashy, I think it mostly has to do with the fact that Couturier simply is not being put in a position to put up offensive numbers. I mean, you don't need to be an analytics whiz to look at this graph and see "hmm Couturier (and Read) sure seem to be getting used differently than everyone else". 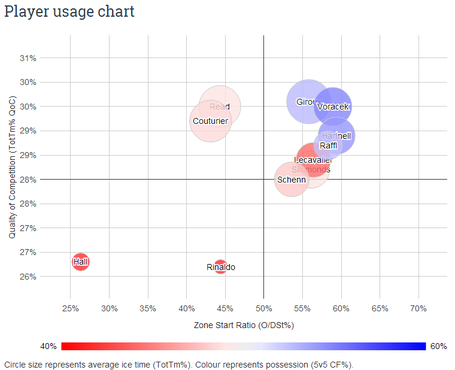 There are certainly times when Couturier seems to miss a golden opportunity, and I do think he has a lot of room for growth with respect to his offensive game. However, when looking at Sean Couturier, the key is looking beyond the surface to what he is being asked to do game in and game out. At only 21 years old, Sean Couturier is one of the best young centers in hockey.

How we voted for Sean Couturier: